After a strong start, the S&P 500 spent the remainder of the third quarter trading in a narrow band. It finished with a 3.31% gain for the quarter and 6.08% for the year. Smaller stocks outperformed the S&P 500 for the quarter and year-to-date after a multi-year period of underperformance. Additionally, international stocks outperformed the S&P 500 during the third quarter helped by sharp increases in emerging market stocks. At the sector level, results were mixed with four in negative territory and six showing positive returns no more than 4.03%. The lone exception was information technology which rose 12.44 % in the quarter thanks to the strength in Apple and corporate technology spending. The weakest areas were the utility and telecom services sectors which fell 6.72% and 6.60%, respectively.
Treasury rates moved higher for the quarter across all maturities. The lack of fallout from Brexit and improving payroll data were contributing factors. In other markets, gold prices, oil prices, and the Dollar Index all traded in narrow ranges during the last three months as a level of calm returned to financial markets. 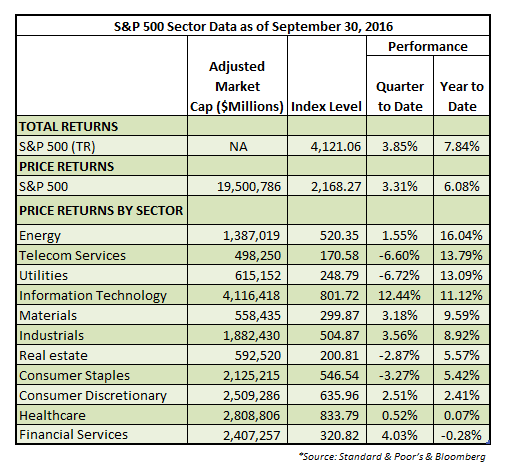 Presidential elections frequently generate market uncertainty, especially when an incumbent is set to step down. Policies can differ greatly depending on who is elected, and this year is no different. The uncertainty related to a Presidential transition can lead to volatility as investor grapple with the effects of varying policies regarding the economy, taxes, regulatory environment, etc. Instead of focusing on differences in the two nominees, NPP thinks that it is important to concentrate on similarities and acknowledge that a Presidential change creates uncertainty. It should be remembered that either candidate is likely to face a divided Congress and have trouble getting legislation passed without compromising. Moreover, both candidates are historically unpopular and are unlikely to have a broad mandate to make sweeping change. Each candidate has discussed increasing infrastructure spending. Each nominee would like to repatriate corporate earnings trapped overseas and their plans seem fairly similar. They have both discussed the problem of the rising cost of child care. Their economic and tax policies differ, but it seems likely that if either nominee gets their way, the budget deficit will rise. This would probably happen to some extent due to an aging population regardless of who is elected President. However, each candidate is focused on growing the deficit to reinvigorate the economy which is inflationary on the margin.

Inflation Trends may be Bottoming

Inflation has been muted for a while now. The year-over-year change in the Consumer Price Index has been below two percent since August of 2014 (see chart below) and even turned slightly negative in early 2015 due to falling energy and commodity prices. The CPI Index was up 1.1% year-over year in August. Investors currently expect inflation of around 1.4% a year for the next five years compared to the twenty and thirty year averages of 2.2 and 2.7%, respectively. Inflation readings have been even lower throughout most of the rest of the developed world. NPP thinks that for the first time in a while, there is a chance that inflation readings are going to start inching higher. 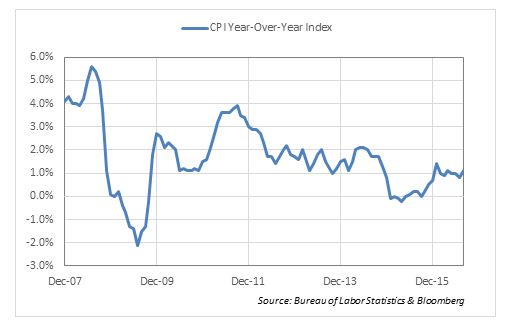 Commodity prices stabilized after oil bottomed in the first quarter of 2016. The year-over-year change in oil prices will turn positive in the fourth quarter if oil prices maintain their current level. The dollar has stabilized and this will also lead to a tick-up in inflation. Healthcare costs continue to rise. Housing costs have been rising for a while and are now increasing at an annual rate that’s as high as it has been since 2007. There is still excess capacity in the economy and capacity utilization remains low, but certain segments of the economy are having trouble finding qualified workers and NPP thinks wage inflation will continue to creep higher.
Central bankers have used monetary policy to try and ignite global growth since the Great Recession. Despite their efforts, growth has been tepid. It seems that people are starting to doubt the efficacy of extreme monetary policy both domestically and abroad. There are indications that policymakers are pivoting towards fiscal policy to try and ignite the global economy. NPP is not sure that they will succeed, but the risks of higher inflation rises in a world with expansionary fiscal policy combined with easy monetary policy.

While consumer inflation trends may be moving higher, the producer price index is languishing and has been mired in deflation (see chart) for almost two years now. Simply put, corporations have little pricing pressure. This is due in part to excess capacity in the manufacturing, commodity, and retail sectors, a strong dollar, and the internet. 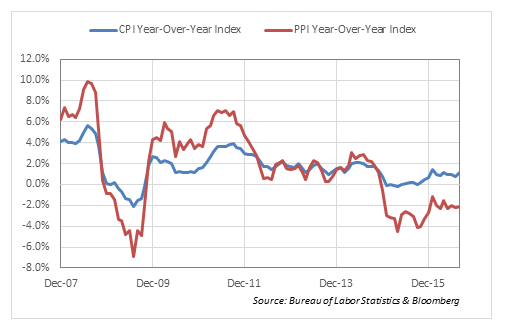 Profit margins have declined after peaking in the third quarter of 2014. Total compensation has increased as a result of a shrinking unemployment pool, minimum wage increases, and increased healthcare costs. Not surprisingly, S&P 500 earnings have declined for six quarters now. The prior quarter was no exception. S&P 500 earnings declined 3.97%, while sales dropped 0.25% from the prior year. The profit margin squeeze shows few signs of abating. Despite this, analysts are still projecting S&P 500 earnings to grow more than ten percent in 2017. NPP doubts this will happen. We anticipate earnings will grow, but at a rate consistent with global GDP growth. Global growth remains weak and we are skeptical that it will speed up enough to generate double digit earnings growth next year.

Employment is improving and inflation is starting to tick up. NPP believes that the Federal Reserve will probably raise rates in December. Federal Reserve tightening actions have preceded a pullback in stocks the last two times they occurred. Additionally, we expect interest rates to move a little higher during the fourth quarter and expect this to weigh ever so slightly on stocks. Nevertheless, we think that a pullback will represent a buying opportunity for investors.