Global markets soared in 2017 as equities in the U.S and abroad experienced great returns. The S&P 500 finished the year up 19.42%, yet underperformed many international markets before accounting for the dollar’s 9.87% decline. For the first time in the history of the index, the S&P 500 rose in all twelve months of 2017 on a total return basis. In some ways, the lack of volatility was more impressive than the returns generated by equities. The rally was led by the information technology sector as mega cap technology stocks such as Apple, Facebook and others rocketed higher. The worst performing sectors were the safe sectors: consumer staples, utilities, real estate and telecom services all underperformed the S&P 500 by at least eight percent. Energy stocks fell 3.8%, underperforming the S&P 500 despite the 12.47% rise in oil prices this year. The energy sector was the best performing sector in 2016, so there was a bit of a reversal of 2016’s outperformance. Nonetheless, the disconnect was a little surprising.

Activity in the bond market was mixed. Credit outperformed safer investments in 2017 as investors continued their search for yield. The Federal Reserve Board policy contributed to the flattening of the yield curve. The Federal Funds rate was raised by 0.75% in 2017, pushing shorter duration Treasuries higher. The yield on two-year Treasury securities rose 0.69% to 1.88%, a level last reached in 2008. Five-year Treasury Notes rose 0.28%, but the ten-year Treasury Note barely moved. Meanwhile, the yield on thirty-year Treasury Bonds fell 0.33% to end the year at 2.74%.
The CRB BLS Commodity Index rose 2.19% during the year, but that hid the rally in industrial metals such as aluminum, copper and zinc. These three metals rose over thirty percent for the year. Meanwhile, a basket of agricultural commodities declined in 2017. Gold rose 13.09%, partially helped by the U.S. Dollar's depreciation. 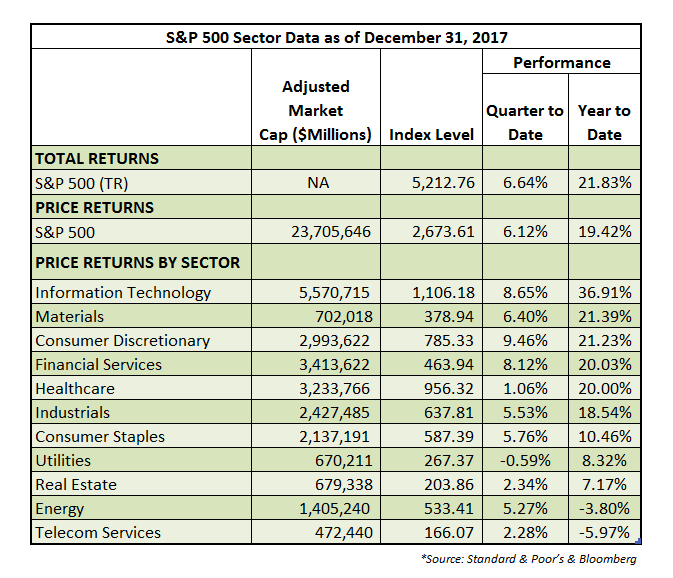 The new tax plan will give a boost to corporate earnings. The reduction in the top corporate tax rate from 35% to 21% has likely been partially responsible for the recent strength in the S&P 500. Some companies and industries will benefit more than others. Certain companies may see their tax rates rise and their earnings fall due to the recent tax bills. Companies with all their revenues generated in the United States such as regional banks and retailers that have higher effective tax rates stand to benefit. Meanwhile, some companies with broad global operations and the ability to move earnings to lower tax locales may see little benefit. Others may even see their tax rates rise as certain loopholes are closed. Companies that have recently inverted and moved their corporate headquarters overseas may face higher tax bills in 2018. Many U.S. multinationals have earnings trapped overseas, and they will now be able to repatriate those earnings at a much lower rate. Other companies have large deferred tax assets or liabilities on their balance sheets. Some will take a short-term hit to earnings, while others will see a short-term earnings gain. Recently, beneficiaries of the new tax code such as banks, traditional retailers and other domestic-focused companies have rallied, while several global technology companies have lagged. A couple months does not constitute a trend. NPP believes that will depend on a pickup in economic growth and stable interest rates more than the new tax code.

Last year marked a positive inflection in corporate earnings. After flatlining for a little over three years, 2017 S&P 500 earnings per share are projected to rise about twenty-one percent over last year’s numbers. NPP believes that additional revenue and profit growth will be required in 2018 for the S&P 500 to rise next year. 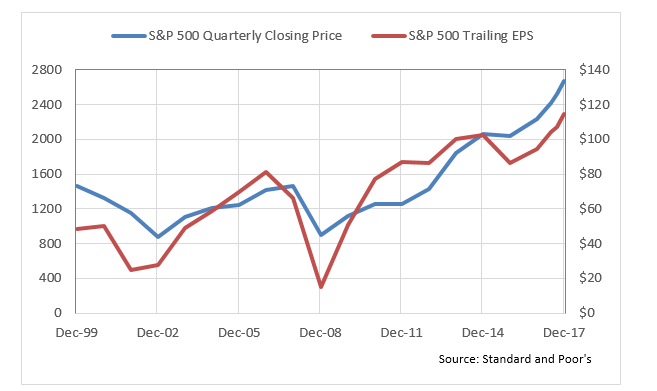 Fortunately, the first half of 2018 is likely to see the trend of robust sales and profit growth continue. In our view, the issue is whether profits show continued improvements in the second half of 2018 when year-over-year comparisons become tougher. Short-term interest rates are likely to rise in 2018, and while global monetary conditions are unlikely to tighten, the Federal Reserve’s current policy guidance implies that those conditions will be less accommodative. Assuming that Europe’s economy maintains steady economic growth, the European Central Bank will probably reduce the monetary spigot at some point in 2018. If rates rise, income-starved investors may rotate back into bonds putting pressure on equities later in the year.

Equity market volatility reached extremely low levels in 2017, some of which have never been seen before. One measure of volatility is drawdown, which calculates the peak-to-trough decline of an index, stock, etc. Based on daily closing prices, the peak-to-trough decline of the S&P 500 during 2017 was 2.8%. This is a historical anomaly. You must go back to 1995 to find a year where there was not one month that had a loss of at least 2.8%. 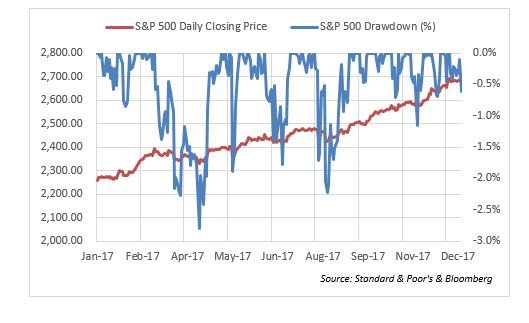 Even more incredibly, the S&P 500 was up every month in 2017 on a total return basis. This has never happened since the inception of the index in 1970. It has now increased each month for the last fourteen months. Looking at the chart, you can see many dates when the drawdown was zero, indicating how many fifty-two week highs there were in 2017 and showing just how relentless the equity rally was.

The CBOE VIX Index is another measure of volatility. It uses S&P 500 option prices to estimate the market’s expectation of volatility. It’s average closing price for 2017 was lower than any other calendar year since the index’s creation by the CBOE in 1986. To sum up, 2017 was a historical aberration. The combination of high returns and extremely low risk was an anomaly. There have been years where the S&P 500 experienced greater annual returns, but those returns were accompanied with higher volatility and downside risk. By any measure, 2017 was an exceptional year for stocks domestically and abroad. We don’t think investors should expect that combination to repeat in 2018.

Ever since the global financial crisis, global central banks have been trying to increase price inflation. They have been mostly unsuccessful other than contributing to rising asset prices. Now, there are hints that inflation is about to accelerate from below two percent to above the Federal Reserve’s target of two percent. This may be another head fake, and inflation may remain muted, but the trend bears watching. Even the retail sector is seeing pricing power improve, aided by the record retail bankruptcies removing capacity. Moreover, the labor market has tightened during the last few years, and many states are hiking their minimum wages in 2018. Hopefully the anemic productivity improvements of the past couple decades will improve so that price growth remains modest. If not, late 2018 may see inflation increase. Higher inflation almost always leads to monetary tightness, and eventually recessions. Inflation levels do not yet concern us, but the trend in price levels is something we will be focused on in the coming quarters.

NPP does not expect 2018 returns to match 2017 returns, nor do we expect volatility to remain so low. NPP remains positive on the market and the economy. We expect economic growth to remain solid in the United States and abroad. As such, we are yet not overly concerned about the market even though the trailing returns are exceptional, and valuations are full. We expect 2018 returns to be positive, but lower than 2017. We also expect volatility to increase as interest rates normalize and the economy continues to grow. If a large pullback is to occur, we suspect it will be in the second half of the year when earnings comparisons become more difficult, interest rates are higher, and central bank liquidity diminishes.