Equities continued their now 14-month long move higher with the S&P 500 rising 5.53% in the first quarter. Large capitalization stocks led the way, outperforming their small and mid-capitalization brethren. International stock markets outshone even the best of the US domestic indices. The MSCI Emerging Markets Index rose 11.15% during the quarter, while the MSCI EAFE Index climbed 6.47%. These markets had the wind at their back thanks to broadly positive economic data from overseas coupled with the pullback in the dollar. The S&P 500 was led by the information technology, consumer discretionary and healthcare sectors. The only two sectors that fell during the quarter were the energy and telecom services sectors, while financial services moved higher but underperformed. There was a clear unwind of 2016 S&P 500 sector trends as four of the five worst performing sectors turned into the best performers in the first quarter. The opposite was true for the three best performing sectors of 2016.
In other financial markets, bond yields moved slightly lower in the first quarter after rising through mid-March. Most of this decline occurred in the last two weeks of March following the FOMC meeting. The Bloomberg Barclays Aggregate Bond Index rose 0.82%, while Bloomberg Barclays U.S. Government/Credit Index rose 0.78%. Bond yields rose rapidly off of their 2016 lows, and a consolidation in yields is not surprising. This is especially true after seeing intermediate Treasury yields move up more than one percent in less than a year. Meanwhile, commodity prices were mixed. The CRB BLS commodity index rose 1.87% in the quarter while oil and natural gas prices fell. Gold prices rose 8.43% and the dollar weakened 1.82%. 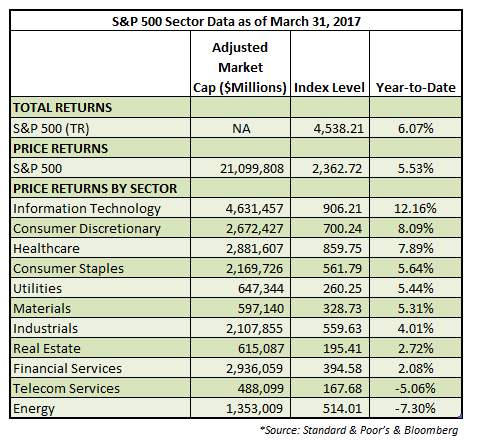 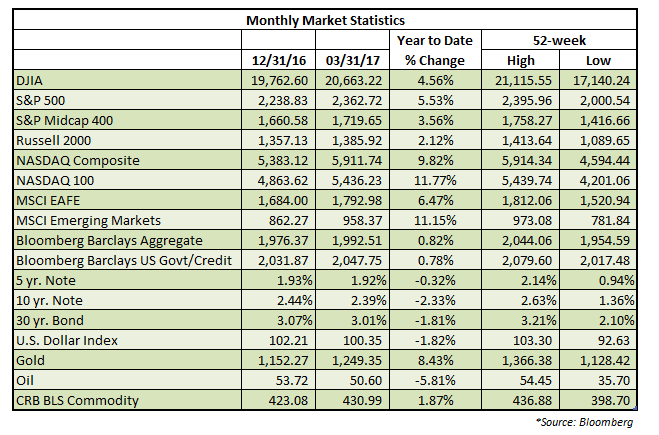 Global Economic Pickup
Global growth began to accelerate in the second half of 2016 both here and abroad. In the United States, the ISM manufacturing PMI bottomed at the end of 2015, while the global PMI bottomed in February of 2016. The increase in manufacturing activity accelerated during the fourth quarter of 2016 and continued during the first quarter of 2017. This has occurred despite Brexit, a contentious U.S election, and the expectation of several high-spirited European elections pitting populists against those in favor of the status quo. Domestically, industrial production and capital goods orders are moving higher again for the first time in about two years. This is partially due to the ramp up in energy production as energy prices recover from their 2014-15 collapse.
The media focus in 2016 was on the economic risks imposed by the U.S elections and Brexit. However, it could be argued that the most important global economic story of 2016 was Chinese growth inflecting higher after peaking in 2010. Chinese growth appears to have regained strength after moderating for about six years. Data from China is spotty at best, but independent data and surveys point to a pick up in Chinese growth. NPP does not think it a coincidence that this occurred about the same time as the increase in global indicators. As you can see in the chart below, the Citigroup Global Economic Surprise Index started inflecting higher in the fourth quarter of 2016 and remains very strong at the end of the first quarter. NPP does not think it was a fluke that the rapid increase in the Citigroup Global Economic Surprise Index (see chart) coincided with the stock market rally. The removal of uncertainty following election of President Trump was undoubtedly the spark for the market rally, but NPP believes it persisted due to the consistent improvement in worldwide economic data. 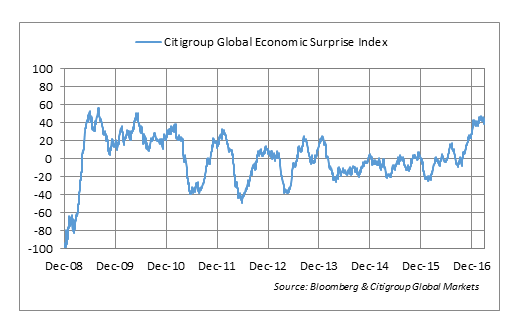 The increase in economic growth allowed the Federal Reserve to raise the Federal Funds rate a quarter of a percent in the first quarter with an eye on future rates hikes this year and next. Higher inflation and modestly improved domestic growth led to the rate hike. Moreover, as we get further from the economic crisis, the case for emergency rates weakens. The recent tick-up in growth may be another false start. Even if the pick-up in growth is another false-start, an environment of consistent, if choppy two percent real GDP growth does not merit interest rates near zero. Normalization of interest rates does not equate to restrictive lending conditions when short-term interest rates remain below the inflation rate. The growth rate in banks loans has moderated, but it is still positive and consistent with economic growth. Additionally, foreign economies appear to be doing better and are no longer a major drag on global growth.

Global Economic Risks
This has been a long expansion when measured in years, but when measured in magnitude, it has been very weak. The United States has not experienced a booming expansion. There are pockets of excesses, but very few areas of the economy that are obvious bubble candidates. Sub-prime auto lending and student lending are two candidates, but NPP does not believe the increased delinquency rates are presently big enough to tip the economy into recession. Housing prices may be a bit too high, but this time, the potential overvaluation is partially due to too little supply and coincides with restrictive lending standards versus the incredibly lax lending standards that preceded the popping of the housing bubble in 2006. The homeownership rate is at historically low levels and just recently reached the low end of the range that persisted between 1985 and 1995 before the housing bubble started to form. 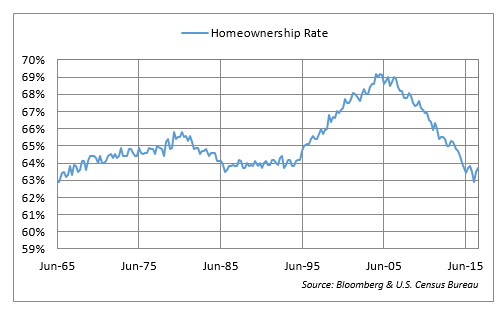 Many of the risks that could adversely affect the United States are geopolitical and emanate from abroad. NPP does not believe Brexit will result in a major shock to Europe and the global economy, but we cannot dismiss this risk completely. There are several major elections in Europe this year including in Germany and France. If one or all of these were to result in populists being elected, NPP would have to reexamine our investments and positioning. China has been a key driver of the recent increase in growth, but that growth has been accompanied by much higher debt. At some point in the future, China will need to get its debt under control, but NPP does not think they are close to that point. In our opinion, one of the biggest risks to our outlook would be a global trade war if protectionism started to spread around the globe. However, that does not appear to be likely in the short-term. The current changes being discussed to NAFTA are tweaks, not a radical reworking of the existing framework.

International Markets Starting to Look More Attractive
The S&P 500 consistently outperformed the MSCI Emerging Markets Index for the last seven years. This followed a sustained period of S&P 500 underperformance for a nine year period ending in 2010 against the same index. These long periods where the U.S. markets and emerging markets ("EM") are out of step have many underlying causes. The primary reason for the current period of S&P 500 outperformance is relatively straight forward. Growth in the US has been consistently positive over that period while several emerging markets experienced recessions. The obvious question is: are we nearing an end to the current S&P 500 reign? NPP believes that may be the case. Some of the factors that were holding back emerging markets are easing. Falling oil prices hurt the energy exporters, but energy prices appear to have seen their lows and are stabilizing near current levels. Many emerging markets were adversely affected by their currencies depreciating against the dollar leading to a flight of capital out of those countries. Now many EM currencies are strengthening against the dollar. For the first time in many years, we are seeing synchronized growth across most of these markets. In addition, there has been a change in the growth drivers over the years. The EM index used to be dominated by energy and materials. Now those two sectors combine to make up roughly 15% of the MSCI Emerging Markets Index compared to about 10% in the S&P 500. In addition, information technology now makes up more than 20% of the EM index, very close to the weighting in the S&P 500. More importantly, the EM equities appear cheaper than those that make up the S&P 500. There are more risks in emerging markets, but even taking this into account, valuations appear reasonable.
Of course there are risks to this outlook. The rally in EM currencies against the dollars may just be a countertrend rally in the context of an ongoing bull market in the dollar. It is unlikely emerging markets will outperform in dollar terms if the dollar were to resume appreciating rapidly against EM currencies. The outperformance in EM equities was partially driven by China and great demographics in much of the emerging world. However, the positive demographic trends in some countries have reversed and part of the emerging world now lags the United States in population growth rates. There is also the issue of lax property rights for investors in emerging market countries. Nevertheless, after a decade or so of lagging the S&P 500, we believe it is time to start adding emerging markets exposure.
The S&P 500 has had similar, long periods of outperformance and underperformance against foreign developed markets. However, NPP is less positive on the investment prospects for the developed world. While there is a case to be made for short to intermediate outperformance of foreign developed market equities against the S&P 500, we still feel the risks of secular stagnation endemic to Europe and Japan have not reversed. Until that happens, it would take deep undervaluation overseas or a major misstep in the United States for NPP to want to shift client assets to the developed world.

Positive on the Economy, Temporarily Cautious after Rally
NPP expects low, but positive returns for the remainder of the year. On top of the S&P 500’s 6.07% total return through the first quarter, 2017 is shaping up to be a solid year for equity returns. We would not be surprised to see the current pause continue for a little while longer, but do not think the current market consolidation will result in a pullback of more than five percent. Deeper corrections are associated with weaker economic growth than we believe will occur in the next twelve months. NPP still thinks this is an environment where corrections should be used as buying opportunities for favored equities. Additionally, for the first time in a while, NPP thinks that the prospects for equities in emerging markets are slightly better than the United States despite their higher risk characteristics.