The S&P 500 posted its seventh straight positive quarter with a 2.57% gain for the second quarter of 2017. The rally brought its year-to-date rise to 8.24%. Domestically, large capitalization growth stocks were the clear winners, while smaller companies and value stocks lagged. International markets broadly outperformed the S&P 500. The MSCI Emerging Markets Index increased 5.47%, while the MSCI EAFE index which includes non-U.S. developed markets rose 5.03%. Year-to-date, the MSCI Emerging Markets Index and the MSCI EAFE Indices rose 17.23% and 11.83%, respectively. A weak dollar, improving foreign economies, and ongoing global quantitative easing contributed to recent international outperformance. Here in the US, the second quarter rally was led by the healthcare, financial services, and information technology sectors. Most of the outperformance in financial stocks occurred late in the quarter when the Federals Reserve’s CCAR stress tests gave banks a relatively clean bill of health. This will allow many of those companies to return more capital to shareholders. Information technology stocks pulled back near the end of the quarter following a furious rally. Investors apparently used technology stocks as a source of funds to rotate into financial stocks. Energy and telecom services remained the two worst performing sectors in the S&P 500.

Treasury yields declined during the quarter, but crept higher near the end of the quarter after comments from Mario Draghi were interpreted by many investors to indicate that the European Central Bank’s easy monetary policy may be slowing in the not too distant future. The Bloomberg Barclays Aggregate returned 1.45% in the second quarter as yields dropped, and credit spreads tightened to near-record lows. 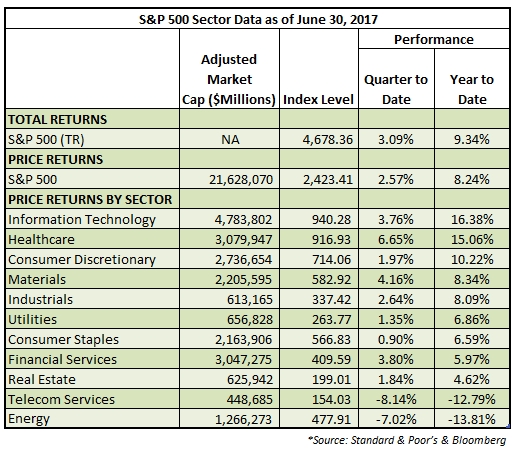 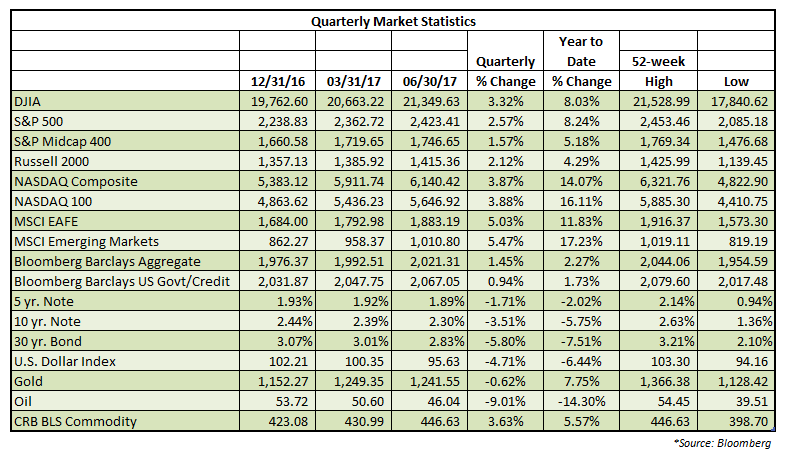 Over the last 5 years the US has experienced steady economic growth. One anomaly has been consistently lower than expected growth in the first quarter of each year. This year was no exception, with slow growth reported in the first quarter despite seeing reports of improving economic data as 2016 came to an end. The Bureau of Economic Analysis adjusted their calculations after the data exhibited a clear seasonal bias and the data set still shows a seasonal bias. NPP does not know what the reason is for this seasonal anomaly. However, we think the debate about the strength or weakness of the first quarter of 2017 misses the point. When people discuss GDP growth, they usually estimate GDP growth for the quarter, seasonally adjust it, and then annualize it. On this basis first quarter “real GDP” growth, which measures nominal growth less inflation was a weak 1.4% in the first quarter. NPP thinks that the problem is not the data, but the analytical framework used to measure it. Firstly, the data is estimated, especially the initial report, so the trend is more important than any one data point. Secondly, to come up with a real GDP figure, inflation must be calculated and the inflation rate is also an estimate. While inflation is important, NPP believes that as long as inflation is contained, nominal GDP is more important than real GDP. Finally, trying to seasonally adjust GDP in a nineteen trillion dollar economy strikes us as a fool’s errand. We think the most important number to look at is the year-over-year change in nominal GDP growth while monitoring inflation. You must remain cognizant that a natural disaster can distort the data, but this is always the case whether you are analyzing annual or quarterly data. On this basis, the first quarter's nominal GDP growth (see chart) seems satisfactory in the context of a low-growth world. 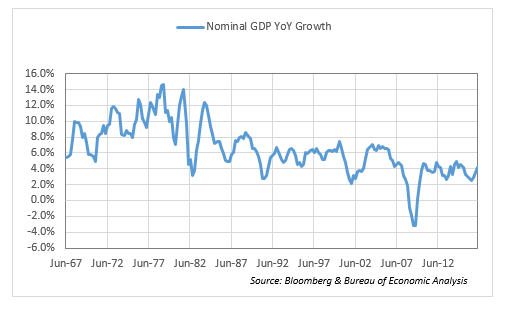 Additionally, the S&P 500’s earnings and revenue grew 14.71% and 7.76%, respectively, in the first quarter according to Bloomberg. While it’s true that a significant portion of earnings and revenues are generated overseas and oil prices stabilized during the first quarter on a year-over-year basis, the solid earnings reports were mirrored in the government data. At the end of the day, real GDP is still probably growing around two percent, while nominal GDP is still growing about four percent per annum. This should be a positive for U.S profits and contribute to rising interest rates in the second half of 2017.

Despite the slow-growing nature of the most recent economic expansion, the improvement in consumer spending has been persistent, but slower than prior expansions. Consumer debt ratios have improved even if this improvement has leveled off recently. The ratio of consumer debt to income is at levels first reached fifteen years ago (see chart). Moreover, the average cost of debt has fallen as interest rates declined leading to even lower monthly debt service costs. A lot of the improvement has been concentrated in higher-income Americans, but overall, consumer balance sheets have greatly improved from the depths of the 2009 recession. This is in contrast to the 2001 recession which saw Americans lever up to maintain their standard of living and profit from a percolating housing bubble. In other words, while this expansion may be long in the tooth, the backdrop for the consumer appears better than it was in 2007. 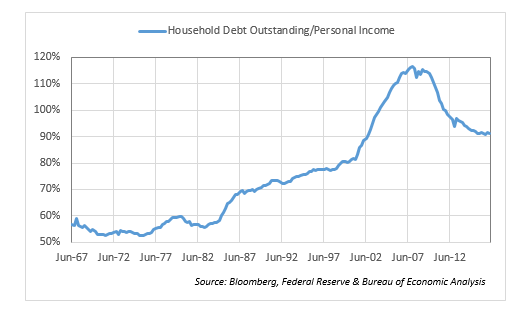 Wage growth has been weak during the past seven years. At least part of this is likely due to the significant amount of economic slack built up due to the severity of the prior recession. Lower-skilled workers are rejoining the workforce at lower than average wage rates. Additionally, baby boomers are retiring in masse and being replaced by younger workers. This is likely exerting downward pressure on hourly earnings growth rates. After several years of slow improvement, unemployment rates are low and hourly earnings growth appears to be inflecting higher. Several economic surveys indicate that many companies are unable to fill positions due to an inability to find qualified workers. An increase in hourly wages coupled with much improved balance sheets would increase the likelihood of acceleration in economic growth. NPP does not expect the economy to rapidly accelerate, but an improved consumer balance sheet increases the probability of this happening while reducing the likelihood of a slowdown in domestic growth.

A Little Cautious Going into the Third Quarter

The U.S equity rally has been very strong over the last year and a half with only a couple of corrections in the range of 5%. The short decline after the Brexit vote was the most memorable one. NPP would not be surprised if we get some type of pullback during the third quarter before rallying near the end of the year. The economy is still growing, but valuations are near the top end of the historical range and if interest rates rise during the second half of the year, those valuations will look even more stretched. As the second quarter drew to a close, we saw a rotation from the technology sector into financial stocks, and other beaten down areas of the market. This type of rotation between sectors rather than wholesale selling will likely continue for the remainder of the year, limiting the steepness of the expected decline. As for fixed income, NPP expect total returns will probably be minimal, if not negative in the second half of the year for bonds with an intermediate to long duration. Still, as rates rise, managers may be more likely to move some investments from equities into bonds. We are not expecting major losses in stocks or bonds. The economy continues to grow domestically, and improve globally. After a strong rally, we think it remains prudent to be a little bit cautious short-term.