The S&P 500 rose for the eighth consecutive quarter climbing 3.96%. The quarterly gains were once again led by the technology and healthcare sectors, while the financial services and industrials sectors also exhibited strong performance. The year-to-date equity market rally has been largely led by growth stocks. Recently, value stocks have been trying to reassert themselves which may be an indication that economic growth is going to accelerate. Defensive sectors lagged the markets as the consumer staples, real estate and utility sectors all underperformed. There was a clear differentiation in the performance of industries and stocks with improving sales and profits, and those that are facing pricing pressures. The strong equity market wasn’t isolated to the United States. The MSCI EAFE Index rose 4.26% during the quarter, while the MSCI Emerging Market Index rose 6.09% continuing their S&P 500 outperformance from the first half of 2017.

Treasury Yields trended lower starting in December 2016 before bouncing in September. The ten-year Treasury Yield rose to 2.34% after closing at 2.04% on September 7th. Stronger economic data domestically and abroad, a Federal Reserve that was more hawkish than expected, and the potential for tax reform and a budget deal sent yields higher at the end of the quarter.
Oil prices rose 12.05% in the quarter, but the CRB BLS Commodity Index declined 4.18% as the dollar weakened. Gold continued to rise and was up 3.04% for the quarter and 11.03% for the year. 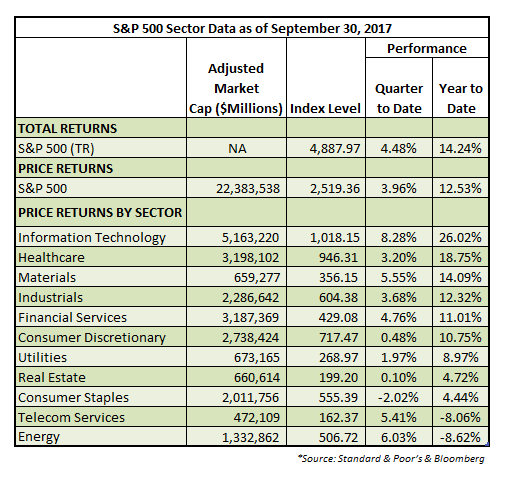 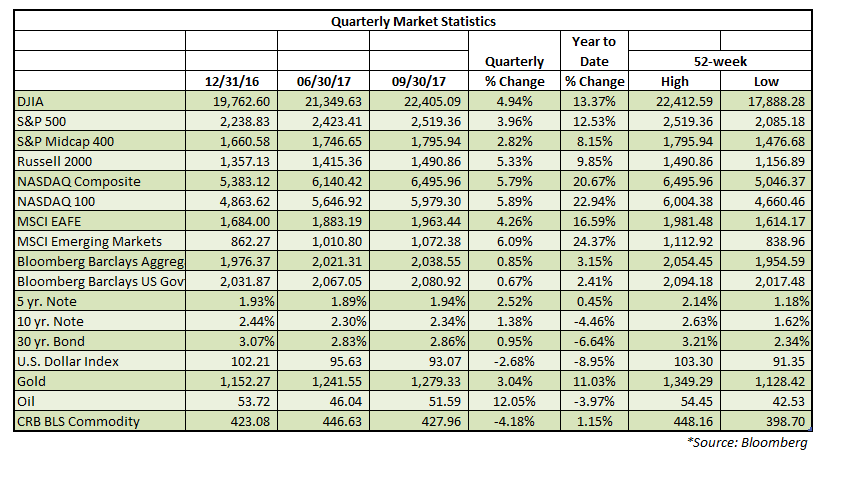 This economic recovery has been consistent, but slow. Part of the reason for the slow growth is that the manufacturing sector has been struggling domestically the last few years, while the services sector has been the driving factor contributing to economic growth. That may be changing. Some of the malaise in the manufacturing sector was due to declining energy and commodity prices. Energy prices are now back near the top of their range over the last two years following the crash in oil prices from their 2014 highs to their early 2016 lows. Technological advancements have made it more efficient and less costly to extract oil and gas from hard to reach places and that has made energy production profitable at lower prices. The firming of energy and commodity prices has also led to improvement in the economies of the emerging markets. Additionally, a weaker dollar has made industrial production more competitive in the United States. In a global marketplace, a weaker currency can help countries capture market share in the short-term. The extreme dollar strength from 2014 thru 2016 undoubtedly hampered U.S. manufacturers. This year’s decline in the dollar has been a boost and the manufacturing sector may be taking the lead from the services sector for the first time since the 2009-2011 period. Still, it is unlikely that the manufacturing sector will be the long-term driver of economic growth. Advanced economies become less dependent on manufacturing over time, and more efficient at producing goods. Nevertheless, it is positive to see capital goods shipments moving higher (see chart below), while other manufacturing indicators improve or stabilize. Manufacturing has dampened economic growth the last couple of years. If real GDP growth is to improve from the trend two percent level, all parts of the economy must contribute to the expansion. 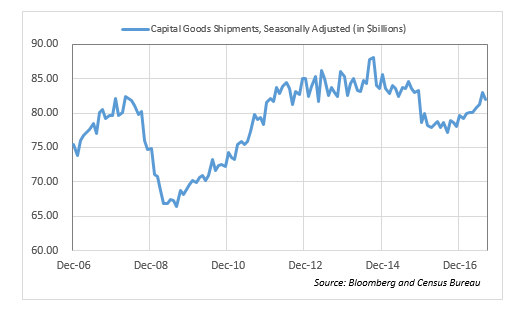 The United States economy’s real growth has remained around two percent since emerging from the great recession. This is sub-par historically, but better than most countries in the world since the crisis. Now, other countries are growing faster, while the United States continues to grow at approximately the same pace. In a normal world, interest rates would be expected to move higher as global growth improved. As investors know, this has not been the case. The Federal Reserve has raised interest rates four times since December 2015. The Federal Reserve’s balance sheet peaked at the end of 2014 and has remained stable ever since. It has declined as a percentage of GDP while staying at a high absolute level. The Fed plans to slowly shrink its balance sheet in the near future. Despite those plans, the combined balance sheets of the Federal Reserve, the European Central Bank, and the Bank of Japan are projected to grow. Expanding central bank balance sheets have contributed to a year-to-date decline in interest rates. Financial conditions overseas are at least partly to blame. Interest rates are negative overseas on a huge amount of government debt. The distortion is so bad in Europe that European high-yield debt rates are not very far from the yield on Treasury Securities. In other words, investors are not getting paid for taking on the extra risk. Seasonally weak growth in the first half of 2017, and disappointment on a lack of legislation being passed also contributed to declining Treasury yields. The rate on ten-year Treasury Notes fell from their March 13 closing high of 2.63% to 2.04% on September 7th before closing the quarter at 2.34%. On the other hand, Treasury securities less than five years have been moving higher as the Federal Reserve raised rates off of the zero bound. The yield on ten-year Treasury Securities have been range bound for the better part of six years now and a major reason for this is that global central banks remain extremely accommodative. 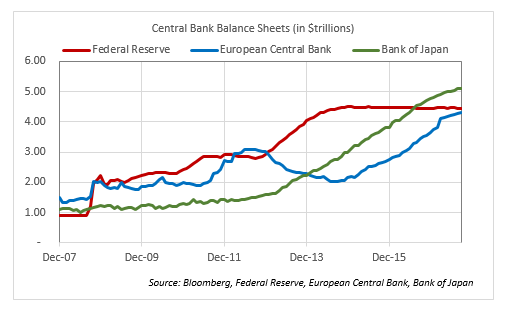 Expect Momentum to Continue in the Fourth Quarter

Equity market returns have been very strong the past couple of years. NPP remains cautious regarding valuation, but the global economy remains solid and we are entering a period of the year that is historically the best time to be invested. The S&P 500 and global equity markets are likely to continue to move higher unless there is a major confrontation in North Korea or elsewhere. If we are correct and the global economy improves, bond yields domestically and abroad are likely to grind higher despite easing overseas. A ceiling on yields probably remains as long as central bank balance sheets are collectively growing. Nonetheless, we expect yields to move higher in the last quarter of the year.