After a strong rally that began when Donald Trump was elected and culminated with a 7.45% rise in January, equity markets sold off in February and March. The S&P 500 declined 10.15% from its all-time closing high on January 26th before finishing the quarter with a three-month decline of 1.22%. The initial selloff was swift, and was followed by a failed rally which led to a retest of the February 8th low. The S&P 500 finished the quarter at 2640.87. The exact cause of the market turbulence is hard to pinpoint. It began with the release of the January Employment report that showed greater than expected wage growth.  This raised fears of rising inflation in the months ahead.  Other catalysts included higher interest rates, President Trump’s increasing protectionism and anti-trade rhetoric and the news that Facebook’s data was used by political consultants for data-mining purposes. Additionally, the markets were fully valued and overdue for some type of pullback especially in the context of rising bond yields. Information technology and consumer discretionary were the only two sectors that rose in the first quarter.  All the other sectors underperformed the S&P with the financial services sector not far behind while basic materials, energy, consumer staple, and telecom services sector significantly underperformed.
Meanwhile, Treasury yields increased across the curve, with short-term rates rising more than long-term rates and credit spreads widening. This led to losses for bond investors. The Bloomberg Barclays Aggregate and Intermediate US Government/Credit Indices fell 1.46% and 0.98%, respectively, during the quarter. Cash, which had been unloved until recently, produced a positive return and outperformed the S&P 500 and bonds. The Federal Reserve increased the Federal Funds rate another 0.25% making the returns on cash attractive in a world where financial markets have suddenly become much more volatile.
In other areas, emerging market equities outperformed the S&P 500 in the first quarter and finished up 1.07%, while developed markets underperformed the S&P 500 falling 2.20%. The dollar continued its decline in the first quarter, contributing to gold and oil's rise of 1.68% and 7.48%, respectively. Despite the rise in oil prices, the energy sector lagged the S&P 500 by more than five percent. 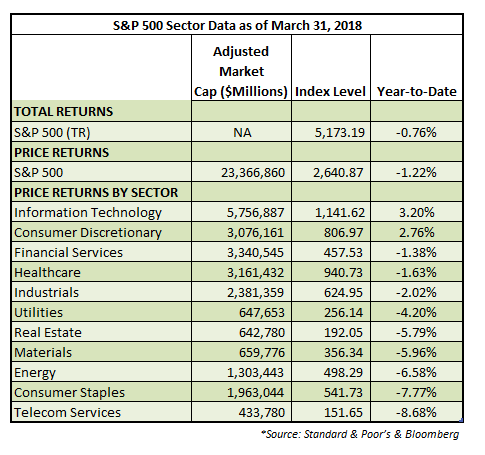 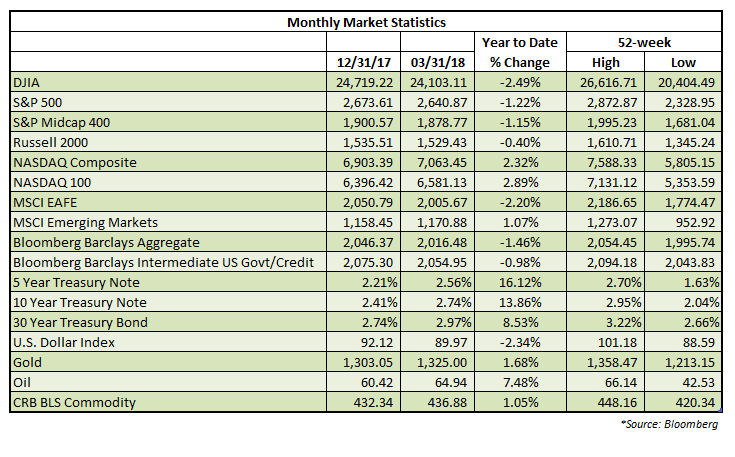 Valuations are Improved, Fixed Income Yields Rise
Before 2018 started, NPP felt that if the market was going to move higher, earnings were going to have to be robust. Quarterly reports have exceeded expectations, earnings have continued to grow, and profit margins remain strong. However, there are two components to market values (price-earnings ratios). One is earnings, but the other one is the multiple that investors are willing to place on those earnings. The PE ratio has been falling for a couple of reasons. Artificially low interest rates almost assuredly kept valuations higher as investors reached for yield and were willing to pay a higher earnings multiple for equities in a low-yield world. Additionally, low interest rates suppressed volatility. Investors are willing to stomach low expected returns if they believe that volatility will remain low and alternatives are nonexistent. Now that volatility has picked up and fixed-income yields have normalized, NPP doubts the market can reach the elevated PE ratios of the last few years. One simplistic way to look at the trade-off between equities and bonds is to compare the dividend yield on the S&P 500 to a ten-year Treasury Note or a basket of ten-year corporate bonds (see chart). 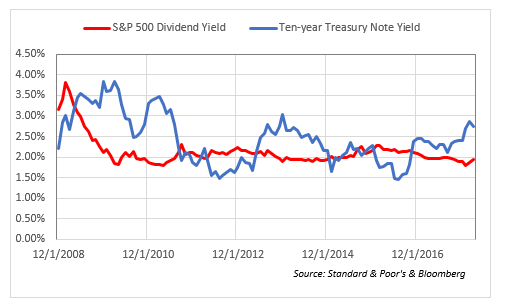 As the chart indicates, the excess yield of equities compared to bonds has been reversed and ten-year Treasury Notes now yield 0.79% more than the S&P 500. Moreover, the spreads on investment grade corporate bonds have widened since the end of 2017 and their yields are attractive when compared to dividend yields.
The equity market sell-off combined with growing earnings estimates has made the S&P 500 more attractive absolutely when compared to the end of 2017 and the January peak. However, valuations are rarely a good indicator of where the market will be tomorrow. After all, valuations have been elevated for a while and that didn’t stop buyers from adding exposure to the stock market.
Global Economic Trends
One of the reasons for the lack of volatility in global markets in 2017 was that the world was in the middle of a synchronized global expansion. Europe, which had lagged for about a decade, started to grow robustly while Japanese GDP and consumer confidence improved. Economic growth in developing economies had also been lagging for a while. By late 2016, world growth began to accelerate helped by a recovery in China, higher oil prices, better budget deficits in many countries and the delayed impact of massive quantitative easing. Now, Europe is starting to slow down, and there are early cracks in the case for acceleration in Japan. You throw in the possibility of a trade war and the case for synchronized global growth shrinks. In the first quarter of the year, economic data surprised to the downside in Europe and Japan. Meanwhile, U.S. economic reports have continued to surprise on the upside, while the data in emerging markets has been better than expected. 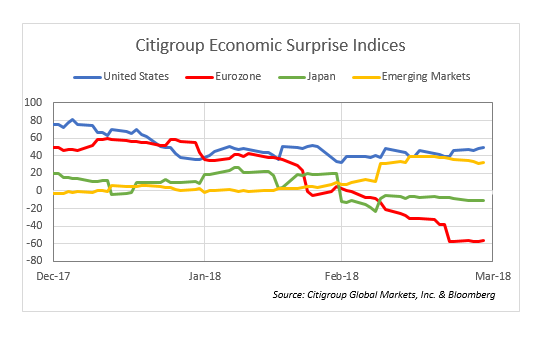 Nevertheless, part of the rationale for the strong global equity rally in 2017 and low volatility regime was synchronized global growth. The case for this appears very weak right now. NPP believes that U.S. and emerging market equities will do better than Japan and Europe despite the still loose monetary policy regimes in place in Japan and Europe.
Macro Uncertainty Returns to Global Markets
President Trump has announced targeted tariffs on steel and aluminum and has decided to go after China for what he deems the country’s unfair trade practices. NPP and others believe there are merits to these claims. President Obama’s U.S. Trade Representative, Michael Forman, told CNBC on March 24th that the issues President Trump raised are legitimate. Nevertheless, the proposals have contributed to economic and financial market uncertainty and President Trump’s brash negotiating style likely exacerbated the recent market selloff.  Tariffs are historically market-negative, and Trump’s practice of often taking extreme positions before compromising clearly unsettled the markets. Until there is more clarity concerning the range of outcomes, or confidence in a positive conclusion to trade negotiations, markets are likely to remain on edge.
Market Leaders Facing Headwinds
Other uncertainties that crept into markets during the quarter centered around some of the market leaders. Facebook is one of the ten biggest American companies when measured by market capitalization. It was disclosed in March of 2018 that Cambridge Analytica purchased personal information from Facebook and used it in a way inconsistent with Facebook policies. This caused Facebook’s stock to fall 9.15% the first two days after the announcement. As of March 31st, Facebook is down 13.66% from where it traded before the announcement.
Internet stocks and the technology sector in general have consistently been amongst the market leaders during this bull run beginning in 2009, and with good reason. Their earnings and revenue growth have been strong despite a slow-growing global economy. They possess very good balance sheets, and robust profit margins. Any type of loss in user confidence coupled with the possibility of regulation in the United States and abroad are bound to lead to lower valuations and possible slower growth. The technology sector represents a little under 25% of the market, while consumer discretionary companies Amazon and Netflix represent another 3% or so. If tech stocks falter, at least a couple of sectors will need to grab the baton for equity markets to move higher. For now, above-average growth rates, and mostly reasonable valuation should lend some support. However, if global regulators start to clamp down on the ability of tech companies to gather data and/or threaten to do something about market concentration, this could change the positive investment case for some of the internet and tech darlings.
Amazon’s stock declined 4.38% on the second to last day of the quarter after reports that President Trump would like Amazon’s tax collection policies to change to mirror retail companies with physical locations. It is not clear that the President has the political authority to affect change, but the reports triggered a pullback in one of the market’s best performing and largest stocks. Mr. Trump tweeted on the last trading day of the quarter his dislike that Amazon pays little taxes and takes advantage of the U.S. Postal System. The Internet and technology stocks have billions of dollars in cash, and dominant market share positions. Investors are starting to worry that global regulators may be aiming to reduce their market dominance.
Healthcare stocks also ran into trouble during the quarter. The decline in healthcare stocks was exacerbated by the announcement that Amazon, Berkshire Hathaway, and JP Morgan are creating a business to try to rein in healthcare costs. Details are fuzzy, but the news triggered a pullback in healthcare stocks. Additional talk of regulating healthcare costs in March didn’t help either. The U.S. economy would undoubtedly be helped by a better and cheaper healthcare system. Corporate competitiveness would improve and consumer financial positions would strengthen. Until this happens, any talk of price regulation that doesn’t fix the system is likely to be a market negative.
NPP Expects Volatility to Remain Elevated
The market is cheaper today than late January, but that does not mean investors will rush back in. NPP expects volatility will remain higher than it has in the recent past. Throw in higher interest rates as the year progresses and we suspect that PE ratios will move closer to fifteen than twenty. However, we think that the market is oversold in the short-term and do not see a recession occurring in the immediate future. We believe that economic growth will be somewhere in the two to three percent range in 2018 which is a slight improvement over the past sixteen years. Companies will start announcing first quarter earnings in a couple weeks, and they should be solid. The short-term pessimism seems overdone to us, and this increases the chances of an April rally. The market will almost assuredly be less calm in 2018 than it was last year, but this is partially a consequence of better growth.
New Potomac Partners has taken advantage of the rise in short-term rates and added short-term T-Bills to client portfolios to dampen volatility and generate a positive return. Cash outperformed S&P 500 and the Bloomberg Barclays Aggregate Index in the first quarter. While this may not happen for the entire year, cash and cash equivalents now offer a competitive return in addition to providing portfolio diversification. In addition, we expect intermediate and long-term rates to consolidate before moving higher in the second half of the year. There is a reasonable chance that the yield on the ten-year Treasury Note will hit three percent before year-end.
NPP believes equities may recover in April because we expect first quarter earnings to be strong and interest rates to be stable. We also expect global stock markets to stay in a broad trading range over the next quarter rather than resume a strong bull market. Fortunately, equity market volatility will likely provide good buying opportunities in companies with strong earnings growth and reasonable valuations.