2019 was a great year for equities. The S&P 500 ended up 31.49% on a total return basis, the best performance since 2013. It helped that the S&P 500 began the year deeply oversold after falling 13.97% in the fourth quarter of 2018. The strong 2019 showing not only recovered those losses but also brought the two-year S&P total annualized return to a little over twelve percent. The S&P 500 was led by the information technology and communication sectors as large capitalization stocks such as Apple, Microsoft and Facebook produced phenomenal returns. Financial services stocks also had a great year, thanks in large part to the Federal Reserve’s decision to lower rates. The remaining eight sectors failed to keep pace with the index for the year on a price basis. The energy and healthcare sectors posted the lowest returns, although healthcare’s performance improved in the fourth quarter and ended up being the second-best performing sector in the fourth quarter.hj

Global equity indices produced strong absolute returns but underperformed U.S. indices. Germany and France saw their stock indices rise 25.5% and 26.4%, respectively, in Euros. In England, the FTSE 100 Index rose 12.1% held back by the overhang from Brexit negotiations. The Shanghai Composite rose 22.3% even with the ongoing trade tensions, while in Japan the Nikkei rose 18.2% despite weak manufacturing data. The MSCI EAFE Index and MSCI Emerging Markets Index rose 18.4% and 15.4% respectively in 2019. In sum, 2019 was a great year for equity investors globally.

Bond yields declined across the board generating excellent risk-adjusted returns in the United States and globally. The Bloomberg Barclays Intermediate US Govt/Credit and the Bloomberg Barclays Aggregate rose 6.80 % and 8.72% for the year, respectively. Riskier bond categories such as high-yield credit and emerging market bonds produced double-digit returns.

Currencies and commodities were mixed in 2019. Gold increased 18.31%, a surprise given that the dollar was moderately strong most of the year. The dollar index ended the year up 0.22%, after being down 3.01% for the fourth quarter. Early year strength was replaced with end-of-year weakness as economies stabilized and trade tensions waned. The one negative for the year was non-precious metal commodities. The CRB BLS Commodity Index ended the year down 1.85%. The price of oil managed to increase 34.46% for the year, but this was only due to the collapse in oil prices in the fourth quarter of 2018. Oil prices never made it above their 2018 highs in 2019. 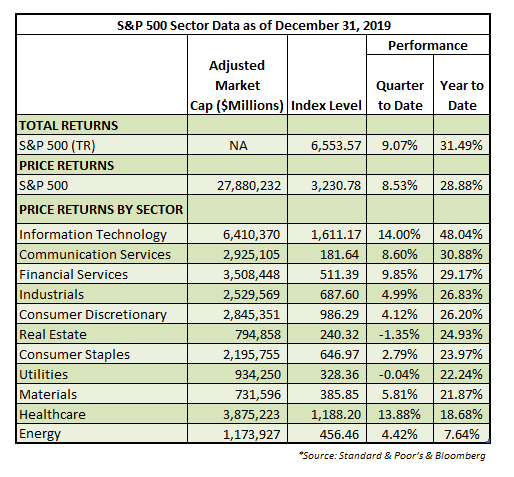 A large driver of the S&P 500’s stellar returns in 2019 was PE expansion rather than earnings growth.  In fact, the global economy slowed in 2019 prompting global central banks to cut short-term interest rates. Long-term rates fell in sympathy. The lower global yields coupled with an easier Federal Reserve led to higher equity multiples as investors focused on the expected pickup in growth. This was especially true by the fourth quarter when it became clear a US recession was not imminent. As expected, earnings per share growth was modest in 2019.

The S&P 500 began the year at below average valuations and ended 2019 with a PE ratio and other valuation metrics indicating above average valuations. However, during periods of low interest rates, low inflation, and modest growth, valuations tend to be high. The market is probably overbought in the short-term, but unless inflation rears its ugly head precipitating higher interest rates, a near-term pullback would likely be another in a long line of buying opportunities. A recession would also assuredly end this bull market, but the probability of one seems lower now as the weakness in global manufacturing looks to have ended (see chart). 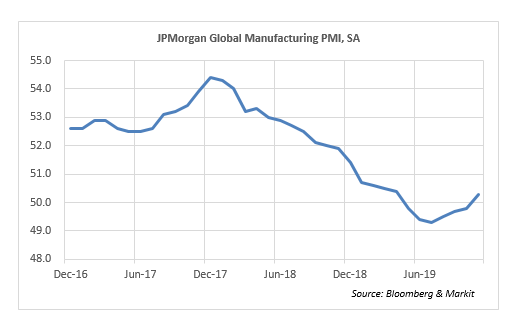 Several global indicators that were suggesting a rising recession risk earlier in 2019 reversed in the fourth quarter. Importantly, the U.S. yield curve steepened and is no longer inverted. Long-term rates rose indicating a higher likelihood of growth in 2020. The Swedish Central Bank raised short-term rates to zero from -0.25%. NPP believes that negative rates have hurt, not helped the global economy. As such, it will be interesting to see if raising rates to zero in Sweden helps or hurts their economy in comparison to their European neighbors. With rates gently rising globally, the amount of negative-yielding debt shrank to $11.3 trillion from an all-time high of $17.0 trillion on August 29th. That is still a lot of debt where investors are guaranteed of losing money, but at least it is moving in the right direction.

Manufacturing indices stabilized and turned up globally. They are still indicating contractions in several key global economies, but even in those places the rate of decline has lessened as excess inventory gets wrung out of the system. In the U.S., homebuilding construction and permits rose after going sideways for a while. Domestically, the pickup in home construction and the slight improvement in manufacturing bodes well for the economy in 2020. There hasn’t been a letup in consumer spending which is seventy percent of the economy. This suggests another year of real GDP growth at or above two percent.

Trade tensions and higher short-term interest rates were big contributors to the economic slowdown in 2019 and that led to long-term interest rates declining globally and in the United States. The Federal Funds Rate was lowered three times for a total of 0.75% as the Federal Reserve tried to counteract a manufacturing economy in recession and slowing domestic data. The yield curve temporarily inverted in the middle of 2019 before uninverting and steepening near the end of the year.  Several factors contributed to the steepening yield curve. The Federal Reserve and other global central banks cut short-term rates, while long-term rates stabilized and then started rising as global data and expectations improved. The easing in United States-China trade tensions and hope for a stage one deal also helped reduce part of the fear premium that had been built into government bonds. Long-term rates domestically and globally rose in the back-end of the year as a result, but still finished the year well below 2018 year-end levels.

The decline in rates along with expectations of an improving economy was an especially good environment for riskier bonds. Global liquidity, positive economic growth, and a global scarcity of safe alternatives meant that credit returns generally outpaced the return from government bonds. Investors searching for yields and buoyed by still decent economic data bought higher-risk debt after spreads widened in the last quarter of 2018.

NPP does not expect 2020 to be as good as 2019 for bond investors. Bond investors should expect to earn no more than the coupon in 2020 unless the economy moves into recession. If that were to occur, the only place to hide would likely be in government debt and short, high-quality corporate bonds.

Will Emerging Markets Lead in 2020?

The decades of the 2000s saw emerging market equity indices dramatically outperform the S&P 500 after the tech bubble burst. The S&P 500 regained its leadership position in the decade just ended. 2019 was not an exception as the S&P 500 rose 28.88% while the MSCI Emerging Markets Index increased by 15.43% for the year. We do not expect sustained outperformance yet from emerging markets. Market leadership is usually maintained until bull markets end. As such, the S&P 500 and technology companies should continue to lead. However, emerging market valuations are attractive on a relative basis and there are several factors that may allow emerging market indices to shine relatively and absolutely in 2020. 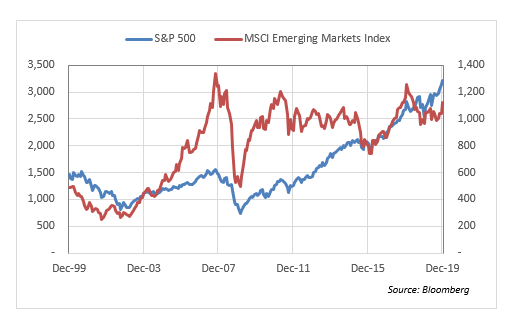 While the trade war has contributed to slower growth in the United States, it has harmed manufacturing economies and companies. Emerging markets have much larger manufacturing sectors as a percentage of their economy. A stabilization and resumption in manufacturing activity should benefit them even more than the United States which is a services-based economy. The stage one deal with China is likely the first step in this direction. NPP expects that two global technology/internet sectors will emerge: a U.S. based system and a China focused one. This should lead to more investment in the intermediate-term. Moreover, additional certainty over the economic rules and terms of trade going forward should be beneficial for the global economy, and especially so for emerging market economies.

The bull market is still intact and is likely to remain so until the next recession which we don’t expect in 2020. As such, the United States and the S&P 500 are likely to remain leaders in this secular bull market and moderate domestic/global expansion. After a year in which the S&P generated a total return slightly above thirty percent, a pullback and/or pause is warranted and should be expected early in the year. If this pullback occurs, it will represent another in a long-line of buying opportunities. We think it reasonable to expect positive returns in 2020, but do not expect returns to be as good as 2019. Returns closer to ten percent would be reasonable for equity investors. NPP believes there is a good chance that emerging market equities outperform the S&P 500 in 2020. Even if they don’t, the sustained relative underperformance has led to a good buying point for patient investors.

2019 was a great year for bond investors. We doubt history will repeat itself in 2020. Global growth expectations are beginning to improve, rates are low and possibly unsustainably low overseas where rates are negative. Long rates should grind higher while short-rates remain anchored unless inflation reappears. Bond investors can hope to earn their coupon, but a replay of the equity-like returns generated in 2019 should not be expected. Speaking of inflation, we see it is as the biggest risk for the economy and the markets, but we don’t see it appearing in any meaningful way in 2020. The economy should continue to grow and remain a tailwind for investors.