Equity performance in the first quarter of 2019 turned out to be the mirror image of the steep decline in last year’s fourth quarter.  The S&P 500 ended up 13.07%, a bit less than the Russell 2000 smallcap and S&P Midcap 400 indices which returned 14.18% and 14.02%, respectively. The Nasdaq 100, heavily weighted with large cap growth stocks, soared 16.57%.  Foreign developed and emerging markets lagged the S&P 500, but still generated returns greater than nine percent for the quarter. U.S. markets were led by the information technology sector, although the rally was broad-based. Seven of the eleven sectors reached double digit returns while the Utilities, Materials, Financial Services and Healthcare sectors saw mid to high single digit returns. The first quarter snapback was strong and persistent following the rapid fourth quarter decline. 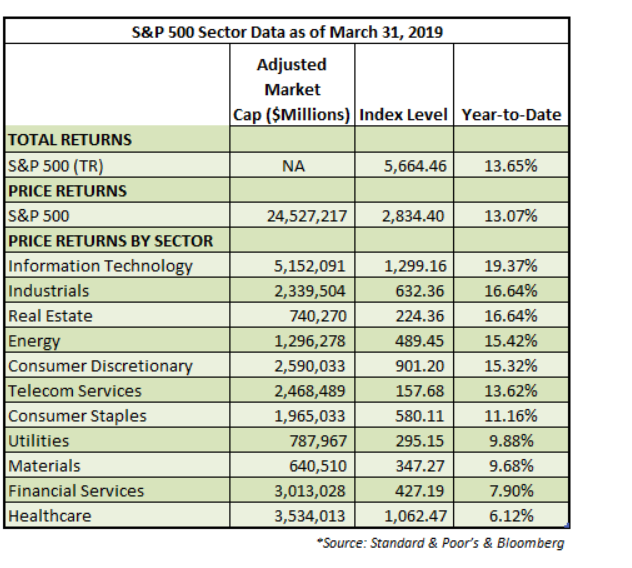 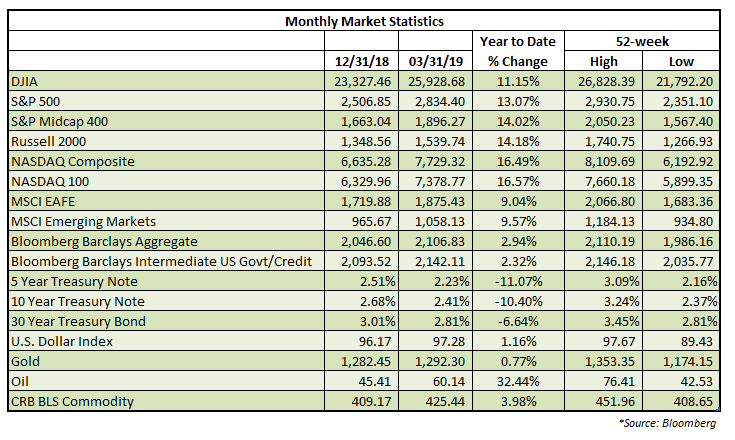 Fears of a recession have started to build globally, and we believe the concerns are well founded. China continues to report GDP growth above six percent, but many analysts believe the actual number may be closer to zero than six percent. The Japanese PMI of manufacturing activity is now below fifty indicating contraction and corporate confidence there has declined. Parts of Europe including Germany are probably in recession right now judging by the recent economic reports from that region.  At best, overseas economic growth is currently anemic and shows few signs of material improvement. Regardless of what the real number is, global growth has decelerated materially over the last six months.

In the United States, the economy is still growing, but there are warning signs. The PMI index has declined but is still above fifty. Housing starts, and automobiles have been trendless. GDP growth is likely to be below two percent in the first quarter after being above three percent in the third quarter of 2018. Fortunately, we think there are some temporary factors that are making the U.S. economy look weaker than it really is. The government shutdown hurt first quarter economic activity and produced a one-time negative hit to GDP. The weather was colder than normal in the first quarter and this likely impeded GDP growth slightly. Finally, in recent times first quarter GDP growth has consistently come in lower than the other three quarters despite seasonal adjustments.

NPP believes another factor for the first quarter economic weakness is a reversal of last year’s mini-excesses.The U.S. economy was running at a strong but unsustainable pace during the middle of 2018. Since the start of the recovery in 2009, there have been several growth scares. In our view, these brief slowdowns have prevented major economic excesses from building. NPP thinks this is happening again and we expect growth to pick up in the second half of the year and approximate two percent.

Despite short term jitters, consumers are arguably in the best shape they have been in almost two decades. Average hourly earnings are growing at close to a ten-year high. Lower earners are seeing real income growth for the first time in a while, consistent with the latter half of economic expansions. Consumer net worth to GDP is close to an all-time high, while consumer debt to GDP ratios are now back to 2002 levels (see chart). 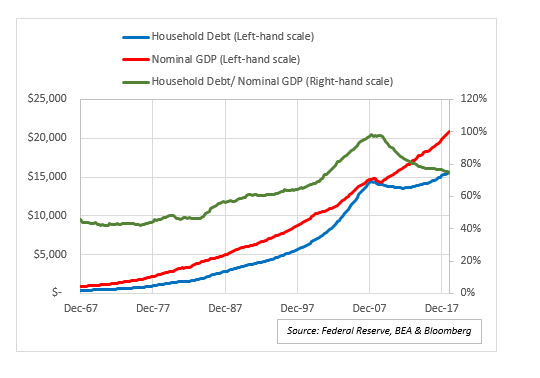 Our biggest concern is that the downward trend in consumer confidence starts to affect the real economy. If consumers pull back because they are worried about the future, it is conceivable that they could drag the economy into a mild recession despite their strong wage gains and manageable debt loads. After all,  consumer spending accounts for roughly two-thirds of economic activity.

In short there are both positives and negative factors tugging at the U.S. economy. NPP thinks that after a couple quarters of extrapolating strong growth into the future, investors and analysts have now done the reverse. The current bout of weakness will probably pass later in the year and the current economic pause is likely to mirror the others experienced over the past decade. NPP does not think major excesses exist, and in all likelihood, the slow growth experienced during this expansion will lead to a much longer than usual lifespan for this recovery.

First quarter equity returns were the best in nearly ten years and the fixed income space was a driving force behind much of that price movement. Interest rates fell, while credit spreads compressed leading to strong returns for fixed-income investors and making equity markets more attractively valued. The one downside was that longer-term Treasury rates fell more than shorter-term rates leading to a partial inversion in the yield curve. A fully inverted yield curve usually is followed by a recession within two years. However, there are reasons why the domestic yield curve may not be sending off the signals that it has in the past. There are currently over ten trillion dollars of global bonds with a negative yield worldwide. In other words, the borrowers are being paid by investors for the privilege of borrowing. This has undoubtedly distorted markets and has likely somewhat reduced the yield curve’s importance as an economic indicator.

As we look elsewhere at leading indicators, the future looks brighter. The spreads on corporate debt have tightened over the last three months and are now in line with their five-year averages (see chart). If a sharp slowdown was around the corner, these measures would be widening as economic and corporate stress become reflected in corporate credit spreads. That hasn’t happened yet, but bears watching. Wages are still strong and initial unemployment claims remain in a downtrend, suggesting employment growth is still on track. In our view, we are more likely to experience a profits recession, where company earnings decline while the economy grows. The strong dollar and margin pressures are hurting the top and bottom line of U.S. multi-nationals more so than being an overall economic drag. 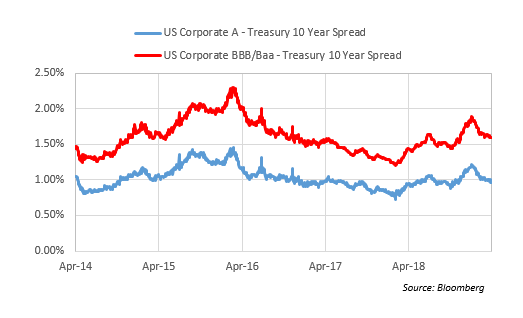 The bottom line is that the partially inverted yield curve is a concern to us, but not the immediate dire warning that many are pointing towards. If economic data and confidence indicators continue to fall in the second quarter, then we will worry more that the expansion is close to the end. Until then, NPP feels the U.S. will see slow but steady growth for the remainder of the year.

The equity markets climbed a wall of worry during the first quarter as economic and earnings growth worries were prevalent in investors’ forecasts. Our belief is that the equity markets are correctly predicting that a slow growth expansion will continue into 2020.  Nevertheless, the partial inversion gives us pause and valuations are approaching the top end of recent ranges. We are monitoring accounts so that our clients remain invested at or in some cases, below their target equity allocation as we have come a long way in a short period of time. We used recent strength to lower equity exposure. However, our caution is temporary for now. If another pullback occurs, we would likely use it as a buying opportunity. We think equities will rise modestly from here for the remainder of the year, but that the returns going forward will be nowhere near as brisk as the first quarter.