When 2019 ended, we thought the market was ripe for a single-digit pullback after a great 2019. Instead, the Covid-19 virus brought the global economy to a halt, first in China and then throughout the globe concentrated in the Northern Hemisphere. Global financial markets followed suit as the virus spread, quarantines ensued, and economies sank. The S&P 500 stock market experienced a crash reminiscent of 1987. 2020 was the worst first quarter for the S&P 500 Index since 1938. It ended the quarter down 20.00%, but that understates the peak-to-trough decline. The S&P 500 peaked at 3,386.15 on February 19th before falling 33.92% to 2237.40 on March 23rd. It then proceeded to rally 15.52% off its March 23rd close. For the most part, equities fell in unison, although the final damage was worse in certain areas than others. Information technology, utilities, consumer staples and healthcare held up the best as investors preferred less economically sensitive sectors and big technology stocks with strong balance sheets. The worst sector by far was energy which fell 51.06% as oil demand sank and Russia and Saudi Arabia sparked a global price war in energy. Oil prices declined 66.46% for the quarter, much more than the 7.81% decline in the broad CRB BLS Commodity Index. Overseas, broad-based international indices underperformed. The MSCI EAFE index declined 23.43% while the MSCI Emerging Markets Index fell 23.87%.

The only areas of the market that were safe for investors were Treasuries and gold. Gold rose 3.95% in the first quarter. Gold isn’t always a safe haven, but it generated strong returns and served as a portfolio stabilizer in volatile markets.  Treasury yields collapsed generating strong returns for investors. While the returns were strong, the liquidity evaporated mid-March leading to the intervention of the Federal Reserve which officially reintroduced quantitative easing. Higher risk and investment-grade bonds declined for the quarter as credit spreads widened due to investors reducing risk. The Bloomberg Barclays Aggregate and Intermediate US/Government Credit Indices ended up 3.15% & 2.40%, respectively, but they too were down before the Federal Reserve intervened. In summation, it was an extremely difficult market for investors. 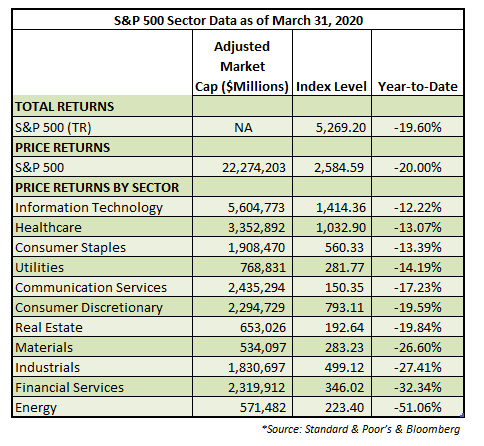 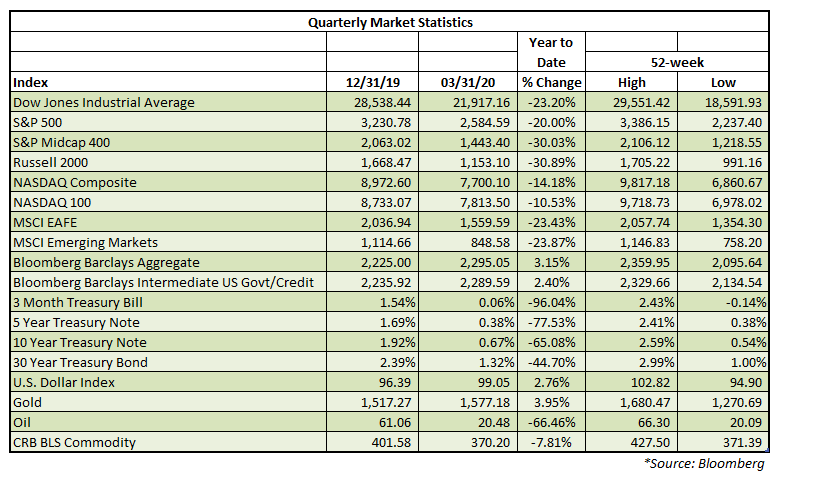 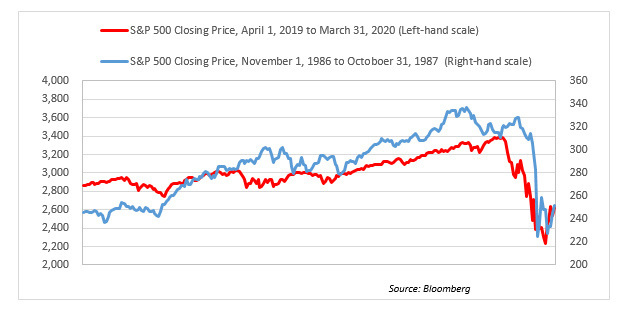 Bond Markets Freeze up in March Before Federal Reserve Intervention

While equities stole the headlines, the true concerns in financial markets occurred in the bond markets. Credit spreads blew out as economic recession/depression concerns grew. This was exacerbated by the decline in energy prices when both Russia and Saudi Arabia decided to defend their market share instead of price. Oil prices fell an astounding 66.46% in the first quarter to close at $20.48 after ending the year at $61.06 a barrel. It wasn’t just high-yield credit and emerging market credit spreads that widened, investment grade corporate credit spreads and municipal spreads rose too as the complacency of 2019 was replaced with COVID-19 related fears. Spreads reached the highest level since the Great Recession ended (see chart). 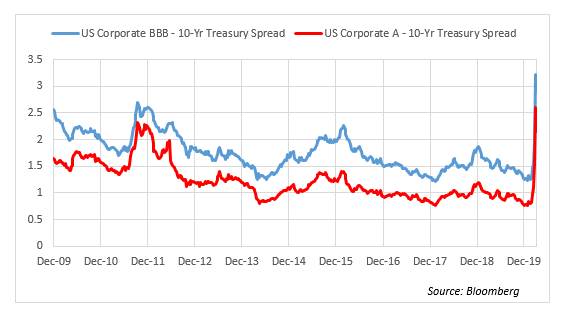 Safer fixed income assets classed experienced market dislocations as bids dried up. Municipal markets froze up and municipal bond prices dropped significantly before rallying at the end of the quarter. Even Treasuries were affected as panic and selling pressure caused bid/ask spreads to widen significantly in even the safest credit markets. This all changed when the Federal Reserve stepped in and officially announced a new quantitative easing program along with a host of actions to support fixed income markets. Its actions brought relief to most areas of the fixed income markets and buyers returned to the bond markets near the end of the month. Value in bonds has been reestablished across the bond universe. Assuming the lockdown does not go on indefinitely, today’s prices offer patient investors an extremely attractive entry point.

COVID-19 Brings World to a Standstill

The emergence of the coronavirus, COVID-19 from China and its subsequent spread has brought global systems to a standstill. Thousands of people have died, many more are hospitalized, and many global healthcare systems are stretched or beyond capacity. The United States recent quarantine measures were enacted in part to flatten the infection curve to ensure that the existing system can treat patients while waiting for patient support capacity and supplies to catch up. This country and most others were woefully underprepared for a virus as infectious as COVID-19 and at least initially reacted too passively. You can count the number of countries that reacted quickly enough to the challenge on one hand. That has changed as the magnitude of the crisis dawned on policymakers. Italy and Spain, two of the hardest hit countries are starting to see their new infection rate fall. Medical professionals have identified some promising treatments although it should be noted that it’s too early in the process to determine the efficacy of any treatment yet.  Nevertheless, there is hope that the United States can flatten the curve via social distancing until the required supplies show up. We are neither doctors nor epidemiologists and we caution that not even they can predict the future spread, eradication, or mitigation of the virus. NPP is hopeful that in May or June, the economy will re-emerge, and the underlying strength will reassert itself. The infection curves have tailed off in other countries that were ahead of us in shutting down their economies. Social distancing and self-quarantines should see the new cases begin to edge lower in a couple weeks.

There is hope social distancing, new treatments, and maybe temperature change will reduce the prevalence and severity of COVID-19 in the United States and the Northern Hemisphere. In the meantime, companies are racing to find a cure or treatment for people infected with COVID-19. If the United States can get the virus under control in time for new equipment to arrive, the number of deaths should fall significantly globally. We have seen in Italy that a lack of supplies and space has significantly increased the mortality rates. Speaking of mortality rates, it is not clear what that rate is due to a lack of adequate testing.  The US is now testing more than any other country but remains way behind the level of testing needed. More accurate information should help manage the spread of the virus while providing valuable information to help fight it. It is probably more deadly than the flu, but it might not be as lethal as feared. What is clear is that global healthcare systems were woefully unprepared. We hope that better prepared systems and quicker diagnoses can help bring the mortality rate down if the virus lingers once the quarantines/social distancing steps have ended.

The human toll has been harsh both physically and psychologically. Assuming we come out of this, what changes? We believe economic growth will be robust once we emerge from a brief, but severe recession. The United States financial system was in good shape preceding the crisis with high capital levels following the Great Recession. There will undoubtedly be some loan losses and bankruptcies despite the government’s attempt to mitigate them. It is unfortunate but the measures taken should avert a protracted recession or worse and lay the groundwork for a recovery. NPP does expect certain changes in the United States economy post-COVID. There has been a push to just-in-time inventory as technology has allowed for better inventory and capital management. Going forward it is likely many companies, especially those that are important for our national security, will ratchet back the push to squeeze out every ounce of efficiency from their global supply chains. We think that many industries such as healthcare and certain manufacturing companies will see the necessity of having a more resilient if less efficient manufacturing setup. This implies an uptick in manufacturing in the United States.

We would also expect that more employees will work from home, if only partially. It’s possible air travel for work will take longer to bounce back if teleconferencing emerges. Face-to-face meetings are still vital, and we suspect that any drop-off in air travel would be short-term, not long-term. Many individuals have been laid off and small business are suffering. It may be a small comfort that everyone is in this together and the government programs will clearly help. Unfortunately, some individuals and companies will surely be hurt and will reduce or delay hiring and investment to rebuild balance sheets. From a market perspective, many companies will have to eliminate buybacks at least temporarily to rebuild balance sheets. It often pays to bet on small companies and economically sensitive ones when emerging from a recession. This time, NPP believes companies with good balance sheets will lead the way.

We have more trepidation than usual trying to make a forecast about an unknown virus. The financial world is unpredictable enough as it is. This is going to lead to many deaths and hardships. The psychological damage will be significant and the financial costs huge. Yet the country will pull out of this. There are scores of companies working on vaccines and treatments, some of which appear promising preliminarily but still in need of extensive testing. Part of the problem in the United States and abroad has been a lack of medical equipment and accurate testing kits. This is in the process of being ameliorated and will help fight the virus’ spread and allow authorities to better manage it. We will emerge from this downturn, but the next few months will be difficult. NPP thinks this is a good long-term buying point for most asset classes, but we expect the short-term to remain volatile albeit much less so than what happened in March. However, anyone buying in here must be cognizant that risks remain high and it is entirely possible that there is another leg down for equities before the ultimate bottom is reached. Equities should rise over the next twelve months, while bonds spreads should moderate and lead to reasonable returns for bond investors. The mortality and infections numbers will continue to rise as the effect of social distancing works with a lag of a few weeks. An abatement of volatility may not occur until investors are convinced that the infection rate is on a well-defined downswing. There has been financial damage and therefore stock selection will be paramount. Nevertheless, patient investors that can tolerate the risks should be rewarded here.