Earnings Were Great, Now What?

Second quarter earnings reports have been impressive. With slightly more than ninety percent of companies reporting, S&P 500 sales grew 10.1% and earnings grew 25.6% in the quarter according to Bloomberg. Approximately seventy percent of companies in the S&P 500 reported better than expected top-line growth. The robust quarterly reports were not surprising given that second quarter nominal GDP rose 5.4% year-over-year, and the strength of the global economy. This contributed to the S&P 500 increasing 3.81% quarter-to-date through August 13th. In addition, there was little downside volatility for the S&P 500 despite a couple of notable sell-offs from companies such as Facebook and Netflix and numerous geopolitical issues.  Investors did not take these as signals to sell the entire market, but merely a reason to redeploy cash back into other stocks.

Trade tensions and retaliatory tariffs have been slowly building in 2018. For most of the year, investors expected the headline risk from trade tensions, especially with China, to ease. Investors and analysts were hopeful that the two biggest economies would come to some type of temporary agreement to avoid a trade war. For a variety of reasons, that hasn’t happened. A comprehensive trade deal with China involves an agreement on tariffs, technological theft, and other issues.  This will not happen overnight as negotiations with China must also incorporate resolving North Korea’s nuclear program.

The crash of the Turkish Lira and the decline of the Russian Ruble have raised concerns of rolling currency crises overseas.  There are several ways this can negatively impact the world economy.  European banks have exposure to the Turkish economy in the form of loans that may not be repaid in full.  Additionally, there are concerns that weakness in these currencies could lead to contagion across emerging markets.  While each country’s economy is small relative to world GDP, the combined impact of multiple currency problems would be large.

There are numerous other issues that could negatively impact equity markets. In England, the difficulty of fashioning an agreement on exiting the Eurozone remains. Closer to home, the Federal Reserve is reducing its balance sheet which is in essence withdrawing liquidity from the domestic economy.  The balance sheet has dropped from 25.3% in January 2015 to 20.9% as a percentage of GDP (see chart below) and this gradual decline is expected to continue. For now, this is somewhat offset by the extremely loose monetary policies implemented by the Central Banks in Japan and Europe despite their improved economies. At some point, those Global Central Banks are going to need to reduce their stimulus if not end it. It is not clear how much of an impact this will have on financial markets. 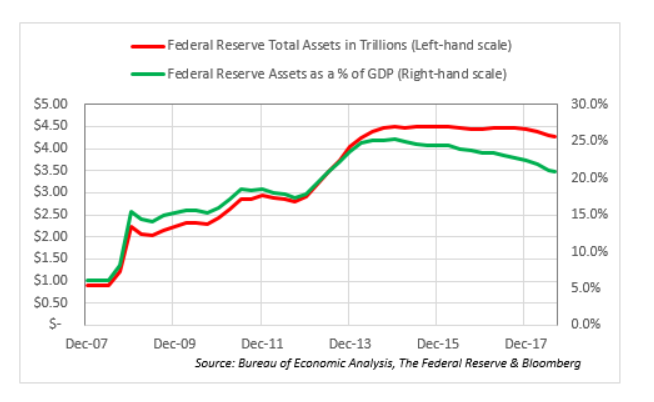 Markets often climb a wall of worry, and from a geopolitical perspective, there is plenty to worry about. The markets have brushed off these issues because earnings reports have been too strong to ignore. Now that the heart of earnings season is coming to an end, it is possible that the S&P 500 pauses or pulls back until October when strong quarterly earnings are expected again. We have been positioning for the potential volatility by rotating into stocks with strong balance sheets that have already sold off, and where we think the downside risk is limited. The important point is that we don’t expect the aforementioned concerns to lead to a sharp slowdown in economic growth. As such, we remain constructive on the S&P 500 into the end of 2018, even if the possibility of a market pull-back has risen.