The Federal Reserve (“Fed”) raised the Federal Funds rate 0.25% for the third time in the past six months. While the Federal Reserve is in a tightening cycle, it could be argued that financial conditions have not tightened that much. Interest rate rises have occurred at the same time inflation has moved up. Nevertheless, short-term rates have gone up, while the increase in longer-term rates has been muted. Additionally, The Fed indicated that it plans on beginning the process of normalizing its balance sheet during the second half of 2017. The bloated balance sheet is a result of buying government bonds and mortgages in the open market to help stem the financial crisis of 2008. This so called quantitative easing program ended in 2014. The balance sheet has risen from about nine hundred billion dollars before the crisis to almost four and a half trillion dollars now (see chart). It has been declining as a percent of GDP, but is still elevated compared to history. 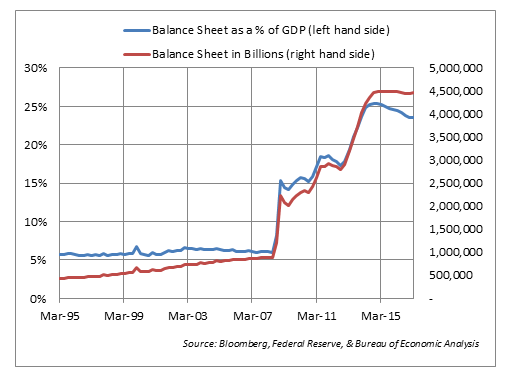 NPP hopes that the Fed will use the tick down in yields during the first half of 2017 to reduce its balance sheet. What has been done is in essence a grand economic experiment, and this seems like a good time to reverse the extraordinary measures taken during the crisis. We understand the Federal Reserve’s desire to ensure that its attempt to shrink the balance sheet does not roil global markets. NPP does not think it is surprising or unreasonable that the Fed would want to be cautious while reversing what has been done. Nevertheless, central banks in Europe, Japan, and China remain accommodative and we think it would be wise to shrink the Fed’s balance sheet while rates are low and other banks are utilizing easy money policies. NPP expects the global economy to continue growing. We think the Federal Reserve will have more leeway to utilize monetary policy in the future should they address the large balance sheet now.