Productivity, the Economy and Financial Markets

The economic recovery that followed the Great Recession has been one of the weakest on record. Growth in real GDP comes from two components: an increase in the working population combined with the change in productivity of those workers. Since 2009, the change in the working population has been constrained by a declining participation rate (see chart). At least part of this decline can be explained by the retiring baby boom generation. The rate peaked in March 2000, a period that coincided with the oldest baby boomers moving into their late fifties. The decline in productivity is harder to pin down, but it may be due at least partially to less skilled millennials replacing a large number of more skilled, retiring baby boomers. At any rate, in order to return to the higher average levels of economic growth than we have seen in the past, we need to see improvements in these two areas. 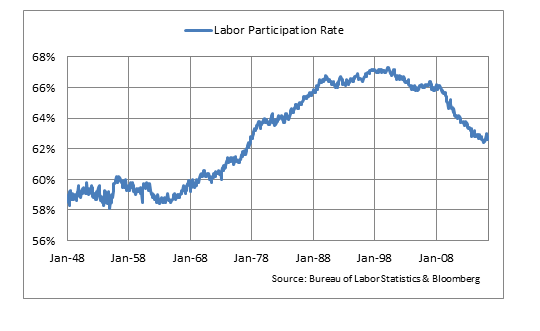 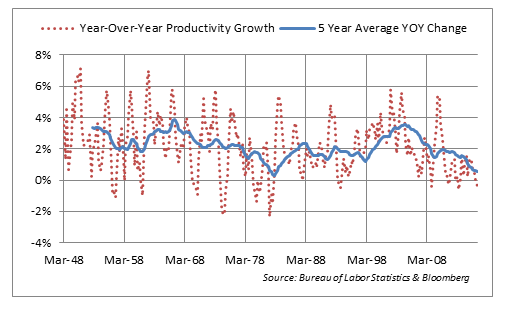 Faster productivity growth usually leads to higher wage growth, and importantly to investors, higher sales and/or profit margins. Weak productivity growth has contributed to slower economic growth, subpar income growth, and reduced profit margins. The question is why and is this about to change? If it is about to change, it could be that the recent rally is sniffing out faster growth and not more monetary stimulus.
One possibility is that the data is wrong. Eras such as the late-90s tech boom that are associated with rapid technological change frequently see upward revisions due to measurement problems years after the fact. A positive revision at some point in the future would mean that the economic growth is actually much better, and the data is not doing a good job of catching productivity gains resulting from new businesses resulting from the internet revolution. This is possible, but NPP does not think it's likely.
NPP is not sure what is causing lower productivity growth, but we do believe the data is relatively accurate and that slowing productivity growth is a real problem. Most companies have reported minimal top-line growth and weakening profit margins. If the data was somehow underreporting growth, it would most likely show up in higher wages or retail sales, and we aren’t seeing any acceleration in those areas.
There are a host of factors that are arguably contributing to weak productivity growth. In some cases it is not certain which factors are the cause, and which ones are the results of falling productivity. Capital expenditures have been weak for a while. Investment is one requirement for rising innovation. Is this due to weakened animal spirits following the Great Recession and stock market crash, or because there are a lack of profitable investment opportunities? Corporations cut millions of jobs during the Great Recession. It’s possible that there is no one left to fire.
The past couple of decades have seen rapid technological change with the advent of new technologies. It’s probable that each marginal worker being hired is less productive than the existing workforce as the less skilled workers rejoin the workforce. The unemployment rate is significantly higher for those that don’t have a college degree.
The industrial revolution saw a huge percentage of workers shift from agriculture to industry while increasing food production. The ensuing productivity gains were obvious. Over the past decades, the U.S. economy has shifted from a manufacturing economy to a service economy. The productivity gains that occur in the manufacturing sector might not be available to the entire service sector. Either that or we have made the wrong investments as the economy has transitioned.
The healthcare sector’s importance to the U.S. economy has grown as the population has aged. However, it is not clear that the healthcare sector is anymore efficient than it was twenty years ago. A doctor or dentist appointment still requires scheduling, talking to assistants, and finally a visit with the doctor and dentist. Specialists require referrals, insurance approval, and more paperwork. The paperwork and regulatory burdens continue to grow.
Perhaps, as baby boomers retire and are replaced by millennials, the workforce is temporarily becoming less efficient. Presumably a seventy year-old has greater built-in knowledge than a new college grad and will be more productive even if they are less computer savvy.
NPP is not certain what is causing declining productivity growth. We do believe the numbers are accurate, and that lagging productivity growth is a real problem. Higher productivity leads to higher capital expenditures, wage gains, growing sales, and better margins. A sustainable rise in the stock market in the long-run requires higher productivity. Until that occurs, we see the upside potential in the equity markets from current levels as being constrained.
The implications are different for fixed income markets domestically and overseas. Slower economic growth resulting from weak productivity growth makes it more likely that interest rates will stay lower for longer. Interest rates are probably being suppressed from extraordinary global monetary policy. NPP thinks that negative interest rates are harming the global economy and that policymakers are starting to sense this. There is a possibility that rates rise as this unwinds. However, absent a sustained rise in productivity growth, NPP thinks it’s likely that rates will stay lower for longer.
The United States economy has historically alternated through periods of high and low productivity growth. The United States is currently suffering through a low productivity growth period. The hope is that this low growth era is coming to an end and growth will accelerate. When that occurs, equity returns will likely increase. Until that happens, it is likely that equity returns will remain in the mid-single digit area while fixed income yields remain low.