The economy is still hurting, but nobody told that to the large companies in the S&P 500. Powered by better than expected earnings reports and mountains of liquidity, the S&P 500 reached an all-time high on September 2nd less than six months after losing a third of its value in 23 trading days. It finished the quarter up 8.47% and is now up 4.09% year-to-date but it was not a smooth rally. The S&P 500 experienced a peak-to-trough pullback of 9.60% in September based on daily closing prices. This is normal and to be expected after this mid-year rally. The market had become a little bit overheated, especially large capitalization tech stocks and the pullback was warranted and healthy.

Energy was the only sector down during the quarter and is now down 50.16% through September 30th. Large cap technology and internet stocks continued to lead the market, but certain cyclical sectors had good quarters as the economy recovered. The materials sector rose 12.73% in the quarter while the industrials sector climbed 11.99%.

While large-capitalization American stocks led global markets, smaller stocks and international indices appreciated as well last quarter. The S&P Midcap 400 finished the quarter up 4.38%, while the Russell 2000 was up 4.60%. Nevertheless, the indices were lower year-to-date. The MSCI Emerging Markets Index and the MSCI EAFE Index were up 8.73% and 4.20%, respectively, for the quarter but were also both down year-to-date.

Results were mixed in other financial markets. Treasury yields declined on the short to intermediate portion of the curve while stabilizing on the long end. The Bloomberg Three Month Treasury Index now sits at 0.09%, down another four basis points from June 30. Meanwhile the Bloomberg Ten-Year Treasury Note and Thirty-Year Treasury Bond Index closed at 0.68% and 1.46%, respectively, which is slightly higher than their June 30th yields. Various credit indices moved higher in the quarter as the fixed income space generated solid returns. The U.S. Dollar Index fell 3.60% in the quarter and is now down 2.60% year-to-date. Gold rose although it pulled back some from its third quarter high and closed up 5.89% for the quarter and 24.29% for the year. The CRB BLS Commodity Index rose 12.16% during the quarter and is now up slightly year-to-date. The notable exception was oil which rose 2.42% during the third quarter but remains down 34.13% year-to-date. 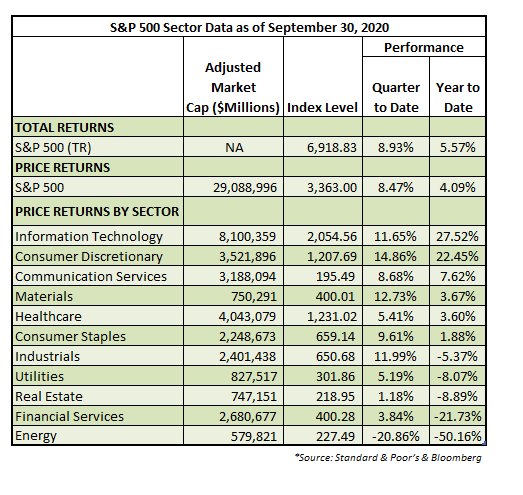 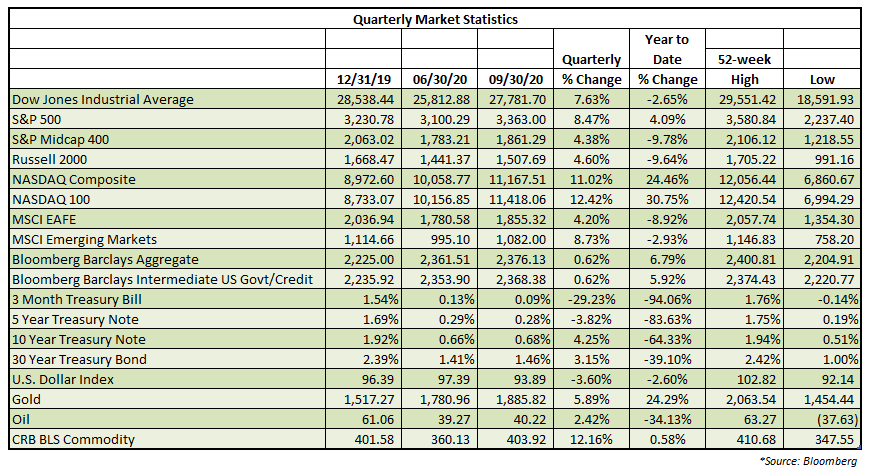 The second quarter earnings season for the S&P 500 is now complete. Amidst a global pandemic with economies severely restricted, the S&P 500 saw sales fall 9.39% while earnings shrank only 7.29% according to Bloomberg. It should be noted that these numbers include mergers and acquisitions which somewhat distort the year over year numbers. Nonetheless, it is extremely impressive that sales and earnings were able to hold up so well for some of the largest American companies. Additionally, a little more than half of the companies in the S&P 500 grew sales year-over-year. This stands in stark contrast to the Great Recession where earnings collapsed as banks and other companies took enormous write-offs due to falling asset prices and revenues. The difference is that in 2008 a lot of the impact was felt by big businesses. The 2020 COVID-19 recession, on the other hand, hurt many small businesses the hardest. There were exceptions. Leisure, hospitality and restaurants were hit extremely hard and there are large businesses in those industries. Unfortunately for the economy, small restaurants and businesses that were not considered essential or depended on day-to-day traffic flow were hit disproportionately. Meanwhile, the companies that helped businesses survive and thrive such as big tech companies did well. This has led to millions of unemployed while the S&P 500 sits near an all-time high.

The pattern of earnings beats has continued in the third quarter, although it is a small sample size. With sixteen companies reporting through September 30th for the third quarter, sales and earnings have grown 7.85% and 20.18%, respectively according to Bloomberg while sales and earnings surprised 6.28% and 25.78%, respectively. The economic expansion has started after an incredibly brief and severe recession and it is showing up in the early earnings reports.

COVID-19 will remain the major societal issue until there is either an effective vaccine or it fades away on its own. There are several promising vaccines which will hopefully be approved before the end of the year. Once a vaccine (or vaccines) gets approved, it will still have to be manufactured and distributed. We will climb out of this, but a normalized economy free of lockdowns is unlikely until the middle of 2021. Testing and treatment have improved since the winter and the intensive care units are not stressed. The death rate has fallen, but mortalities are still occurring at an annual rate of roughly two hundred and fifty to three hundred thousand in the United States. NPP worries that infections and deaths could rise in the winter months as people stay inside more. Europe appeared to have COVID under control and then the infections started to climb again.

There is a secondary toll due to the coronavirus, some of which is measurable, and some isn’t. The economic damage is calculable, but the long-term effects and other externalities are not. Millions of people are still unemployed due to the shutdowns and social distancing measures. This is necessary to reduce fatalities but has crushed many businesses. Thousands of small businesses have shut their doors unable to cover their bills. The damage to small businesses and employees will worsen while the shutdown continues. Bankruptcies are rising and the hope is that they do not cascade in the winter. More temporary furloughs are turning into job losses. There are numerous studies about how the ensuing lockdown is causing emotional stress. Some dual-income households are seeing one or both spouses take a step back to help the kids at school during the day. It will be difficult for the economy to reach its prior peak until schools have reopened. It seems unlikely that will happen during this school year for the entire country. Congress and the President are negotiating to try and ink another stimulus package which is undoubtedly needed even if the effectiveness and ability of the bill to target those most in need is questionable. This should provide support until the entire economy is able to reopen.

Americans will vote for the President on November 3rd. This election, like many political issues, has been very contentious, partisan and offers stark choices. The issue that frequently arises is how the election will affect the market. Based on historical data, the answer is unclear. The math does not show that either party is significantly better for the market. The market’s long-term trend is up, and even the percentage gains have not been materially affected by which party controls the presidency. There are a host of variables that would likely change, all else being equal depending on who wins the election such as tax policy, regulation, industry favoritism, etc. and it may be prudent to shift sector allocations if there is a Democratic sweep in November. However, it may be more constructive to think about what will not change. The Coronavirus is unlikely to be contained on November 4th or by January 20, 2021 which is the presidential inauguration date. Additionally, the budget deficits will still be immense, China trade policy will remain contentious, and unemployment will be high although hopefully lower than today. In other words, whoever is President in 2021-24 will have to deal with certain constraints including a divided country. Additionally, there are numerous congressional races that are contested, and it is unknown whether the party that controls the presidency will also control either or both houses of Congress.

NPP does not believe the result of the election will have a major long-term impact on financial markets. However, the election does matter and regardless of who wins there are certain to be issues to deal with. The United States is a divided country split evenly down the middle on a lot of key issues. There will be more mail-in ballots this year due to the Coronavirus that will have to be counted. It is very possible that we will not know the winner of the presidential election immediately. This may lead to short-term unrest and could cause civil unrest and upset financial markets in the short-term, but those issues will be resolved. The elections are admittedly more of a wildcard than normal and we will try and stay nimble and ready to react should investment opportunities present themselves.

S&P 500 earnings have been remarkably resilient given the economic challenges and we expect this trend to remain intact. The action should remain choppy, but we think the uptrend will continue. COVID-19 remains a risk, but we are hopeful that a medical solution will emerge in the fourth quarter and there are several vaccines scheduled to report stage three results later this year. November elections may cause volatility, but any pullback is likely to be temporary, not long lasting. The daily new cases have plateaued at an uncomfortably high level, but hopefully a vaccine will lead to the beginning of the end of the virus as a medical risk and in so doing unleash the economy. We do not want to diminish the loss of life that has occurred or unfortunately will occur. Markets frequently lead economies and equity markets are sensing an end to this crisis at some point in 2021.