Returns for the first half of 2019 were strong for most asset classes. The S&P 500 finished the quarter up 4.30% on a total return basis, while its year-to-date return was 18.54% which represents its best first-half performance in twenty-two years. The S&P 500 outperformed international indices during the quarter.  Many international markets fell victim to concerns over trade risks and slowing global growth. The MSCI EAFE Index finished the quarter up 2.50% and up 11.77% year-to-date, while the MSCI Emerging Markets Index fell 0.31% in the quarter but is up 9.24% year-to-date. Domestically, the financial services sector was the best performing sector in the quarter. The only sector to fall in the quarter was consumer staples. Year-to-date, consumer discretionary, information technology and industrials led the S&P 500 higher, but all sectors are up at least 7.12% through June on a price basis.

Bonds also generated attractive returns due to falling global interest rates and declining credit spreads. The Bloomberg Barclays Aggregate rose 3.08% for the quarter and 6.11% for the year but lagged emerging-market bonds and high-yield bonds year-to-date. Treasury rates fell along the curve as investors began to price in slowing global growth and rate cuts later in 2019. The dollar fell slightly during the quarter and was practically unchanged year-to-date. Despite the slight weakness in the dollar, oil and other commodities edged lower as investors started to worry about a global slowdown. Gold on the other hand rose 9.07% for the quarter and is up 9.90% year-to-date. This was likely related to the growing number of bonds trading with negative yields and investors’ desire for a stable store of value. 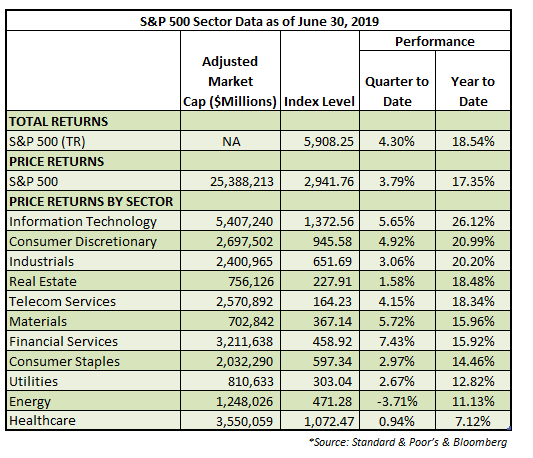 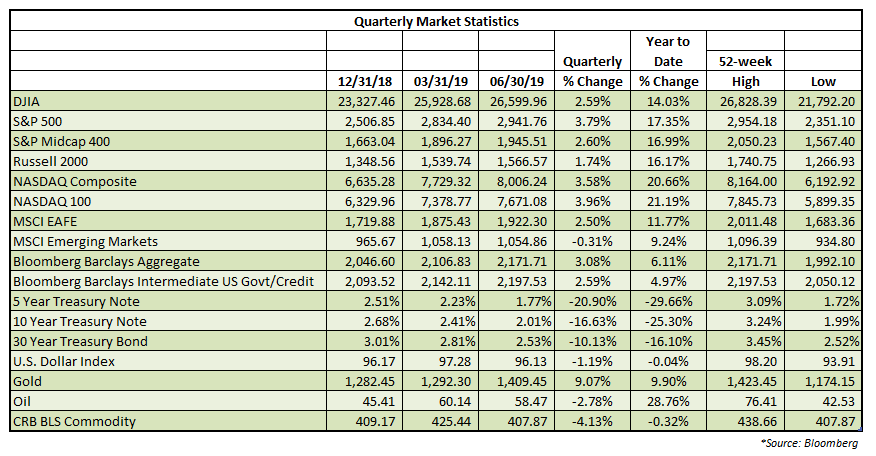 Economic data is slowing globally but has been holding up better in the United States. The U.S. is primarily a consumer-driven economy with the consumer accounting for about two-thirds of the economy and with near full employment, low interest rates and rising wages, the US consumer is in relatively good shape. Domestic manufacturing is slowing but it makes up a much smaller albeit important portion of US economic activity. Overseas, there are many economies that are export driven and are suffering as global trade slows amid a drop in economic activity and tariff increase. China, Japan, Germany and many emerging markets more dependent on exporting manufactured goods have been lagging.

U.S. consumers were scarred by the Great Recession and have spent the past decade plus improving their balance sheets. Consumer debt as a percentage of income has declined dramatically. 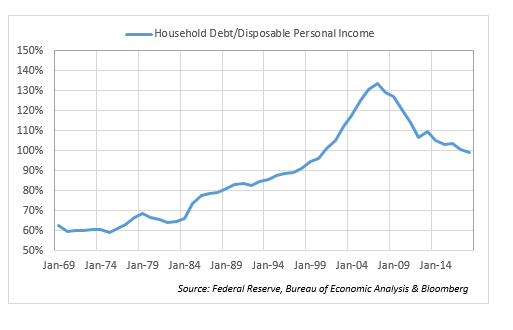 Additionally, declining interest rates have further reduced debt burdens. Until recently, consumer spending and confidence have remained strong. Incomes have been growing nicely, especially on the low-end where consumers usually spend almost every marginal dollar. Consumer confidence has started to fall the last couple of quarters due partially to tariff and trade concerns, but it remains at a high level. 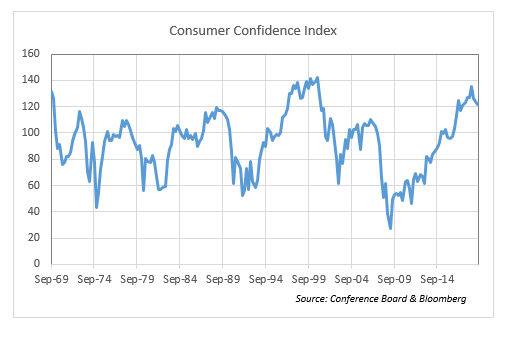 The absolute levels of spending and confidence have contributed to the resiliency of the U.S. economy. If confidence erodes further, we can assume spending will start to lag in the third quarter. Should this occur, the probability of a recession later in the year or early in 2020 increases.

While the U.S. consumer has been resilient, worldwide manufacturing activity has been weakening as indicated by the JP Morgan Global Manufacturing PMI moving to 49.8 in May. Readings below 50.0 mean activity is contracting. This represents the first time the index has fallen below 50 since its inception three years ago. Economies such as China, Germany, Japan, etc. that are heavy net exporters have incurred most of the weakness in global trade. Recently, U.S. PMIs have weakened as well indicating  the U.S. has started to feel economic repercussions from the weakness abroad.

President Trump and Chinese President XI Jingping agreed to avoid any new tariffs on goods traded between the two countries at their meeting last week. In addition, The United States and China will resume bilateral trade negotiations. President Trump said the U.S. will also allow Huawei to buy tech products from the United States when national security is not an issue. An alleviation of trade war fears is a positive. Concerns of tariffs and trade wars have at times cast a pall over the stock market despite the impressive year-to-date returns. Companies have started to defer investments until they have more clarity on what the global trading environment will look like. Supply chains have started to shift due to the fear that tariffs could be made permanent moving forward.

A key point to remember regarding the negotiations is that there still isn’t an official agreement. Both sides have agreed to talk and suspend previously discussed tariffs, but it is unlikely anything other than a modest agreement will be the result. The U.S. and China are moving in opposite directions and global supply chains are likely to change as a result. There is still an elevated risk of a protracted stalemate between the U.S. and China. We still think the most likely result is an agreement to reduce headline risk while realizing that a comprehensive trade deal is unlikely anytime soon.

Corporate debt outstanding and as a percentage of GDP has grown rapidly over the last decade as companies have taken advantage of low interest rates and credit spreads to leverage up their balance sheets. Now, some analysts are worried that there is a corporate debt bubble that could lead to another deep recession. 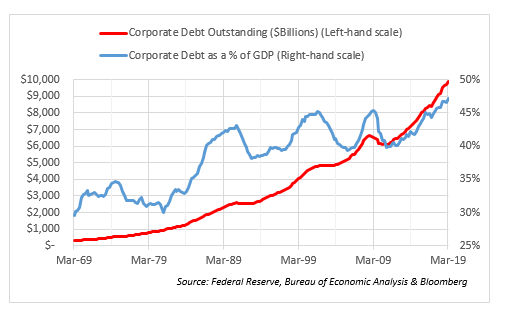 NPP does not believe that the problem is anywhere near as severe as the crisis caused by bad mortgage debt before the Great Recession hit. We do believe that there are issues that investors should be cognizant of. The covenants for senior bank loans have probably weakened too much. High-yield debt will almost assuredly experience serious losses the next time a recession hits just like it does in every other recession. BBB debt, the lowest tier of investment grade debt has grown rapidly and will probably experience more losses than in the past. Nevertheless, we think the defaults will be more contained than those sounding alarm bells would have you believe. The duration of corporate debt has risen meaningfully during the last decade. Companies have termed out their debt and extended repayments into the future. This is good if recession hits tomorrow as their need to refinance maturing debt has diminished. A recession would almost certainly create an increase in credit-spreads. Long-term bonds with high durations would experience large paper losses in a recession as investors demand more for credit products. Nevertheless, write-offs are unlikely to be as big as the naysayers would have you believe. An increase in credit spreads would likely be accompanied by a decline in stock prices. However, we believe decline would be in line with those seen during a typical economic slowdown.

Looking for a More Difficult Second Half

The returns in the first quarter in equities and bonds were phenomenal. We would have happily taken those returns for the full year when January started. The S&P 500 has experienced a couple minor pauses, but the trend has been up since the S&P 500 bottomed on December 24, 2018. An easing of trade tensions could lead to another leg up, but NPP is circumspect. We think investors should remain cautious here as we go into quarterly reports. Earnings are going to need to be strong if the market is to move much higher. If a recession doesn’t occur this year, we would expect equities to tread water for the rest of the year.