Investors relearned in 2018 just how volatile equity markets can be.  The year contrasted sharply with 2017 when the S&P 500 moved steadily higher with barely a blip to the downside.  2018 began the year with the S&P 500 shooting 7.45% higher in January and finished with the weakest December performance since the index expanded to 500 companies in 1957.  The December decline was the major contributor to the S&P’s -13.52% return for the quarter and -4.38% return for the year on a total return basis. Despite the messy showing, US equities did better than other major indices for the year. The MSCI EAFE index of developed country stocks fell 16.14% in 2018 compared with a drop of 16.64% for the MSCI Emerging Markets Index, although they both outperformed the S&P in the 4th quarter.  Similarly, the S&P 500 significantly outperformed both midcap and small-cap stocks for the year.  The S&P Midcap 400 fell 12.50% and the Russell 2000 Index of small companies fell 12.18%.

Only two S&P 500 sectors increased during 2018:  healthcare and utilities, but even those sectors saw significant drawdowns at different points of the year.  In fact, prior to December when practically all stocks fell at once, the year was volatile at the sector level.  Several sectors experienced rolling bear markets, meaning that they fell rapidly at different points during the first eleven months of the year. Six of the eleven GICS sectors finished down more than ten percent and each sector fell at least ten percent at some time during 2018.

Almost all major asset classes ended down in 2018. Other than cash and T-bills, there was nowhere to hide as opposed to 2017 when almost every asset class generated positive returns. Bond investors did better than equity investors, but even most bond investors lost money in 2018. The Bloomberg Barclays US Aggregate Bond Index edged up 0.01% for the year.  Gold ended the year down a modest 1.58%, while the CRB BLS Commodity Index slipped 5.36%. The main action in commodity markets was in the energy space. Oil prices fell 24.84% in 2018 due primarily to oversupply and the strong dollar. In the end, 2018 was a very challenging year for investors. 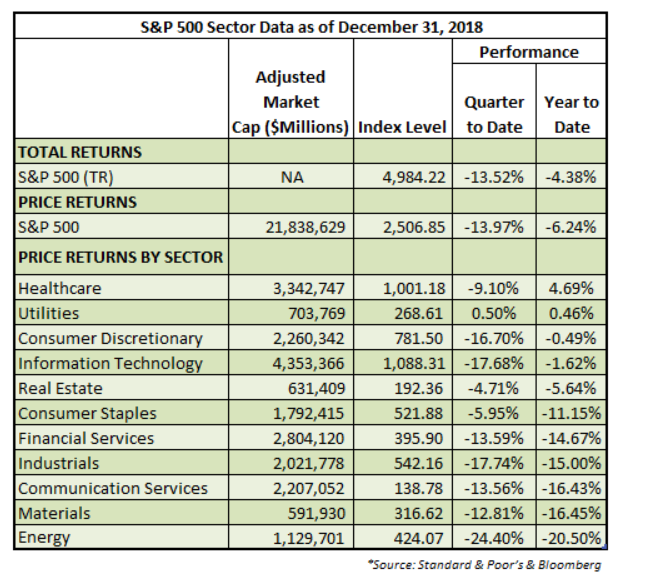 US and Global Equities Divergence

The weakness in equities was concentrated in the fourth quarter for U.S. stocks, although much of the rest of the world was weak throughout the year.  By the 3rd quarter, an unusually large divergence had developed between the performance of US and overseas equities. This was somewhat understandable since the US economy was much stronger than most other developed countries.  However, by the closing months of the year, it became obvious that the US economy was not completely immune from the ongoing weakness overseas.  We think it is positive that most global equity markets outperformed the US in the 4th quarter.  In this light, U.S. market weakness can be seen as a completion of the rolling bear market rather than the start of a new downtrend. Closing the gap with the rest of the world has set the stage for better prospective forward returns. Based on daily closing prices, the S&P 500 fell 19.78% from September 20 to December 24th before rallying 6.62% during the last four trading days of 2018. The correction left the S&P 500 at a very reasonable valuation with interest rates still low. People are worried about a recession, but if those fears abate, then the market could move higher given the PE ratio on 2019 earnings of 14.9 according to Bloomberg at year-end. 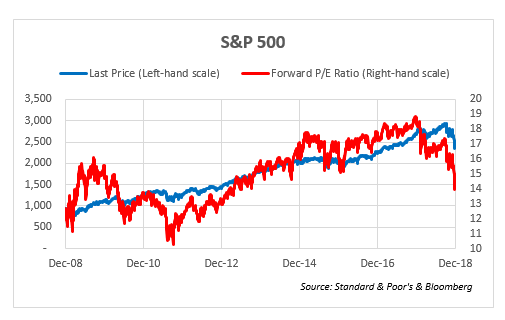 Equities received the bulk of the headlines, but 2018 was also a tough year for bond investors. The Bloomberg Barclays US Aggregate Bond Index (“Agg”) rose 0.01% for the year, but the index did not generate a positive return until the last day of 2018. Most other bond classes did worse. Corporate debt, emerging market debt and other risky debt sub-classes underperformed the aggregate. The main winners were cash and short-term Treasuries. Until November, Treasury yields rose across the board as the Federal Reserve increased the Fed Funds Rate, GDP growth improved, and the budget deficits widened. 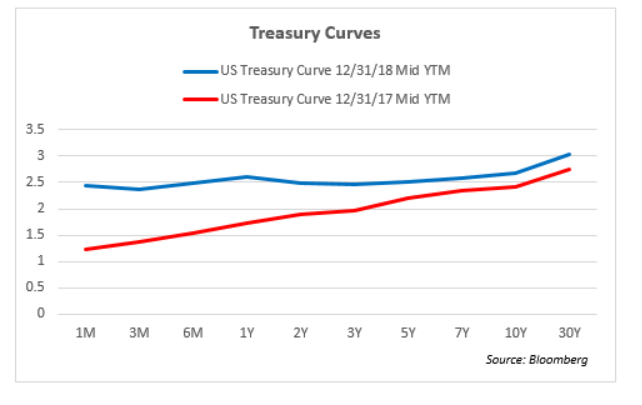 The yield curve flattened during the year as short-term rates rose more than long ones (see chart). Credit underperformed Treasuries as credit spreads moved higher in 2018. Credit spreads had been historically low when the year started. Now that spreads have widened, the investment opportunities are better in riskier bond sub-asset classes assuming we don’t get a recession in 2019. NPP had been cautious on fixed income when the year started. Now with higher interest rates and wider credit spreads, we expect 2019 to be a better year for fixed income investors than 2018 was.

The strong rally in equity prices in 2017 was driven mainly by the expectation of higher earnings growth given the tax law changes, reduction in regulations during the first year of the Trump administration, and a synchronized global expansion.  The earnings came through as expected, but by the middle of 2018, the drivers of earnings growth were fading and investors were staring at a sharp slowdown in 2019.  This forced a shift in focus to the macro economic issues and especially the interest rate outlook.  The equity markets were near all-time highs when Fed Chairman Powel said in an interview we were a long way from the neutral rate.  While this statement was in line with the Fed forecast of 5 rate increases over the upcoming 15 months, the markets were caught by surprise that the Fed was serious.   Other Fed officials moderated this outlook somewhat over the next several months, but the Fed raised interest rates in December and still called for multiple increases in 2019.  It did not help, of course, from an investor standpoint that Trump began directing tweets at Powell raising concerns about the independence of the Fed.  This was highly inappropriate and raises all sorts of uncertainties that investors did not need. Chairman Powell brushed off the President’s comments at his December press conference and indicated that he still believed the Fed should be in tightening mode, but we were closer to neutral at this point and the risks were now more balanced.

It should be noted that Powell has long been against the idea of the “Fed put”: the belief that the Federal Reserve will prop up equity markets and other risky asset markets. If Powell is trying to destroy the belief in the “Fed put” moving forward, NPP believes this is wise. Too lenient credit markets lead to investments that are likely to turn out poorly both for investors and lenders. Artificially low rates typically lead to mal-investment which leaves the economy at risk. We are not sure if Powell’s actions are consistent with trying to kill the Fed put or if he believes additional tightening is necessary. If his actions are guided by the belief that markets need to start paying more attention to fundamentals, and less to the Fed, we applaud him. We think when investors start paying attention to valuations, they will find many reasonable investments in current markets. If instead Powell and the Fed really do think they need to tighten here to ward off inflation, it would make us much more cautious about the market and the economy as we head into 2019.

NPP believes these and other domestic concerns, the latest of which is the government shutdown, are self-inflicted wounds that are likely just noise. Overseas, the problems are serious. Great Britain is still trying to manage Brexit, and this has created uncertainty in Britain and Europe. Europe is dealing with immigration issues, Italian budget deficit problems, and the fraying of some of the ties that bind the EU together. There are populist movements surging on the right and the left, while farmers revolt in France over diesel taxes. In Germany, their largest bank’s stock continues to move lower with no apparent end in sight.

Meanwhile, the disagreements with China remain intractable. Our best guess is that tariffs will go up at the end of the ninety-day delay imposed by the Trump administration. It also possible that a détente between the United States and China coupled with an agreement lacking in substantive reforms is signed. The disagreements with China are too deep-seated, bipartisan, and do not lend themselves to quick solutions. China’s economy has suffered in 2018, despite what the official data says. Growth there is the slowest in at least a decade, but it appears to be bottoming and will likely inflect higher in 2019.

Uncertainty Creeping into the Economy

Corporate profits ended 2018 at an all-time high while the labor market is in its best position since the recession ended in 2009. The rate of economic growth has slowed domestically, but it is still clearly positive. For a variety of reasons, corporate and consumer confidence waned in the second half of 2018. Consumer confidence indicators have edged down slightly, but remain at historically high levels. Meanwhile, corporations are increasingly concerned with headwinds from trade. Corporations are downshifting their expectation for the growth of their businesses in 2019, but they still expect their businesses to grow in 2019. Our concern is that slightly less than half of US CFOs surveyed in December in Duke's Fuqua School of Business/CFO Magazine Global Business Outlook expect the United States to enter recession at some point in 2019. Lower confidence could become a self-fulfilling prophecy if animal spirits disappear and necessary investments are deferred. We believe slowing, but positive capital investment due to tighter capital markets and normalized risk premiums would be a long-term positive for the United States economy and financial markets. What we don’t want to see is the deferral of needed business investment due to tightened financial conditions. We haven’t seen this yet, but the concern is that perception becomes reality. NPP believes the U.S. economy is still strong enough to absorb these and other headwinds and continue growing in 2019. We will closely monitor domestic economic reports to ensure that the data remains consistent with sustainable growth.

In addition to trade, the strong dollar has modestly hurt growth. Several multi-nationals mentioned that the strong dollar reduced revenue and earnings growth slightly. Strong corporate profits are necessary for economic growth and appreciation in equity markets. The stronger dollar is not a huge concern to us at this point. It partially reflected strong U.S. demand and we do not expect the dollar to be a major headwind to earnings growth going forward. Despite the macroeconomic concerns, U.S data is still reasonably strong. Leading indicators are still indicating economic growth, although lower than 2018. NPP thinks it likely that after a sugar high following the tax cuts, real GDP growth will approximate two percent again in 2019.

2018 was a mirror image of 2017 for financial markets. 2017 was a year where investors could make money in almost any asset class. 2018 was the reverse and almost every major asset class finished down for the year. We think the current correction/mild bear market is another mid-cycle slowdown and correction that refreshes the market as occurred in 2011 & 2016 and provides investors a buying opportunity. While we expect equity markets to be choppy in the coming months, buy-and-hold investors who can stomach volatility are likely to be rewarded in 2019. Based on 2018 closing prices, we expect low double digit returns in equities. We think fixed income investors will also be rewarded across the spectrum. We do not think that rates will move much in 2019. It’s possible longer rates may move up slightly, but not enough to dampen returns. NPP sees real GDP growing at slightly above two percent, down from growth above three percent in 2017. This may not be great, but it should be good enough for markets worried about the next recession. While we can’t dismiss this possibility, we do not think it will happen in 2019 and are buyers of equities at these levels. We are focused on U.S. stocks that have experienced bear markets with good balance sheets, and emerging market equities.