After falling 20.00% in the first quarter of 2020, the S&P 500 rebounded 19.95% in the second quarter to end the first half of the year down 4.04% on a price basis. The second quarter increase was the best quarter for the S&P 500 since the fourth quarter of 1998 which also came on the heels of a mini market panic and was accompanied by a rush of global liquidity. All eleven sectors in the S&P 500 rose during the quarter, and only utilities and consumer staples increased less than ten percent. Year-to-date, the S&P 500 continues to be led by the sectors that have powered the market higher since 2009: information technology, consumer discretionary, communications services, and healthcare. The big laggards year-to-date include cyclical sectors such as energy, financial services and industrials, but also somewhat surprisingly utilities. The mid-cap and small-cap indices outperformed the S&P 500 but are still lagging significantly through the first half of the year. Broad international indices also rose, although they lagged the S&P 500. The MSCI EAFE and MSCI Emerging Market Indices are down 12.59% & 10.73%, respectively, year-to-date. In short, the S&P 500 and more precisely secular growth companies remain global market leaders.
Bond yields fell in the second quarter with the exception of the very short end of the Treasury curve. Additionally, the spreads declined on credit bonds and that led to strong returns for fixed-income investors. The Bloomberg Barclays Aggregate and Intermediate US/Government Credit Indices ended up 2.80% and 2.99%, respectively. Oil prices rose 91.75% for the quarter to $39.27 yet are still down 35.69% year-to-date. Gold prices continued to shine and were up 12.92% for the quarter and 17.38% year-to-date. The dollar gave back some of its first quarter gains but is still up 1.04% year-to-date. The one area of notable weakness was the CRB BLS Commodity Index which was down 3.03% for the quarter and 10.32% year-to-date. This is hardly surprising as the global economy remains well below peak levels. 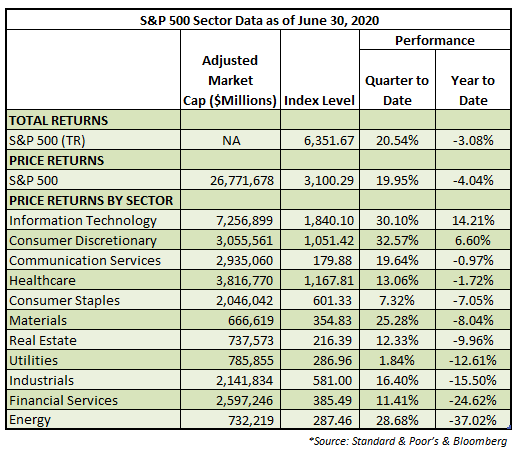 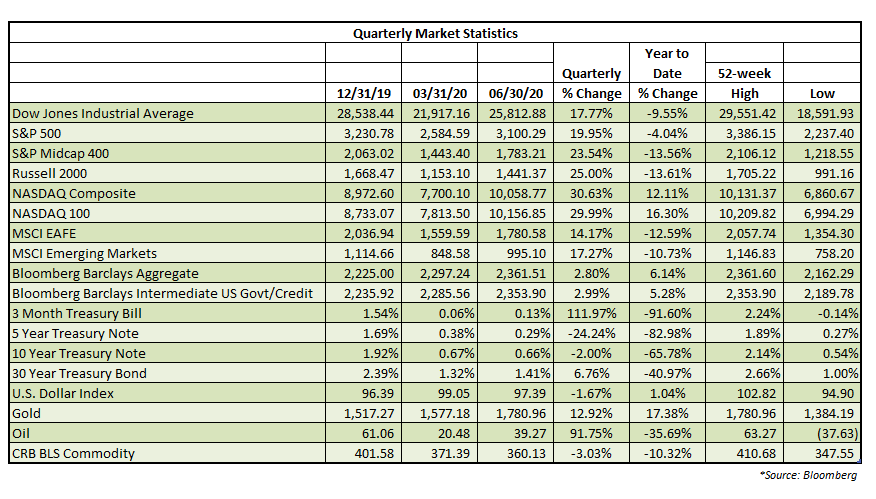 Governments and central banks around the world have provided unprecedented support to economies and financial markets. Global M2, which is a broad definition of money including cash, checking accounts, savings deposits, etc. has exploded higher as policymakers scramble to prevent a depression in the United States. In addition, the U.S. government has passed massive amounts of fiscal accommodation. Domestic M2 has grown approximately 17.9% year-to-date while the Federal Reserve’s balance sheet has jumped an incredible 70.0% so far this year. As a comparison, M2 and the Federal Reserve’s balance sheet grew at a compounded rate of 5.9% and 5.8%, respectively for the eleven years ending 2019. 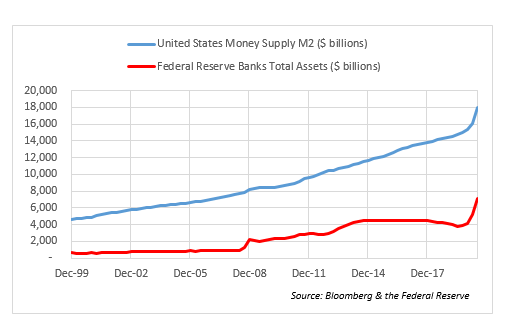 This has almost certainly reduced the immediate economic damage resulting from the pandemic, but parts of the economy cannot nor should not reopen until there is a medical solution. Until the economy can return to something resembling normal and there is an outlet for monetary and fiscal stimuli, much of that support has gone into markets, not economies. The S&P 500 which tracks the strongest U.S. companies has held up remarkably well thanks to large global technology companies and other multinational companies with resilient business models and balance sheets. Credit markets have rallied significantly after freezing up and global credit spreads have tightened significantly while Treasury yields are near all-time lows. The Payroll Protection Program (PPP) and other government programs have helped some struggling businesses survive, while others have declared bankruptcy to restructure debt or closed their doors permanently. The combination of monetary and fiscal stimulus along with numerous targeted government programs has helped arrest an economic freefall.

We do not want to imply that monetary accommodation is the only reason financial markets stabilized. Once the fear of a depression was taken off the table, the panic-induced March crash became susceptible to a rapid bounce back, although the speed and staying power of the rebound surprised us. Lower Treasury rates and falling bond yields make equities more attractive on a relative basis as investors search for yield and return. Equities become relatively attractive when you need to look all the way out to a nineteen-year Treasury just to earn one percent. If the virus does not have a severe second wave and the economy does not stay in an extended lockdown, equities will become even more reasonably valued.

Global liquidity has clearly helped, but it is not the only reason for the rally. Early indications that the United States was flattening the curve helped to put a floor under the US equity markets and as new cases declined the S&P 500 rallied. Now, new case growth is once again on the rise. Unsurprisingly the S&P 500 has paused after rallying 44.47% from the daily close of 2,237.40 on March 23rd to 3,232.39 on June 8th. New coronavirus cases started to spike mostly in states that initially avoided the worst of the coronavirus and hit a high on June 27th according to the CDC. Fortunately, deaths are still trending down (see chart). 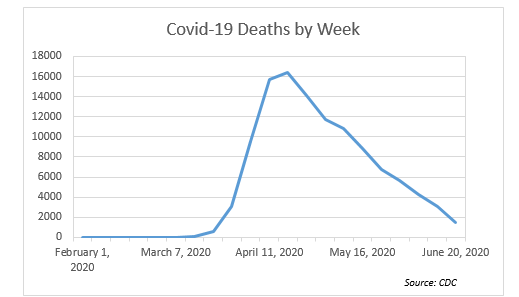 Ideally new case growth will not be met with escalating mortalities. The people being infected are on average a lot younger and less susceptible to severe coronavirus cases. It’s likely that better procedures to protect those at risk will result in falling mortalities. We hope that people, especially younger people, will take greater precautions now that cases have risen in many states that initially looked to have escaped the worst of the coronavirus. Masks have been shown to be very effective at preventing the spread of the virus. NPP hopes that with an increase in new cases, people will become more vigilant against the virus through a combination of behavioral change and state and local mandate. This remains to be seen. If the fatalities decline and ICU numbers fall, equity markets will likely rally in the back half of the year after this much needed consolidation. On the other hand, if fatalities start rising again, we expect equity markets to head lower.

Fortunately, we appear to be making progress on the medical front. Remdesivir, dexamethasone, and other treatments have been shown to reduce fatality rates and lessen hospital stays for COVID-19 patients, but they are not cures for the disease. Longer-term, a medical solution, whether it is in the form of a vaccine or an annual shot is needed to get the economy back to full capacity. It is going to be hard to justify opening bars, sporting events, conventions and other places where random people gather until the virus can be dealt with medically. There are billions of dollars and numerous companies working on medical solutions and we are hopeful that one of the promising ones will work.

Other parts of the economy can reopen and bounce back relatively quickly with the proper precautions. Housing is one such example. While the unemployment and underemployment rates remain high and likely will even after the virus risk has ended, those with jobs are learning to work remotely from home. This has accelerated the trend of young families living in city centers moving to the suburbs. This will require more housing, and specifically single-family housing which has high impact as far as economic and job growth.

This year has seen secular growth companies massively outperform cyclical companies in a continuation of the trend that started in 2009. Value stocks often become market leaders after deep recessions. We do not think that will be the case this time although there are parts of the value space that look cheap and primed for a period of outperformance if the market goes higher. Certain parts of the market such as real estate, banks and other pockets in the value space have been beaten down relatively and absolutely and are due for a period of outperformance. We believe there are attractive opportunities here but only for the companies with excellent balance sheets and only after a medical solution emerges. However, once that happens, the world will still be mired in a slower growing economy where secular growth is scarce and technology maintains growing importance in our lives whether the technology is video-conferencing, Microsoft Teams, etc. Additionally, most of the secular growers have better balance sheets and safer revenue streams and should continue to grow long-term. NPP believes the main threat to the secular growth companies is regulatory. Whether the threat looms as a result of advertising policies, privacy, something else, or size, their growing impact makes them susceptible to government intervention or regulation. If the chance of this grows, we will change our minds. Until then, we still believe secular growers should remain the core of any equity portfolio.

Until the risk or perception of risk from the coronavirus abates, we think it will be harder for equity markets to move higher. The good news is that treatment for the coronavirus is moving forward. Unfortunately, new case growth has accelerated after partial reopenings in many states in the Western and Southern parts of the country that mostly avoided the virus initially, although daily fatalities are still trending down. Government and Central Bank support here and abroad has effectively put a floor under the equity markets and secular growth companies have been the main beneficiaries. We expect the market to remain range-bound until a medical solution emerges. When the market moves out of its recent trading range, we expect that move will be higher.