After a first quarter with significant upside and downside volatility, the price action on the S&P 500 was relatively tame in the second quarter. The S&P 500 increased 2.93% for the quarter and 1.67% year-to-date. Smaller stocks outperformed larger stocks as investors flocked to companies with lower foreign exposure amidst a strengthening dollar and international trade concerns. The S&P Midcap 400 increased 3.88% for the quarter, while the Russell 2000 small cap rose an impressive 7.43%. Meanwhile, emerging markets underperformed significantly in the first quarter due to the same trade concerns and the weak dollar. Developed foreign markets continued to lag the S&P 500 and the MSCI EAFE Index is now down 4.49% for the year after falling 2.34% during the quarter. Even though the S&P 500 was little changed for the quarter, there was significant variance in sector performance. Energy stocks led the market thanks to a 14.18% increase in oil prices in the second quarter. Somewhat surprisingly, oil prices are now up 22.72% for the year despite the dollar being up 2.55% year-to-date. Consumer discretionary and information technology stocks increased 7.84% and 6.75%, respectively, for the quarter and continue to lead the bull market higher. Four sectors declined in the second quarter, but there was no clear theme causing their decline. Industrials declined on the heels of trade concerns and a strong dollar, while the financial services sector declined due to the flattening of the yield curve. (Yields increased more on the short end of the curve than on the long end of the curve.) The consumer staples and telecom services sectors fell for more idiosyncratic reasons. 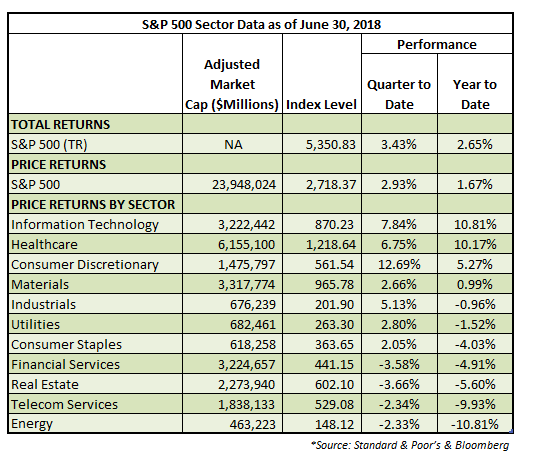 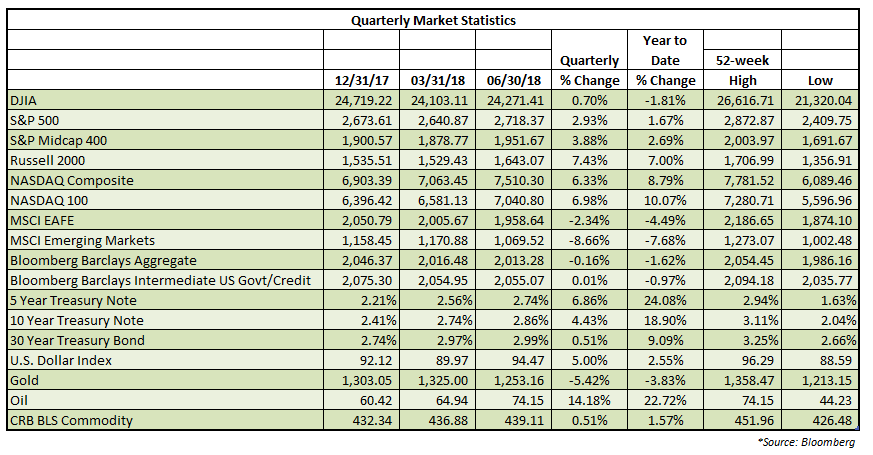 Robust earnings growth pushed the S&P 500 to new all-time highs on January 26th of 2018. Strong global GDP growth, corporate tax cuts, and the weak dollar contributed to the rapid rise in corporate earnings. Now some of those tailwinds are fading or turning into headwinds. The American economy accelerated in 2018 and second quarter real GDP growth might be above four percent. However, the synchronized global expansion of 2017 which saw all major economies growing nicely has disappeared. European PMIs have moderated. Pockets of stress have arisen in Europe and emerging markets. Global growth is still solid, but it is no longer synchronized which raises sales and earnings growth concerns. The corporate tax cuts helped the economy and corporate earnings. However, the tax cuts gave earnings a one-time boost and will no longer be a tailwind going forward. The U.S. Dollar Index weakened 9.87% in 2017, and was a key contributor to positive earnings momentum. After bottoming in February 15th of this year, it has risen 6.63% and is now up 2.55% from December 31st. Several U.S. based multinationals that report in June mentioned the dollar as a drag on projected revenue and earnings growth moving forward. Below the line, interest rates have been rising which is helpful for savers, but hurts corporate borrowers. Corporations have levered up over the past ten years, and have been helped by historically low borrowing costs. Maturing bonds and loans are often being refinanced at a higher interest rate and this will be a drag on profit margins, especially for those companies that are highly levered. 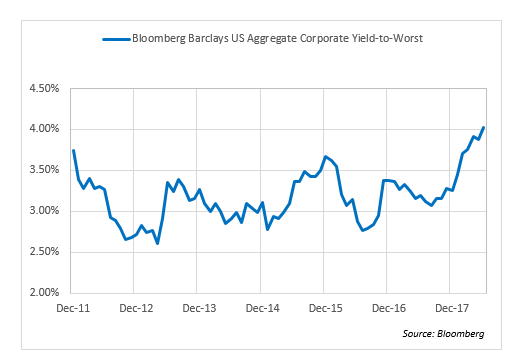 Fortunately, while some of the tailwinds are weakening, companies are still forecasting robust earnings growth. It is important for the health of the equity markets that these projections hold up. If current estimates are accurate, market averages should be fine a year from now.

In our opinion, the biggest current risk to financial markets is a trade war. Whether it is with China, Canada & Mexico, or Europe, trade wars seldom benefit anyone. There may be relative winners from trade wars, but even the relative winners usually see their economies suffer absolutely. Freer trade is usually better for the economy than tariffs and protectionism. That does not mean that the existing trade framework is fair or wholly beneficial for the United States. NPP believes that the United States gets taken advantage of when it comes to international trade. The average tariff on goods imported to the United States is below the average tariff on goods exported from the United States. Especially in globally-linked supply chains where many final goods have parts originating from many different countries, it is unlikely that a full-blown trade war would produce any winners. The United States has the largest trade deficit and so a shrinkage in global trade would probably hurt us the least. Nevertheless, it is hard to imagine the United States and the rest of the world escaping a severe global recession in full-blown global trade war. NPP does not believe this will happen, but will monitor all developments on the global trade front. There are competing viewpoints in the White House, and we will watch to see how much sway the protectionists hold over the President as we move forward. The threat of escalating tariffs does worry us and if it happens, we would almost certainly become more cautious on equities.

The other big issue, often thrown in with trade discussions, is intellectual property (“IP”) security. China makes a habit of stealing the IP of firms centered in the United States and abroad. This issue is different from tariffs in that Chinese firms are often breaking existing laws or agreements. There is broad agreement in Congress and globally that something needs to be done to counter this. The House of Representatives recently passed the Foreign Investment Risk Modernization Act by a vote of 400-2. Additional IP protection does not ensure a trade war with escalating tariffs. NPP favors IP protection and does not think that a resolution to the issue of IP theft would be a market negative.

NPP does not believe that a full-blown trade war will develop. While there are a couple high-level advisors favoring tariffs that have the President’s ear, there are others that council more measured steps and we think they will win out, although we acknowledge the risk is rising that the protectionists in the White House win the trade debate. A key risk is that tariffs, or the threat of them, hurt corporate confidence and this causes companies to put an end to or delay their capex and hiring plans, counteracting the positive economic effects of deregulation and tax cuts. Investor concerns about trade have led to small-cap outperformance, and underperformance from exporters and international markets. We would expect these trends to continue if tariffs and/or trade tensions escalate.

Expect More of the Same

Global equity markets performed phenomenally well in 2017. 2018 was always going to be a more challenging year for investors. The S&P 500 is up slightly through June while volatility has picked up significantly after nearly disappearing in 2017. The economy continues to grow domestically, and we don’t see this reversing in the immediate future. However, there is a risk that earnings slow significantly in the first half of 2019. NPP feels earnings momentum is necessary to power the market higher, especially if interest rates climb or remain near current levels. This risk is currently a smaller concern to us than potential trade wars. While NPP believes that the United States has legitimate trade grievances that can be directed against many of its main trade partners, tariffs are very rarely effective in improving growth. Usually, the opposite happens and domestic and global growth suffer. We worry more about a hit to confidence, than an all-out global trade war. Just the threat of one is likely to dampen or delay capital investment and hiring plans. If this happens, NPP thinks that increased market volatility will result. Still, single-digit returns are the most likely path for equity markets in the second half of 2018.