After a strong rebound from last December’s lows during the first half of the year, the S&P 500 consolidated its gains in the third quarter. The S&P 500 rose 1.19% in third quarter and finished up 18.74% year-to-date. International indices continued to lag the S&P 500. The MSCI EAFE and MSCI Emerging Markets fell 1.71% and 5.11%, respectively in the quarter and are now up 9.85% and 3.66% for the year. The utility and real estate sectors were the standouts in the quarter. The only sectors to decline in the third quarter were the energy, healthcare and materials sectors. The energy and materials sectors were hurt by declining commodity prices and global growth concerns while the healthcare sector lagged largely on legislative concerns.

Bonds continued to generate impressive returns as interest rates declined. The Bloomberg Barclays Aggregate Index rose 2.27% for the quarter and is now up 8.52% for the year. Bond yields continued their steady year-long decline through August. Yields rallied off their 2019 lows in early September and may have finally bottomed. The dollar rose sharply in the third quarter. This is due to several factors including upward pressure from tariffs, U.S. economic data outperforming international data, and the significant yield differential between U.S. and global sovereign bonds. Gold rallied 4.46% in the quarter and is now up 14.81% for the year. In a world with almost fifteen trillion dollars of negative-yielding bonds, gold should continue to be well-bid even if it might be overextended in the short-term. Oil and global commodities fell on light global demand despite the one-day spike following the drone attack on Saudi oil infrastructure. 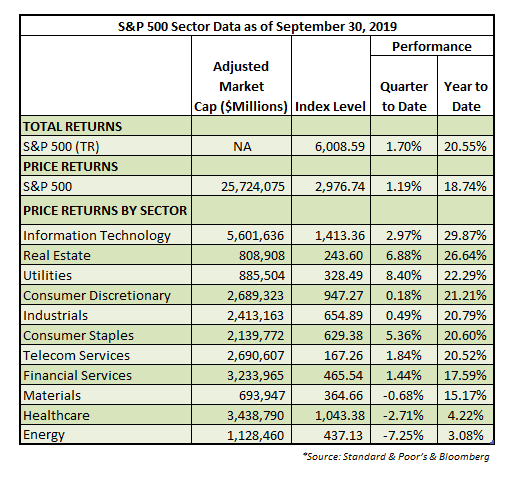 There have been numerous headlines that have dampened global growth expectations and confidence across the board. Depending on your point-of-view, these include trade tensions between the United States and China, President Trump hectoring Jay Powell and the Federal Reserve Board, and the recent push for impeachment. While the trade tensions with China have resulted in some direct economic damage to the United States, most of the other headlines have merely led to reduced business and consumer confidence. It is not clear how much this has led to deferred spending or investment, but it can’t have helped. This has contributed to unease about economic growth later this year and in 2020.

There is increased concern among many pundits that a recession is around the corner. This is evidenced in fund flows where investors have been continuously putting money into bond funds, not equity funds. Several surveys of hedge funds and individual investors indicate higher-than-average pessimism. The number of web searches for recession has spiked higher (see chart). Confidence indices have declined from their highs, although they remain elevated. 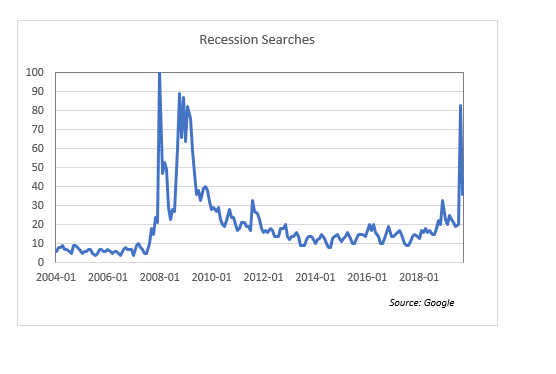 This expansion is one of the longer ones on record, but NPP is still not overly concerned about an imminent recession. We still think there is a less than fifty percent chance that one starts in the next twelve months. Labor market indicators still denote strength even though some statistics are slightly off their highs at very solid levels. Global PMIs and the Citigroup Surprise Indices have been moving higher recently. Global PMIs still look weak absolutely, but some look like they have bottomed. Only time will tell, but an improvement in manufacturing data here and globally greatly reduces the near-term chance of a recession. The yield curve has flattened, and it bears watching. A sustained inverted yield curve would be bearish for the economy and equity markets in our opinion. While the recent data is not definitive, NPP believes this is another mid-cycle pause or “mini-recession” that leads to continued slow but consistent growth. Part of the weak data is a give-back after a couple quarters of 3%+ growth. We still think the U.S. economy remains in a two percent growth world while acknowledging risks are more elevated than they have been since the expansion started.

The yield curve flattening has been accompanied by a broad global decline in interest rates. Low domestic interest rates are robust when compared to global interest rates, especially those seen in the developed world. There were almost fifteen trillion dollars of negative yielding bonds globally as of September 30th and that peaked at 16.8 trillion on August 30th. The U.S. economy is growing more slowly than the historical norm, but nominal GDP has been around four percent per year since the Great Recession ended. NPP does not believe the state of the U.S economy justifies the current low rates. However, with rates negative or low globally, U.S. interest rates are being dragged down by overseas issues as capital searches for the higher returns that can be found in the United States.

Yield curve inversion is usually followed within a year or two by a recession. Fortunately, other indicators of stress that tend to precede a recession have not occurred. Corporate credit spreads have not widened in 2018 and have instead tightened. They remain higher than their 2018 lows but are in no way indicative of an oncoming recession. The flatter yield curve gives us pause, but with few other indicators confirming an imminent recession, we continue to believe that the signal is being muddled by global financial market conditions. If the yield curve were to invert more and/or corporate credit spreads widened, then we would become concerned.

Low interest rates have led to a recent increase in housing starts and refinancing. Lower mortgage rates have historically supported the housing sector and this time doesn’t appear to be any different. Housing activity weakened when interest rates rose. It now appears that housing has turned from an economic drag to a support for growth. We are not projecting a boom, but stabilization in this sector would be a welcomed boost for the economy.

No Dramatic Moves Expected in the Fourth Quarter

We expect the S&P 500 to grind slightly higher in the fourth quarter and maintain the strong year-to-date returns. The fourth quarter is historically good for equity returns. The 2018 sell-off was a major aberration. We believe intermediate and long-term Treasury bond yields have seen their lows for the year. We will reassess as economic data and third quarter earnings are reported. If the earnings and economic outlook take a turn for the worse, we are likely to reduce equity exposure.