The S&P 500 rose 7.20% in the quarter, its best quarterly performance since the final three months of 2013. Large cap American stocks were the clear winners as the mid-cap and small-cap indices returned 3.48% and 3.26%, respectively. Foreign indices trailed the U.S. with the MSCI EAFE Index rising just 0.76% and the MSCI Emerging Markets Index falling 2.02%. The solid quarterly performance in the U.S. masks what has been a rather volatile year at the sector and individual stock level. A few stocks have fallen dramatically after disappointing earnings numbers and several sectors have been held back by macro headwinds. In fact, there has been a rolling bear market in a variety of stocks and sectors despite the strength of the S&P 500. The difference in sector performance is striking. The consumer discretionary, information technology, and healthcare sectors are all up more than fifteen percent year-to-date and are the only three sectors that have outperformed the index year-to-date. They add up to approximately half of the index. The healthcare sector was the standout in the third quarter, increasing 14.04%.  Three sectors, materials, energy and real estate, fell during the quarter and six of the eleven sectors are down year-to-date.

Other financial markets were mixed. Treasury yields moved higher in the third quarter and the Federal Reserve raised the Federal Funds rates another twenty-five basis points on September 26th. The aggregate bond indices outperformed Treasury bonds as corporate credit spreads tightened during the quarter. Meanwhile, after rising in the first half of 2018, the dollar index was little changed. Gold, oil and the CRB BLS Commodity Index all traded lower during the quarter. 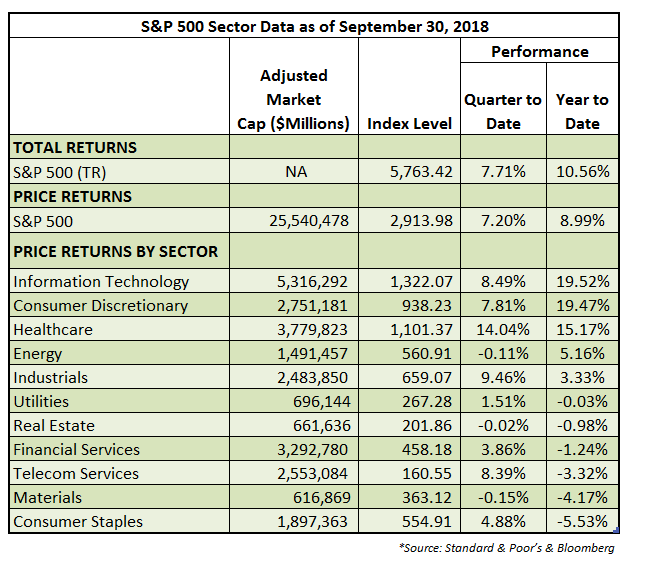 U.S economic growth in 2018 accelerated to a 4.2% annual rate in Q2, the highest since the third quarter of 2014.  This follows an improving 2017, but last year was helped by the global economy firing on all cylinders. The difference in 2018 is that while the U.S. economy continues to improve, the growth rates in Europe and China have slowed. Moreover, several emerging market economies went into recession and/or had to deal with their currencies depreciating against the dollar. The lack of volatility that characterized global markets and economies in 2017 has quickly turned into a more uneven global economy coupled with tougher stock and bond markets. U.S. growth has accelerated, and the only real hint of weakness is in the homebuilding market. Part of the reason for low home starts is a lack of new home supply, although higher prices and interest rates are surely contributing factors. The manufacturing and service sectors remain strong. Weekly unemployment claims are near all-time lows despite a growing population and workforce. Wage increases are improving, but so is productivity growth, and wage inflation is not high enough to cause runaway inflation concerns at this point.

The outperformance of the U.S. stock market compared to the rest of the world began in 2011 and continued through the third quarter. By some measures, American companies are more richly valued than their international competitors. Can this trend continue? The magnitude of outperformance has been impressive, and NPP doubts that it can. Nevertheless, we also doubt that international markets will take the baton and start outperforming U.S. stocks in the immediate future. Europe has many issues including Brexit, Italy, poor demographics, and immigration problems, to name a few. Additionally, Europe’s banking system still has mountains of bad loans and is struggling under the negative interest rate regime. Deutsche Bank, Germany’s largest bank, has close to one and a half trillion euros in assets, but it’s stock is near a thirty year low, and it has lost money the last three calendar years. 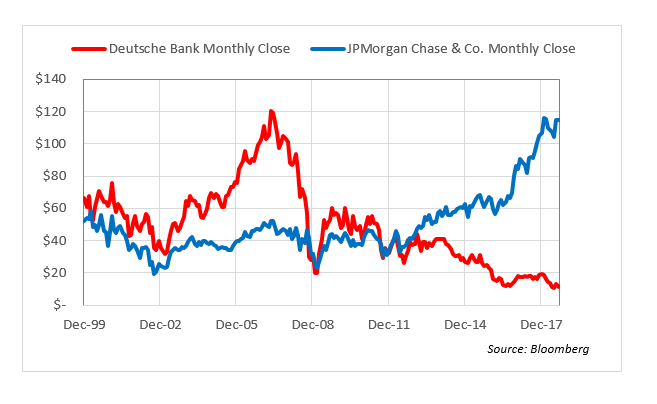 If the biggest bank in Europe’s largest economy is still floundering, it is unlikely that European markets can start outperforming the S&P 500. Large American banks such as JPMorgan that solidified their balance sheets are now prospering. Moreover, the S&P 500 is dominated by innovative technology companies, while Europe is home to mostly slow-growing old economy companies. We expect the S&P 500 to at least match developed markets performance in the immediate future.

The outlook for emerging markets is more interesting to us. They are much more volatile than U.S. markets, and subject to macro risks. However, we think the cheapened valuation means that long-term investors are likely to be rewarded in emerging market equities especially if you are looking out five to seven years. The exact timing is uncertain. While the dollar is strong, emerging markets are unlikely to outperform American stocks. Nevertheless, we think the valuations are compelling enough to warrant a position.

Standard & Poor’s is making changes to their sector classification system. The telecommunication sector had dwindled to three stocks: Verizon, AT&T, and CenturyLink, and amounted to less than two percent of the S&P 500.  On October 1st, the telecommunications sector was eliminated and replaced with the communication services sector. It now consists of the old telecommunication sector, interactive media companies such as Alphabet and Facebook, movie and entertainment companies such as Netflix & Disney, in addition to broadcasting, cable & satellite, advertising, publishing, and video game companies. The new communications sector will make up about 10% of the S&P 500, while the market cap of the information technology sector will shrink from about 26% to 21%, and the consumer discretionary sector will fall from 13% to 10%. The reclassification is unlikely to affect individual stock valuations a year from now, but may affect portfolio managers in the short term as managers with sector mandates are forced to sell certain stocks while buying others. The new classification system is probably a better reflection of how the economy works in 2018. We don’t recommend making portfolio changes due to the new system.

The United States announced an update to NAFTA on the last day of the quarter. The United States-Mexico-Canada agreement (USMCA) updates NAFTA after twenty-five years. It is probably market neutral and maybe a market positive. Despite rhetoric coming from Trump and some in the administration, the United States does not have plans to shred all existing trade agreements. Nor is it going to start imposing unilateral tariffs against all countries. The agreement signifies that the Trump administration does not want an all-out trade war, but rather an alteration of existing agreements that reflect the realities of the current economy.

The USMCA agreement does not mean that a deal with China is imminent. The disagreements and annoyance with China’s trade practices are not unique to the Trump administration. There is bipartisan agreement in Washington that China’s trade practices are unfair. Moreover, many countries around the world concur with the United States that trade arrangements with China must change. The United States and the rest of the developed world have capital markets that are accessible, while China frequently imposes restrictions on foreign investments, even in non-strategic industries. Finally, there is the issue of technology theft by Chinese companies. There are also strategic interests in the South China Sea and elsewhere that come into play. These factors point to a lengthy trade dispute with China and NPP does not expect a comprehensive settlement any time soon. We do not think that increasing trade tensions with China are a reason to become more cautious about stocks at this point.

Earnings growth has been impressive lately. Second quarter earnings grew 25.61% while sales increased 9.54%. The strong economy, tax cuts, and a weakening of the dollar on a year-over-year basis contributed to a strong reporting season. Early in the third quarter reporting season, a couple large companies have noted dollar headwinds. A slowdown in earnings growth, even if it is only due to the weaker dollar, and not a larger issue might lead to a pause or pullback during earnings season. Interest rates may also affect equity markets. Ten and thirty-year Treasury rates have been threatening to move higher. If they were to move up quickly and not gradually, they could also be short-term headwinds. Despite these risks, we think any sell-off would be another buying opportunity. NPP thinks the recently signed USMCA takes the worst-case scenario of a protracted global war off the table. As such, continued economic growth will push the market higher with bouts of volatility here and there.