2020 was a year for the history books. COVID-19 created a pandemic unlike any we have seen in the last 100 years. Fatalities from COVID-19 in the United States and globally are now estimated to be in excess of 340,000 and 1.8 million, respectively.  The initial response was a temporary secession in economic activity to slow the spread.  This coincided with a stock market crash reminiscent of 1987 and a bond market freeze up that was probably worse than the depths of the 2008 financial crisis for a short while. All of this occurred during a Presidential race in a divided country ending in an election unlike any we have ever seen. Despite all of this, the economy has started to recover, and financial markets have produced very strong returns although the path was extremely uncomfortable.

Small-cap and mid-cap equities have lagged the S&P 500 for a while now. Both indices rose for the year and have outperformed the S&P 500 since the March 2020 lows. The Russell 2000 Index and the S&P Midcap 400 Index increased 30.99% and 23.93%, respectively in the fourth quarter. The broad international indices lagged the S&P 500 even with the 6.69% decrease in the Dollar Index for the year. The MSCI Emerging Markets Index almost matched the performance of the S&P 500 Index for the year rising 15.84% while the MSCI EAFE lagged, ending up 5.43%. However, the MSCI Emerging Markets Index and the MSCI EAFE both outperformed in the quarter rising 19.34% and 15.75%, respectively.

2020 was a good year for fixed income investors on a total return basis. Yields started the year low and ended 2020 much lower leading to strong fixed income returns. Three-month T-Bills ended 2019 yielding 1.54% but ended 2020 yielding a paltry 0.06%. Yields fell across the curve, although the decline was more pronounced on the short end after the Federal Reserve lowered rates to zero and pledged to maintain low rates for a while.

Gold prices rose 25.12% for the year, although they barely budged during the fourth quarter. Oil prices rose 20.64% in the quarter to finish down 20.54% for the year. This after a remarkable first quarter that saw oil prices briefly fall below zero and close at -$37.63 on April 20th, as storage capacity became full due to the global economic shutdowns. Non-energy commodities did well in 2020 and the broad CRB BLS Commodity Index rose 9.88% for the quarter and 10.52% for the year. 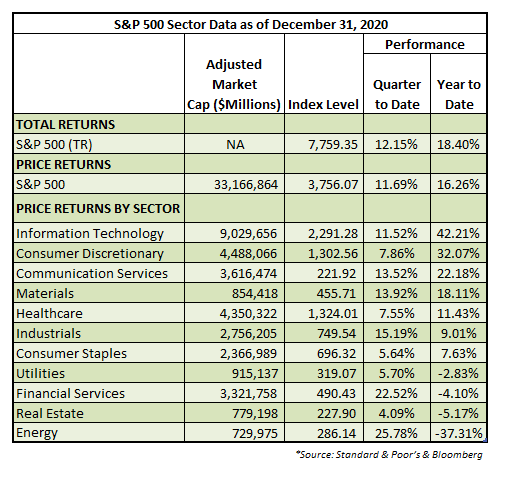 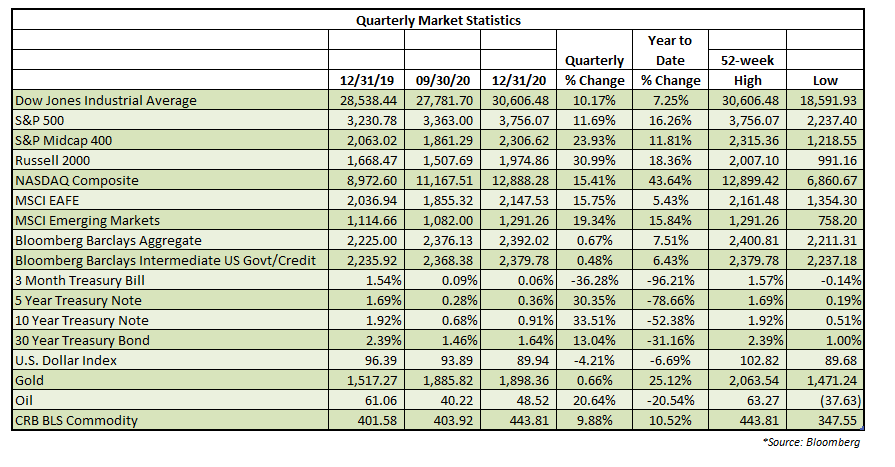 Various health experts have warned about the threat of an airborne respiratory virus for a while, but that doesn’t make what happened any less remarkable or devastating. Despite the early warning shots from SARS, MERS, and the H1N1 influenza outbreak, most federal, state and local agencies were woefully underprepared for the challenges of stopping the virus’ spread. The story was the same internationally where except for China, several Southeast Asian countries, Africa and a couple countries here and there, the virus was not contained. Deaths, recessions, lockdowns, and business closures followed the virus around the globe.

The response of global governments and healthcare companies which mobilized to combat the virus was impressive. Multiple vaccines have been developed, tested and are being rolled out in less than a year. At least a couple of these have efficacy rates greater than ninety percent. If the vaccines reach people on schedule, we should reach herd immunity in the United States at some point in the second half of the year. We hope that by vaccinating those at risk, the virus’ spread and fatalities will start declining sooner than that. Once fear dissipates and the number of people at risk falls, the economy should reopen, and life can normalize.

The economy rebounded strongly in the third quarter after a horrible decline in the first half of the year. There are some short-term economic risks as rising cases and fatalities have led to additional closures and curfews in the fourth quarter. The pick-up in employment and economic growth will likely slow in the next couple months. However, this is temporary and NPP is hopeful that the economy should expand nicely in the second half of 2021 and beyond.

The partisan disagreement in Congress and the country has been widening for decades. Is it possible that is coming to an end, or are the pockets of agreement only a temporary respite like the Emergency Economic Stabilization Act of 2008 reached during the financial crisis? We don’t know the answer to that question and only time will tell. We hope the hyper-partisan nature of political disagreement in this country has peaked. The looming Senate elections may point to the answer. A win by one of the Republican nominees means divided government. President-elect Biden has a reputation for reaching across the aisle and trying to forge pragmatic legislation.

NPP is not sure a Democratic sweep in Georgia will have broad-reaching market implications. A win would give the Democrats control of both the House and the Senate, but the margins would be razor-thin. It is likely the center-left faction of the party would still influence policy, but it would make the next two years a little more unpredictable. Either way, Treasury investors do not seem to care notwithstanding massive government deficits as far as the eye can see.

NPP was worried that there was a chance of negative GDP growth in 2020, but the recent rescue package has changed our mind. There will be a point in the future when the bill comes due for the massive budget deficits, but that time has not yet arrived.  For now, it is better for the economy and even the deficit that as few people and companies as possible go under as a result of the virus. Once the economy fully reopens, likely in the second half of next year, we expect robust economic growth as consumers flock to experiences such as movies, entertainment events, cruises, eating out at a restaurant, etc. that have been difficult to impossible because of COVID-19.

Consumer income and balance sheets have held up, in aggregate, remarkably well.  Employment has rebounded rapidly but consumers have been unable to spend, and the savings rate remains at a high level which bodes well for discretionary spending in the back half of 2021 and 2022 (see chart). Government stimulus has contributed to the skyrocketing savings rate. Many laid off workers have returned to work while government aid has assisted others. Unfortunately, there are many businesses that have closed or are at risk of closure. Additionally, while the savings rate has improved drastically there are many individuals and families who are still struggling. This is sad, but the average consumer has saved their income because there are not that many places to spend it. 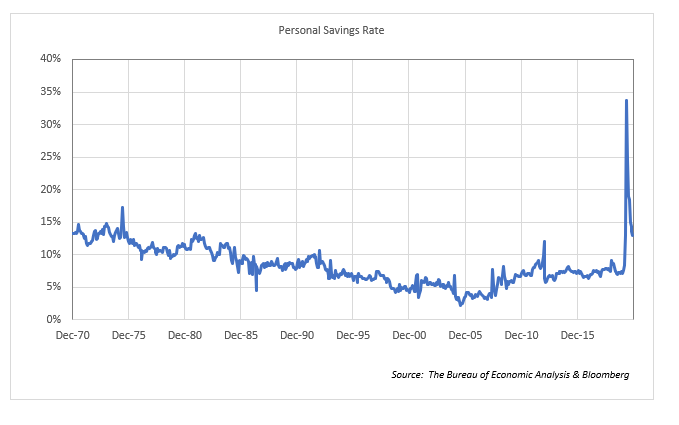 The banking system contributed to the global financial crisis of 2007 and 2008 and to the tepid economic recovery that followed. Many banks were undercapitalized at best or insolvent at worst. Now, the domestic banking system is well capitalized. The Federal Reserve announced on December 18th that large U.S. banks are positioned well enough to return more capital to shareholders. This is in stark contrast to 2008, when the Federal Reserve scrambled to raise capital for most large and small banks and several banks failed. It took years to recapitalize banks and this was a drag on economic growth. While the S&P 500 Financials Sector Index has lagged this year, it’s due to falling interest rates not insolvent balance sheets. With the year-end rally, financials have almost recovered to new highs. It took the Index more than twelve years to recover to its 2007 all-time high after the global financial crisis. Today, strong consumer finances coupled with a well-capitalized banking system should lead to a continuation of the robust recovery that has already begun. 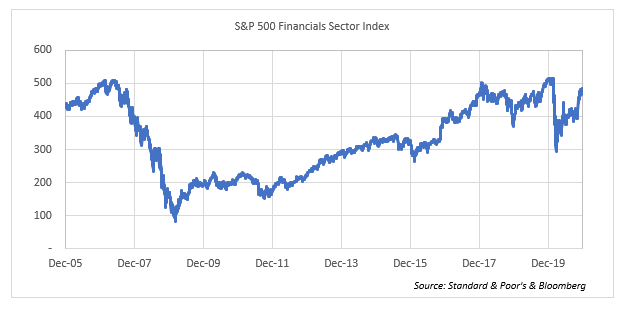 This is not to say that there aren’t risks. Part of the non-financial corporate sector has too much debt and some companies will certainly have to restructure their debts or eventually liquidate because of them. Municipal governments facing budget crises have laid off workers and that will remain an economic drag. States are unable to run unending deficits as opposed to the Federal Government. The biggest long-term risk would seem to be financial markets losing faith in the ability of the United States and other indebted developed countries to service their debts.  Fortunately, that doesn’t appear to be an immediate concern.

Transitioning to a Post-Pandemic World

COVID-19 unleashed a temporary economic and market crash unlike any we have previously seen. However, the recovery occurred just as fast as the economy shut down. But that still leaves the US economy well below peak GDP and peak employment. Equity markets experienced a V bottom and many broad equity indices are above pre-COVID highs. The recovering economy and resilient large-cap earnings certainly contributed to a favorable backdrop for equities. More importantly, collapsing interest rates and ample global liquidity created the impetus for money to rush into asset markets.

The bullish environment wasn’t specific to equities. Fixed income indices, precious metals and cryptocurrency all surged higher too. Long-term Treasury yields reached an all-time low while gold reached an all-time high. We believe investors will need to be more discerning in 2021.  Yes, energy stocks and many lockdown stocks fell sharply in 2020, but most broad indices rose. We think that will change in 2021 and people will have to focus on more company-specific factors. Not all lockdown stocks represent value, nor can you assume that all past winners will continue to shine in 2021. While the economy will normalize at some point, many work processes have been permanently altered and the work from home trend is now more acceptable.

We expect long-term interest rates to rise somewhat in 2021, but not enough to cause market valuations to be called into question. Nevertheless, it will be harder investors to make money in safer debt products in 2021. 2020 was a great year for investors in gold and silver. Lower interest rates, liquidity and a weaker dollar contributed to their strong performance. We do not think precious metals will match 2020, but they should remain a good portfolio diversifier and we still recommend owning them.

If someone complains about their daily routine to you in the future, just say 2020 and that should calm them down. Hopefully 2021 will be better, but that doesn’t mean it won’t have its own challenges. Valuations are full and rising interest rates should at some point lead to gradually declining earnings multiples. Robust economic and earnings growth should offset this drag and lead to single-digit gains in equities in 2021. NPP slightly favors emerging market equities over the S&P 500. They have underperformed for about a decade and Asia, in particular, should grow at a faster rate than the US. We also think emerging market relative valuations are attractive even after incorporating the higher volatilities of those markets. It’s likely that at some point in late 2021 markets will factor in reduced monetary ease. There is a risk that interest rates rise as a result. In addition, inflation could rise slightly if demand comes back faster than the supply chains can recover.  This would likely compress earnings multiples while temporarily hurting long-term fixed income investors.  Still, we expect volatility to be below 2020 levels as the economy normalizes. COVID-19 caused an economic and market freeze-up that is unlikely to recur this year. In sum, NPP expects lower returns and volatility in 2021 than 2020. But given the Federal Reserve’s aggressive monetary policy and the expected strong economic growth as the world recovers from the COVID crisis, NPP views any decline greater than 10% as a buying opportunity.