A Difficult Year for Financial Markets

2022 was a tough year for investors, and there were few places to hide. The chart below shows the total return paths of the S&P 500, investment-grade U.S. bonds and gold last year. Gold made a fourth-quarter comeback to finish the year flat, but stocks and bonds were hit hard in 2022. 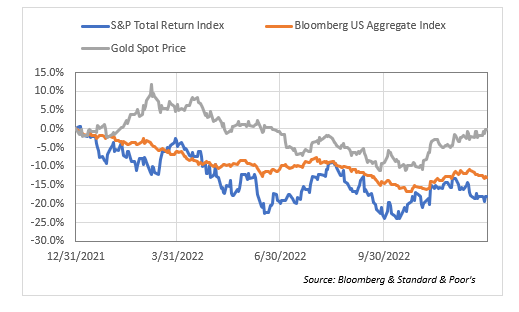 2022 was the worst year for equities since 2008. The S&P 500 fell 19.44% despite rising 7.08% in the fourth quarter. Energy was the only GICS sector out of eleven to increase for the year, although the utilities sector finished higher on a total return basis. The three worst performing sectors were communication services, consumer discretionary and information technology which all finished down more than twenty-eight percent. Market breadth improved in the fourth quarter, which is what you’d expect given the strong returns. The only two sectors that fell in the quarter were communication services and consumer discretionary. Communication services only fell 1.63%. The consumer discretionary sector fell 10.41%, but the losses were concentrated in the two largest companies at the start of the quarter by market capitalization – Amazon and Tesla. In fact, Amazon and Tesla were the only two discretionary stocks in the S&P 500 to fall more than ten percent during the quarter. Forty-six of the fifty-six stocks in the sector rose in the fourth quarter.

International stocks outperformed U.S. stocks in the quarter. The MSCI EAFE Index which measures developed market stocks was up 17.00% in the quarter despite European energy issues. Their 2022 performance of down 16.79% was better than the S&P 500. Emerging markets stocks also outperformed in the fourth quarter finishing up 9.20%, but still lagged U.S stocks in 2022. They ended the year down 22.37%. A major reason for the turn in international stocks was the peak in the U.S. Dollar. The Dollar Index rose 8.21% for 2022 as financial conditions tightened and U.S interest rates rapidly rose but fell 7.67% during the fourth quarter. The Federal Reserve has probably reached peak hawkishness, but that does not appear to be the case in Europe and Japan, and it is part of the reason for the dollar’s late year decline.

While 2022 was tough for equity investors, it was mixed in other financial markets. Bond investors were hit particularly hard on a risk-adjusted basis. The Bloomberg US Aggregate Index fell 13.01% in 2022, despite rising 1.87% for the quarter. 2022 was the worst calendar year for the index since its inception in 1973. Rising yields and credit spreads were an unfavorable combination for bond investors. Gold finished the year barely down after rising 9.84% in the quarter. The precious metal maintained its value last year even after experiencing a ten percent correction. Despite spiking prices in the first quarter after Russia invaded the Ukraine, oil prices only rose 6.71% during the year. Commodity prices were mixed, but the broad-based CRB BLS Commodity Index fell 0.92% in the quarter and 4.15% during the year. 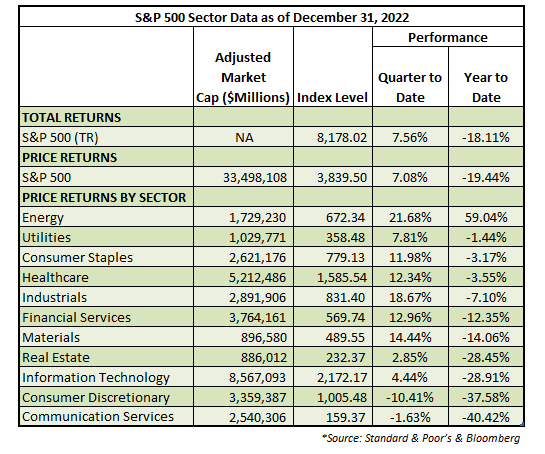 2022 started with the Federal Reserve believing inflation to be transitory, but by mid-year they moved toward forecasting it to be persistently high. The truth is probably somewhere in between. We are waiting for a new trend to assert itself now that COVID-19 has become something that we have learned to live with. NPP thinks inflation will average somewhere between two and three percent for the decade. This is higher than the post-GFC trend, but nowhere near the 1970s levels that people fear. We are already seeing evidence of waning inflationary pressures. Lumber and natural gas prices have collapsed, while housing, and automobile prices moderate. At some point in 2023, the dominant economic and political risk will shift from inflation to recession.

Most analysts and market participants believe a recession is likely in 2023. NPP sides with the consensus and believes a weak recession will occur in 2023. The Conference Board’s Leading Economic Indicators Index has fallen (see chart), M2 is falling, the yield curve is inverted, housing prices and sales are contracting, etc. There are many other indicators that indicate a heightened risk of recession this year. 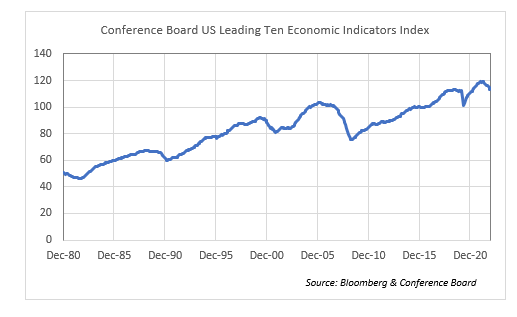 Despite the build-up of data points suggesting elevated recession risk, there is still a possibility one is avoided. M2 growth will be negative on a year-over-year basis for the first time in decades, but the absolute level and the three-year compounded growth rate is still high. Consumer net worth fell in 2022 but is still much higher than it was in 2019 and most consumers are employed. While continuing claims have risen, the weekly unemployment index and most other indicators still point to a strong, if slightly weaker job market.

NPP is not trying to imply that there are no signs of economic stress. Several sectors are already in recession. Higher interest rates and prices have led to declining housing starts, prices and purchases (see chart). Lumber prices and other industrial commodities have crashed as demand wanes. Used car prices were an early indicator of inflationary pressures but look to have peaked in January according to the Manheim Used Car Index. The demand for semiconductors continues to grow, but the industry is working through an oversupply and excess inventory of consumer electronics. While nominal retail sales continue to grow, many retailers have slashed prices to reduce excess inventory. Container freight prices have reversed out COVID excesses and are now close to their pre-COVID trend as supply chain issues have mostly evaporated. In sum, many parts of the economy have already experienced a decline or are going through a painful normalization. The economy in aggregate has displayed resilience despite the headwinds in these and other important industries. 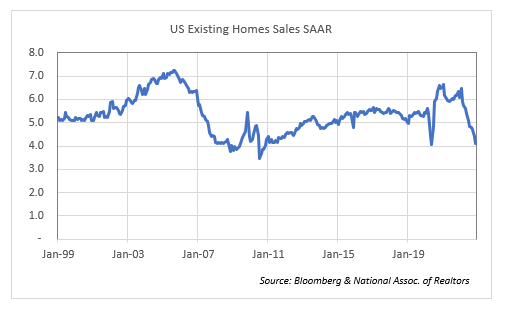 While NPP thinks a recession is likely, we do not think it will be long-lasting. There are not the obvious excesses that occurred prior to the GFC or during the tech bubble. We expect it will be akin to the early 1990s recession and expect the recovery to be quicker. The consumer is a little over two-thirds of the economy. The labor market remains strong and wage gains are solid yet slowing. Partially due to demographic trends, the labor market has been tight for several years. It is possible that employers are unwilling or unable to reduce their workforce due to structural issues. If employment holds up, the U.S. could narrowly avoid a recession while enduring subpar growth.

As is often the case during the first month of the quarter, corporate earnings reports should be a key driver of equity prices. Markets have transitioned from forecasting higher inflation for longer to predicting a recession. Unsurprisingly, earnings estimates are coming down and the resiliency of corporate profits is in doubt. Quarterly reports will be hugely important in determining equity market direction. S&P profit reports are likely to be fine in aggregate and should continue their historical trend of beating forecasts. The 2023 outlooks should be more important than backward-looking fourth quarter reports unless those reports are horrendous. NPP expects conservatism, but there are a couple rays of hope for investors. Part of the conservatism in guidance had to do with the strong dollar. The dollar has weakened significantly since the end of the third quarter. In October and November when most corporations reported their quarterly numbers, dollar strength was assumed. That did not happen, and dollar weakness will make foreign profits appear larger in translation.  Companies that reported in December experienced and forecast a smaller drag from the dollar than they had in September. The ICE U.S. Dollar Index fell 7.67% for the quarter and 9.28% from the September 27th high. NPP are neither dollar bulls nor bears. We believe the move higher in the first three quarters of 2022 was unsustainable in the intermediate term. It is tricky forecasting currencies, but we would expect the dollar to be less of a headwind moving forward and a relative help to earnings in 2023.

Profits are likely to hold up fairly well in a shallow recession or growth slowdown absent over-tightening from the Federal Reserve. If they do, the market is set up to rally once investors are convinced the floor is in for earnings. Several companies experienced post-COVID supply chain issues. They either had too much and/or too little inventory in addition to shipping costs that went through the roof. Supply chains and shipping costs are mostly normalized, while payroll costs are moderating.

There are other reasons why we are optimistic even though we believe a recession is coming. Based on survey data, most investors are forecasting a recession in 2023. We agree and expect it will be very mild. We do not see the obvious systemic excesses in the economy. Margin debt has fallen 31.2% from its October 2021 high according to FINRA. Defensive sectors have outperformed cyclicals ones. The market sold off in 2022 despite a recession that never occurred. Once the recession comes, it is at that point we think investors will start forecasting the imminent recovery and lower interest rates.

While 2022 was tough for equity investors, it was historically bad for bond investors. 2023 should be different. The starting yield is a good estimation of future returns for bond investors. Treasury buyers are now set up to comfortably beat inflation assuming it moderates. Future Fed rate hikes are probably already discounted in current yields. Investors in investment-grade credit are also likely to experience good returns. If the Federal Reserve overtightens, returns for high-quality bonds could be quite attractive in a declining rate environment.

There are two major risks that NPP sees. The first and most immediate risk is that the Federal Reserve overtightens (it may have already done so) to prove its inflation-fighting credentials. In doing so, it hurts employment and earnings and leads to the sell-off continuing in the first half of 2023. The second risk is that the Fed’s response to overtightening could potentially lead to inflation again. That is not a risk we dismiss, but it is a concern for 2024 or 2025, not 2023.

The consensus expects a mild recession in 2023. We agree but remain optimistic for long-term investors. Valuations are improved and a mild recession is at least partially discounted. While the economic news will likely deteriorate, that has probably been built into asset prices. 2023 is likely to be another volatile year. However, we expect more of that volatility to be to the upside. Value has been reestablished for bond investors and now is a good time for patient investors to buy. Equity investing is inherently risky, a fact 2022 emphasized. It may feel bad to buy when times are tough and investors are fearful, but that is usually when good long-term returns are generated. In equities, we have increased clients’ exposure to international stocks. We believe that the United States will remain the world’s leading economy for a while. However, after years of outperformance, diversification is wise at this point. 2023 will likely be choppy, but it should be a good year for investors.