The third quarter was another disappointing three months for investors with both equities and bonds declining. The S&P 500 fell 5.28% and is now down a little less than twenty-five percent through September. Meanwhile, the Bloomberg Aggregate Bond Index fell 4.75%. Midcap and small-cap stocks outperformed the S&P 500 and the Bloomberg Aggregate Index. The S&P Midcap 400 and the Russell 2000 fell 2.88% and 2.53%, respectively. International equity indices lagged the S&P 500, with the MSCI EAFE Index and MSCI Emerging Markets Index down 10.01% and12.48%, respectively. The previously mentioned equity indices are all down between twenty and thirty percent year-to-date. Consumer discretionary and energy were the only two of the eleven sectors to rise in the third quarter, while energy is the only sector up year-to-date.

Commodities buckled in the third quarter. Oil prices fell 24.84% and are now up only 5.69% through September 30th. Gold had exhibited resilience through the first half of 2022, but it fell 8.12% in the quarter and is now down 9.22% year-to-date. The broad-based CRB BLS Commodity Index was down 6.24% for the quarter and 3.26% for the year. Cash generated positive returns, but the yield paled compared to inflation. 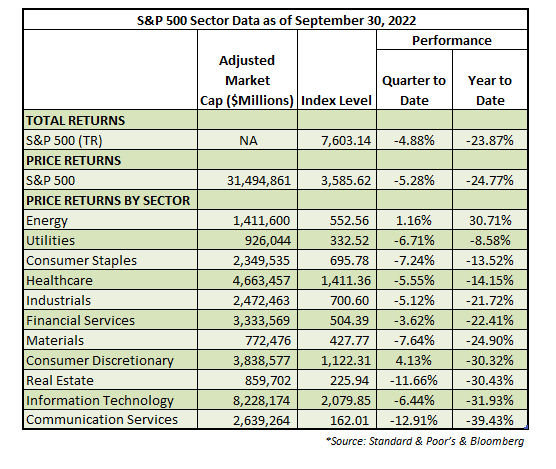 The Federal Reserve has already raised rates significantly and quantitative tightening is just beginning. The Powell Fed has not shown patience in letting its policies, which work with a lag, take effect. The Fed is trying to avoid a repeat of 1970s-style inflation, but NPP thinks it is inappropriate to compare now to the 1970s. The 1970s saw Nixon end the dollar’s peg to gold and a weak dollar followed. Today, the dollar is soaring higher. Then, geopolitical issues led to skyrocketing energy prices. Now, energy prices are higher, but the U.S. is a net exporter of oil and gas. Higher gasoline prices are terrible for lower and middle-class consumers, but it is not the systemic economic stress it was in the 1970s. NPP is concerned that strength in the dollar brought about by current Fed policy is contributing to global problems. This may ultimately be a greater issue than inflation if the Fed continues down their tight monetary policy path.

The Federal Reserve kept rates too low for too long and now they are concerned about their credibility. This could lead to another policy error and if anything, has shown that the Powell Fed, and maybe the institution itself needs to rethink how it conducts policy. The 1970s saw several inflationary bouts which coincided with spiking M2. M2 growth, which affects the economy with a lag, may end up being negative in 2022. We see this as the third major error in the last four years. The first one occurred when Powell overtightened in 2018 only to reverse policy quickly in 2019. The second one was the excessively easy monetary policy after COVID until full employment was reached. In sum, one of the material risks is that the economy will suffer more than necessary due to policy errors.

This isn’t to suggest that inflation is all a result of the Federal Reserve. Policy makers were overly generous once COVID-19 hit and the fiscal stimuli here and overseas along with Russian aggression in the Ukraine have contributed to rising inflationary pressures. Nevertheless, a real risk that NPP underestimated was that of the Federal Reserve compensating for excessively stimulative policies with overly restrictive policies. There is a possibility that the strong dollar is going to lead to an overseas crisis greater than what happened with the Bank of England’s recent intervention. When it does, we expect the Federal Reserve to pause and reverse policies. NPP hopes that in doing so, the Federal Reserve will be more measured and patient in the future. Maybe The Fed has learned a lesson and will not overstimulate but instead provide modest, not excessive, accommodations and wait for its actions to affect the economy.

The most recent CPI Index and core PCE Index reading came in hotter than expected. Service sector price gains accelerated in the month of August. Despite this, there is mounting evidence that inflationary pressures are falling or will soon fall. Important industrial commodities such as lumber and copper have seen their prices drop significantly. The cost of agricultural commodities has declined but this has not shown up in food prices yet. Housing prices and rents appear to have stabilized and are outright falling in many metropolitan areas although the government statistics still show gains. The government housing data tends to work with a lag. This should show up in the reported data later this year or in early 2023. Meanwhile, supply chains disruptions and costs have already peaked. The Shanghai Containerized Freight Index has fallen 62.4% from its January 7th high. 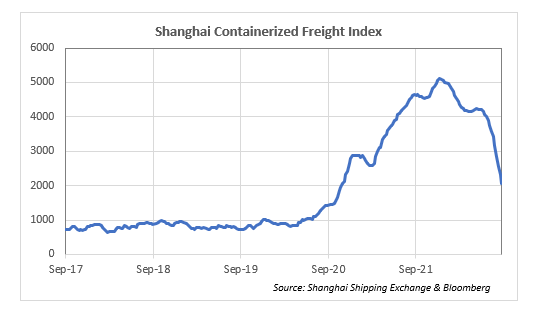 Used car prices peaked in January and have now dropped 12.9% from the January high according to the Manheim Used Car Index. The labor market remains remarkably strong, but wage gains are showing signs of moderation. Additionally, M2 growth is almost flat this year. A massive, unparalleled rise in M2 preceded accelerating inflation and NPP is hopeful that a flattening of M2 growth will lead to waning pricing pressures. While there are many promising signs that inflation is falling or will fall, we will have to wait and see if or when they show up in the government data.

The Bloomberg Aggregate Index declined 14.61% for the nine months ended September 30th. This represents the worst nine month start to the year in the history of the index. There has been nowhere to hide in the fixed income space. Cash has outperformed bonds materially. While the equity bear market has been severe, arguably greater damage has been caused by fixed income which is supposed to dampen portfolio volatility instead of exacerbating it. One measure of bond market volatility is the ICE BofA MOVE Index which measures volatility in the Treasury market. As you can see in the chart below, volatility is comparable to the worst days of the COVID crisis in March 2020. 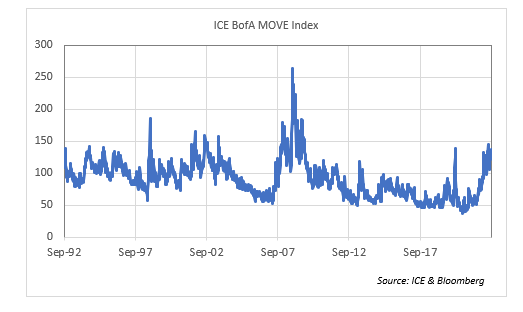 NPP thinks this is about to change. While short rates are due to rise at the next Fed meeting, the long end of the curve is not as affected by the Fed Funds rate. Tighter monetary policy usually leads to lower long-term interest rates once the policy reaches “neutral” or becomes restrictive. NPP believes the Federal Reserve is there or will be shortly.

We acknowledge that evidence of declining inflation is needed for fixed income or any asset class other than cash to work. Luckily, it does not require inflation to come down to the Fed’s two percent target to generate real returns from here in fixed income. Treasuries are yielding close to four percent, investment grade corporate bonds are yielding close to five and a half percent on average, while riskier credit is poised to deliver equity-like returns going forward. Things can get worse from here and may in the short-term. Investors would do well to remember that the best predictor of fixed income returns is the initial yield. Given current levels, patient investors should expect solid returns going forward.

A strong 3rd quarter rally into mid-August came to an end when Chair Powell reiterated the Fed’s hawkishness. Since then, equities continued their bearish pattern. Global stock markets are searching for a bottom but haven’t been able to locate one yet. Valuations are greatly improved from the beginning of the year, but now investors are concerned about earnings, a potential recession, and overtightening from the Federal Reserve. Earnings have been ok in aggregate, but several large companies have had issues with inventories and/or costs. Domestic demand has held up reasonably well so far. The possibility of a U.S. recession and the potential that the Fed could overtighten financial markets and break something are the other main concerns. The bad news is until that happens, downside risk may persist. The good news is we are probably close to that point as seen by the recent actions taken by the Bank of England. We are also entering a part of the year that is usually good for equity investors while oversold and with investor bearishness at high levels by many measures.

Inflation has been the main culprit for poor equity and bond performance so far in 2022. The Federal Reserve has reacted strongly to counteract it after adding fuel to the fire with zero interest rates and quantitative easing for way too long. Now we worry that it is not being patient enough to let its policies ripple through the economy. Nevertheless, NPP is more optimistic about fixed income and equities because we think we are close to the end of the rate hiking cycle and there are early signs that inflation is peaking.  Assuming leading indicators of disinflation are accurate, the end of this interest-rate hiking cycle should occur within the next two quarters. Additionally, valuations are greatly improved. Valuations are terrible timing tools, but they do a good job when projecting long-term returns. Numerous risks remain, but NPP thinks now is a good time to start adding to positions with an eye to the future.