Bear Market in Stocks and Bonds

Equity and fixed income markets continued falling in the second quarter of 2022. Equities officially entered a bear market while fixed income had the worst six-month start to the year in the history of the Bloomberg Aggregate Index. While gold and many commodities sold off, they held up much better than equity markets. Cash was the only major asset class to retain its nominal value during the quarter.

The S&P 500 Index fell 16.45% in the quarter and is now down 20.58% year-to-date. There was not a huge difference in the performance of small or mid-cap indices. Their losses approximated the losses of the S&P 500. Additionally, the MSCI EAFE and MSCI Emerging Markets Indices also dropped more than ten percent in the quarter. There was greater performance dispersion on a sector basis. Consumer Staples fell 5.23% but was the best performing sector in the quarter. The energy sector was the best performing sector in the first half of the year and the third best sector in the quarter, yet it fell 6.13% in the second quarter. Nevertheless, it is up an impressive 29.21% year-to-date and was the only one of eleven sectors to generate positive performance so far in 2022. Utilities, consumer staples, and healthcare held up relatively well, all falling less than ten percent through June 2022. Some of the prior bull market’s best performing sectors produced the worst results year-to-date. The consumer discretionary, communication services and information technology sectors all lost more than twenty-five percent through June 30th.

Fixed income markets continued to fall in the quarter and did not stabilize portfolios as they have done in most recent market corrections. Rates rose across the Treasury curve due to accelerating inflation data and the Federal Reserve raising rates. Credit spreads also rose as investors demanded higher yields for taking on additional risk.

Commodities held up well in the quarter, despite a strong dollar. The dollar rose 6.48% in the quarter and is now up 9.42% for the year. Gold fell 6.72% in the quarter and is now down 1.20% year-to-date. The small decline in gold relative to equities showed its value as a good portfolio diversifier in the first half of the year. The CRB BLS Commodity Index fell 5.95% but is still up 3.18% year-to-date. Oil was the star performer. Crude oil increased 5.46% and 40.62%, respectively, for the three months and six months ended June 30th. 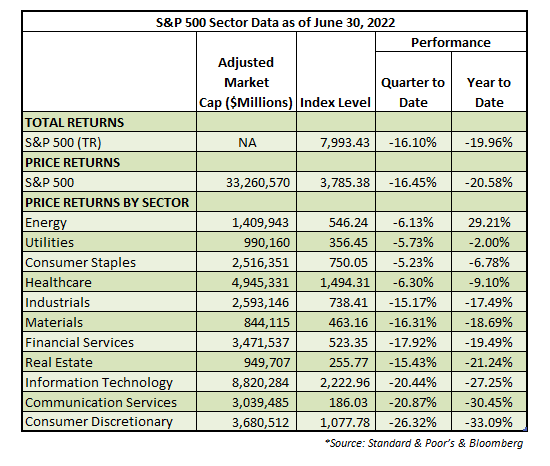 This has not been an easy couple of years for corporate management teams. They had to deal with a global pandemic that ground the global economy to a halt. Then the economy partially reopened only to be shut down again as COVID-19 waves swept across the globe. Service spending had kept American economic growth remarkably stable if low pre-COVID. With parts of the service economy locked down or shunned, consumers helped by government programs shifted their spending to goods in 2020 and 2021. The increased demand for goods, and shuttered economies led to massive supply chain bottlenecks that have yet to resolve. Just when companies had adjusted to the new reality, consumer habits changed in the first half of 2022. They shifted spending from goods to services. Several large and well-managed retailers were left with too much inventory. COVID-19 led to goods sales rising rapidly while service companies struggled. Now the reverse has happened, and many service companies can’t keep up with demand while some retailers have too much supply. The economy is trying to find a balance.

With that backdrop, it is not surprising that equities fell into a bear market in the first half of 2022. There are a multitude of factors contributing to the selloff. Multiples were elevated when the year started. Rising interest rates generally lead to lower multiples, and 2022 has not been an exception. Rising inflation has started to hit consumer spending and contributed to corporate margins falling a bit from high levels.

The strong dollar has hurt earnings which has in turn contributed to the selloff. Several large multi-national companies stated that the dollar’s strength led to lower-than-expected revenue growth. This included stalwarts such as Microsoft, Oracle, and Nike.

Despite the headwinds, earning continue to grow. It is a near certainty that earnings growth will slow in aggregate if not fall at some point in 2022 or 2023. The issue is how much will they fall if at all. Most investors are currently betting that earnings will not hold up and fall materially. We disagree that the drop in earnings will be severe. Margins are compressing but should level out at healthy levels. Nominal spending has slowed but has held up well even if the spending mix has shifted several times and consumers are now spending more on energy and food. Once earnings stabilize, the chance that equities are done falling rises appreciably. Additionally, valuations are reasonable and investor sentiment is poor. A V bottom such as the 2020 one is unlikely. Evidence that earnings are holding up better than feared will not occur immediately. Stronger earnings and better forecasts are necessary, but it will take time before executives are willing to forecast improvement or for investors to become comfortable that earnings revisions have stopped falling. Better corporate reports will need to be accompanied by lower inflation and a sign that interest rates have topped. Markets should remain volatile, and we are not convinced the ultimate bottom has been made. Nevertheless, we do think there are buying opportunities and believe that now is a good entry point for those that do not have a short-term focus.

The interest rates on fixed income securities should rise if inflation remains a problem. Long-term Treasury rates discount the future. As their rapid runup anticipated the need for the Federal Reserve to raise rates, the recent decline in longer-term Treasury yields may be forecasting a drop in inflation. Global PMIs are falling while consumer confidence wanes. Lumber prices have collapsed along with housing affordability. Consumers are adjusting their behavior due to higher gas prices. They are reducing miles driven and planning fewer trips. These and other indicators point to a slowing economy. It has only recently started to show up in the inflation data. At the very least, Treasuries are indicating that inflation is likely to move to much lower levels from the current rate.

Corporate credit spreads are increasing, but signs of stress are not yet flashing danger. Defaults remain historically low, although that could change if the economy heads into a recession. Spreads for riskier debt have risen and the trends must be watched. Like the equity market, the credit market needs to see inflation coming down and believe that a soft landing or weak recession is likely before spreads top out. We believe that a clear sign that interest rates have peaked coupled with stabilizing spreads are needed for equity markets to find a floor. NPP thinks there is an above average chance that long-term Treasury rates have already hit their highs for the year. We are not as certain about spreads but are confident that the recent widening has led to attractive opportunities for patient investors. We have been adding duration in fixed income. We think there are plenty of opportunities for investors in investment-grade debt after the spike in yields.

There is a chance we are in a recession now, although it would not be a typical one. Employment is still increasing, but that is often a lagging indicator. There are approximately two job openings per job seeker according to the Bureau of Labor and Statistics. Pre-Covid, the level was close to one. Layoff announcements seem to be increasing but are not showing up in the JOLTS data or in continuing claims data. What constitutes the start and end of a recession is somewhat arbitrary. Frequently, the official beginning is not called until well after the recession has started. Economic risks are now elevated, and the economy has already slowed after growing rapidly in 2021. Real spending has softened, and business, consumer, and investor confidence have dropped. That can change in an instant as we have seen this year. Our best guess is that we have not yet entered a recession but are at risk of doing so.

The main issue is how bad will the contraction be if it comes/is here. We do not think a recession would be deep because the U.S. financial system remains resilient. There have been trillions in losses in bonds. Crypto has collapsed this year and caused an estimated two trillion dollars in losses on top of the losses in equities. However, there are no obvious signs of banking system stress. This is contrary to 2008 when falling home prices caused an over-leveraged financial system to collapse.

While we think the financial system is strong, inflation is pernicious and if it isn’t tamed, a recession is inevitable. Here we are cautiously optimistic that post-COVID normalization and more restrictive global monetary policy will reduce some, but not all the inflationary pressures. The PCE deflator looks to have peaked. The recent monthly reading for May came in slightly below expectations. The year-over-year rate now stands at about 4.7% after peaking around 5.3% in February. The recent trend is showing inflationary pressures abating although still elevated compared to history. 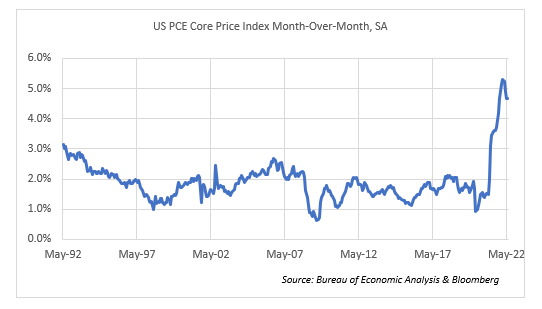 As we mentioned, we do not think that the weakened economy is in recession, although barely positive real GDP growth with high inflation may not feel much better than GDP growth of negative one percent and high inflation. The economy is struggling, but a reduction in employment is needed to tip the economy into recession and the labor markets aren’t there yet. Nevertheless, the economy is much weaker than it has been since emerging from the COVID-19 recession and the risks are elevated of moving into one.

Twelve Month Returns Should be Better, Volatility to Remain

We believe the most important factor affecting returns for the second half of 2022 is inflation. It is too high and must come down. If it does, and we think it will, prospective returns in equities and fixed income look attractive. If it doesn’t, there is more pain to come for investors. We think that inflationary pressures have peaked and are starting to slow. Not every inflation data point will be positive, but it should become apparent to market participants at some point in the second half of 2022 that inflation is easing. We have high conviction that Treasury yields have reached their 2022 peak. If so, lower, or range-bound yields should help establish a bottom for equity markets once investors become comfortable that yields have topped. NPP is not certain that equity markets are done falling, but we believe that it is a good buying opportunity.