The second quarter saw strong equity gains in the United States and overseas. The S&P 500 rose 8.17% and is now up an impressive 14.41% through the first half of 2021. The small and mid-capitalization stocks rose less than the S&P 500 in the quarter, but the Russell 2000 and S&P Midcap 400 are up 17.00% and 16.89%, respectively, year-to-date. Technology stocks and communication services stocks resumed a leadership role, up 11.30% and 10.48%, respectively, for the quarter, but the best performing sector in the second quarter was real estate. The gains were broad-based, and utilities were the only sector that declined during the quarter. Nine of the eleven sectors gained at least ten percent on a total return basis through the first half of the year.

Bond investors did well in the second quarter after a very tough first quarter. The Bloomberg Barclays Aggregate Index rose 1.83% in the quarter and is now down 1.60% for the year. It benefited from declining Treasury yields and tightened credit spreads. Intermediate and longer dated Treasury yields declined giving back part of the rise during the first quarter.

Commodities also did well in the second quarter, although cracks started to appear in the commodity bull market. Gold gained 3.65% while oil rose 24.19% for the quarter. The CRB BLS Commodity Index rallied 9.73%, prodded higher by its large weighting in energy. Sometimes focusing on quarterly performance disguises the underlying story and that was certainly true for some commodities in the second quarter. The price of lumber is now down 17.99% for the year and 29.05% for the quarter. That understates the magnitude of the crash in the price of lumber as it fell 57.53% from its May 7th closing high. 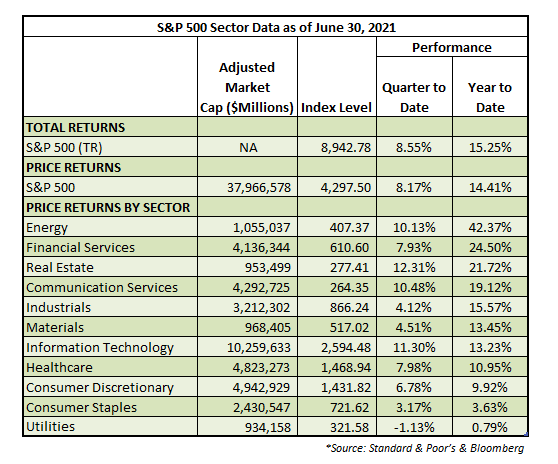 The excess global liquidity has been an important contributor to asset market performance and has likely pulled equity returns forward. However, not all the gains are ephemeral and due solely to easy monetary policy. The corporate sector adjusted their cost structures during the pandemic. Working from home, technology investments and business model adjustments have led to profit margin expansion for many companies. When the global economy fully reopens, slimmed-down corporations will be ready to profit from it. The profits recession was one of the briefest on record. As things now stand, the S&P 500 Index’s profits in 2022 are forecasted to be more than 20% above peak profits pre-COVID. As a comparison, the S&P 500 didn’t return to its 2006 peak profits level until 2011 and it wasn’t until 2013 that annual profits exceeded the prior peak by more than ten percent. It is a remarkable accomplishment and if the increase in profits holds it will help justify current valuations along with low interest rates.

Fixed income rallied in the second quarter.  Yields fell across the curve after a rapid rise in the first quarter. The US Bloomberg Barclays Aggregate Index recovered a little more than half of its first quarter loss and finished up 1.83% for the second quarter. Market expectations for inflation fell as market participants began to scale back future price level increases in aggregate. Inflation expectations are still modestly above the Federal Reserve’s two percent goal, but they have backed off from prior highs. NPP does not expect inflation to skyrocket, but we do believe it will be slightly higher than it was in the past decade. Demographics, higher debt levels, and recent productivity growth are disinflationary forces that are offset by the inflationary impulses caused by supply chain disruptions and liquidity conditions.

It isn’t a certainty that inflation is around the corner. Even if it rises, bonds should do okay in an environment where inflation moves up from its sub-2% trend to a little bit above 2% which is the most likely outcome in our opinion. The yield curve is currently steep, especially if you look at bonds maturing in approximately three to seven years. When the yield curve is steep, duration risk comes out of each bond as it approaches maturity. Additionally, bonds other than Treasuries pay higher coupons to compensate for credit risk. Generally, these companies should do better if inflation creeps modestly higher. They can lever growing nominal revenues and profits over a cost base that is relatively fixed.

We own some long-term bonds to hedge against the deflation risk that still exists. We emphasize Treasuries or high-quality municipal bonds or funds on the long end of the curve. That is not a place to take credit risk. Moreover, one of the reasons to have high-quality bonds with long durations is to hedge against equity risks. With lower coupons and higher durations, the percentage of a portfolio needed to be held in high-quality bonds to hedge a move lower in economic activity and equities is diminished.

Commodity prices have skyrocketed as reopening, massive liquidity, supply chain issues and speculation combined to push up demand. This has bled into prices in parts of the economy. A key question with implications for the economy, and financial assets is whether this is persistent or transitory. We think it is transitory for most commodities. There are certain exceptions such as metals that are levered to the global growth in electric vehicles. However, we have seen in the past that rapidly rising commodity prices following a recession can reverse. This shows up notably in housing sales where a rapid rise in lumber costs and housing prices has led to a drop in sales and lumber prices. Lumber has fallen by more than 57.53% from its daily closing price after quadrupling off its December 2019 close (see chart). Additionally, wheat prices have fallen 13.19% and soybean prices declined 12.68% from their highs. COVID has wreaked havoc with supply chains, but this shall pass and before supply chains fully adjust, speculators will likely reduce their positions. Additionally, the normalization process should occur before or as the Federal Reserve goes from being extraordinarily accommodative to slightly less so. 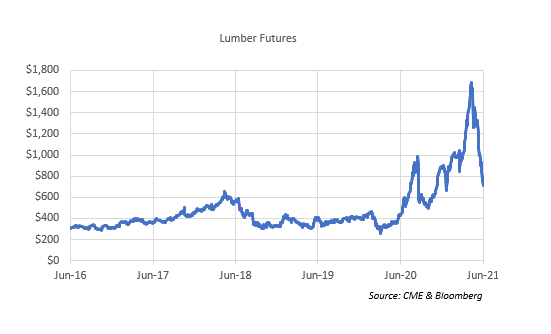 Neutral for the Second Half of the Year

The first half of the year was excellent for stocks with double-digit returns for most broad equity indices. Fixed income was a slight drag due to an increase in interest rates. Commodity prices increased but some have started to pull back recently as the air comes out of the inflation and reopening trades. We are not making major adjustments to portfolios. While our expectations for forward returns have fallen due to the strong first half returns, we do not see a recession on the horizon and do not see the impetus for a severe bear market. Focusing on high-quality companies and investments remains key. Now is a good time for investors to assess what to do, but NPP does not think major portfolio moves are needed.