The first quarter of 2022 saw volatility increase in equity and fixed income markets. The S&P 500 experienced its first double-digit decline since the crash of early 2020 on a closing basis. The fixed income markets performed poorly as well.  Bond yields soared and returns soured. Commodities were one of the few bright spots. They experienced positive returns across the board.

Energy followed up an excellent 2021 with continued strong performance. It rose an impressive 37.66% following commodity prices higher. The only other sector to finish up for the quarter was the utility sector. Only four out of eleven sectors lagged the market, but three of them were heavily weighted sectors: communication services, consumer discretionary, and information technology. These three sectors were market leaders over the past decade. It bears watching whether a regime change has occurred, or if this is a pause in trend.

The equity market correction made headlines, but arguably the most significant market action took place in the fixed income markets.  Fixed income indices experienced poor returns and ended up lagging equities during the quarter. The Bloomberg Aggregate Index fell 5.93% for the quarter, while the Bloomberg Intermediate US Government/Credit Index fell 4.51%. Fixed income investors had very few places to hide. The first quarter was the worst quarter for bond investors in over forty years. 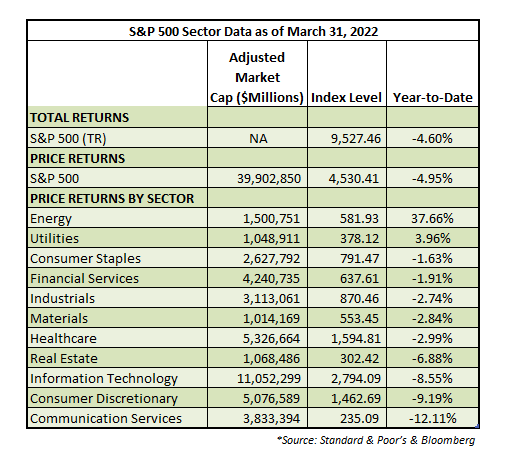 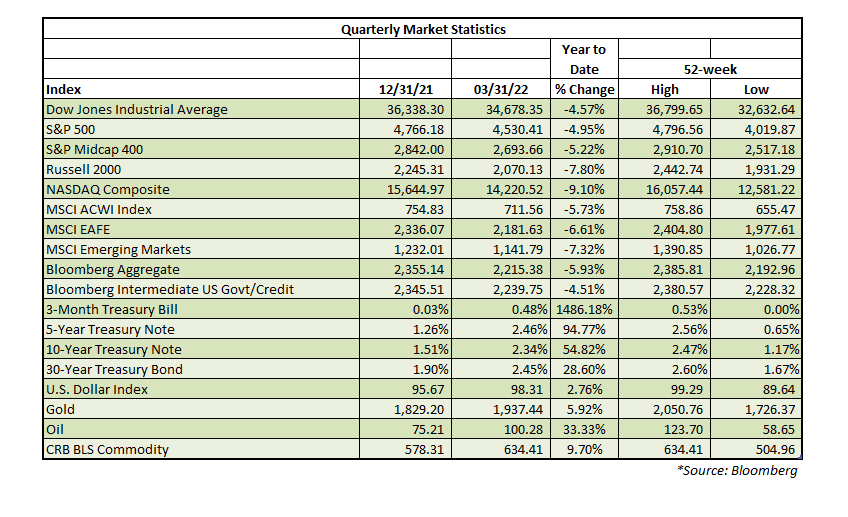 The Federal Reserve raised the Federal Funds rate from a range of 0-0.25% to 0.25-0.50% on March 17th. After nearly two years of keeping rates near zero due to the COVID-19 pandemic, the Federal Funds rate and associated short rates are set to rise. Markets currently expect the rate to reach a little less than two and a half percent by the end of 2022 according to Bloomberg. This is near where rates peaked in December 2018 during the last rate-hike cycle. The range of outcomes are diverse. Some experts think interest rates will need to exceed the current inflation rate to reduce inflationary pressures after rapid monetary growth, easy fiscal policy, and historically tight labor markets. Other strategists believe that high global debt levels, deteriorating demographics, and higher rates will contribute to a rapid economic slowdown and drop in inflation. Falling government stimulus and improving supply chains are also cited as factors contributing to a reduction in inflation. NPP leans toward the latter scenario but needs to see more data before having a high degree of confidence this is correct. Regardless of who is right about where interest rates will peak, short-term rates are headed higher quickly.

Long-term interest rates have already moved up significantly anticipating higher short-term rates, but also due to higher inflation and rapid economic growth.  The yield on the Five-Year Treasury Note rose 1.20%, almost doubling its yield from the end of 2021.  The Bloomberg Aggregate US Bond Index fell 5.93% in the quarter. Looking at data going back to 1976, the Index has only experienced worse quarterly returns twice (see chart). The index lost 8.71% and 6.56%, respectively, in the first and third quarters of 1980. However, the index rose 18.78% in the second quarter of 1980 which generated a positive nine-month total return of 1.32%. The first quarter returns for fixed income investors were historically bad. Cash, with its near-zero yields, far outpaced fixed income returns. 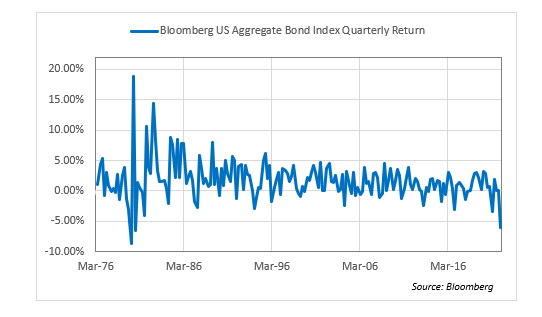 The moves in the rest of the developed world were not as significant but were in some ways more dramatic. Japan and many countries in developed Europe had massive amounts of negative-yielding debt. This peaked above eighteen trillion dollars in June of last year before ending 2021 above eleven trillion. NPP and many others believe that negative interest rates are terrible for economies for a variety of reasons. If nothing else, they are a symptom of economic malaise. The amount of negative-yielding debt fell dramatically in the first quarter of 2022 and was slightly less than three trillion dollars on March 31st as global interest rates rose due to continued inflationary pressures. 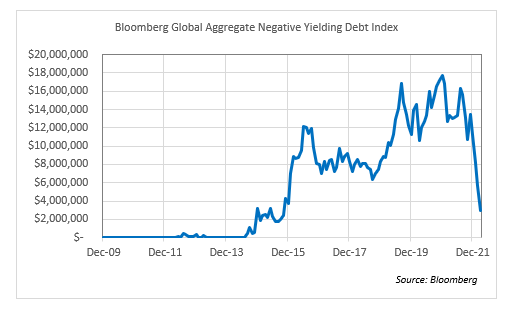 To sum up, rates are probably not done going up, but the rate of ascent should moderate. This could be a good long-term entry point for bond investors if inflation does indeed cool off later in the year.

Equities Recover Part of Their Losses After Correction

The S&P 500 experienced its first ten-percent correction since COVID caused a market crash in 2020. It fell slightly more than thirteen percent on a closing basis from January 3rd to March 8th as worries about rate increases and the war in the Ukraine weighed on investor sentiment. The S&P 500 then rebounded quickly to end the quarter down 4.95%. Equity markets rallied as fears of Russia conquering the entirety of the Ukraine waned. At least in the short-term, markets became oversold and rallied. Earnings should be key moving forward. Estimates for growth in 2022 and 2023 are still high. The Federal Reserve is intent on lowering inflation. Lowered inflation almost assuredly must be accompanied by slower growth which means the current earnings estimates are optimistic in aggregate. The quick snapback has left markets vulnerable to earnings disappointments later in the year. This does not mean that the market must fall precipitously, but it does mean that returns are likely capped unless 2022 earnings surprise on the upside and inflation moderates. We think we are looking at a range-bound market with a slight bias higher. Fundamentals are still solid, but current valuations suggest forward returns in the single digits.

While bonds experienced a historically bad quarter and equity investors lost money even after a late quarter rally, commodities generated strong returns. The CRB BLS Commodity Index jumped 9.70% in the quarter and is now up 82.54% from its April 27, 2020 low. Supply chain constraints, rising demand, geopolitics and speculation all contributed to a phenomenal quarter for commodity investors. It remains to be seen what will happen if some of these issues reverse or stabilize.

Supply chains were showing signs of improvement before the war in the Ukraine and China’s recent lockdowns due to COVID-19. Demand for housing appears to be moderating due to elevated prices while many recent consumer surveys show a drop in confidence levels. The old saying that the best cure for high prices is high prices should still work if supply chains improve. Stretched supply chains have loosened a bit and there are incipient signs that inflationary pressures are easing. While NPP thinks this is the case, it does not mean everything is better or that there aren’t still risks. Until inventories are rebuilt, shipping lanes normalize, and more resiliency is built into the system, any additional shock could push commodities higher.

NPP expects volatility to moderate from first quarter highs. Nevertheless, 2022 will remain a more difficult year for investors than 2021 was. We expect the S&P 500 to generate positive returns over the rest of the year, but do not expect that those returns will be linear. Stocks will remain relatively volatile as strong corporate fundamentals mix with a more difficult macro environment. We expect solid earnings growth and multiple compression as interest rates move slightly higher throughout 2022. Interest rates should grind higher on the long-end, but the risk is now two-sided after the rapid first-quarter move. The Federal Reserve will likely raise rates several times, but that is priced into the Treasury curve. Precious metal ETFs remain a good diversifier for equity and fixed income portfolios. The current backdrop calls for holding more cash and cash equivalents. The investing backdrop is more difficult than it has been since the initial COVID-19 panic ended. Markets will need to digest additional rate hikes and economic crosscurrents, but patient investors should be rewarded.