As most people know by now, GameStop shares experienced a meteoric rise in January before crashing back to earth. Retail “investors” on a Reddit message board tried to initiate a short squeeze on the heavily shorted stock. At the peak, more shares were sold short than were outstanding on the struggling video-game retailer. Traders hoped to make money by forcing the shorts to cover their position, or so the story goes. NPP doubts that only retail investors were squeezing the stock higher. The volume was massive, and we suspect that hedge funds and other institutional investors piled into the stock expecting to make money as the shorts were forced to cover. GameStop has about 70 million shares outstanding.  Ten million or so shares sold short were covered in the prior two-week period before the short squeeze effort really took hold. A little more than forty million shares were covered in the two-week period ending January 29th. 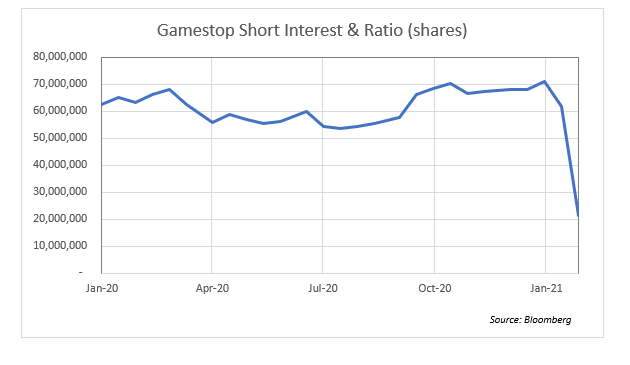 The GameStop saga captured the public’s attention and led to calls for new regulations by some. Equity markets fell quickly as GameStop and a couple other stocks popular on Reddit message boards soared. Almost as quickly as GameStop, etc. rose and the market pulled back, the trade reversed. Robinhood announced limits or a temporary cessation on new positions and the short squeeze crowd quickly backed off. The reason for the investment limits on Robinhood was simple, the company needed to raise additional capital reserves to cover the increased risk associated with larger account balances, higher volatility, and an influx of users.

NPP’s opinion based on current reporting is that the risk to retail investors is likely overdone. Many GameStop traders knew that the company was in trouble and richly priced based on current fundamentals. Other people jumped in because they wanted to make a quick buck and had too much time on their hands. Regulators have not tried to shut down poor performing hedge funds, so why should they ban what may have been foolish trading by the retail crowd? The GME efforts were probably exacerbated by boredom, easy money, and stimulus checks and NPP does not think it shows that a major regulatory overhaul is necessary.

This is not the first short squeeze in history, and it won’t be the last. NPP doesn’t think it was the strangest one of the twenty-first century. NPP thinks the successful short squeeze of Volkswagen stock in October 2008 during the depths of the Great Recession was more remarkable. While the S&P 500 was crashing, hedge funds and institutional investors attacked Volkswagen shorts causing the stock to rise five-fold in a little over a month before reversing out all its gains in less than a year. In fact, Volkswagen’s stock currently trades below where it was before the squeeze was initiated over twelve years ago (see chart). 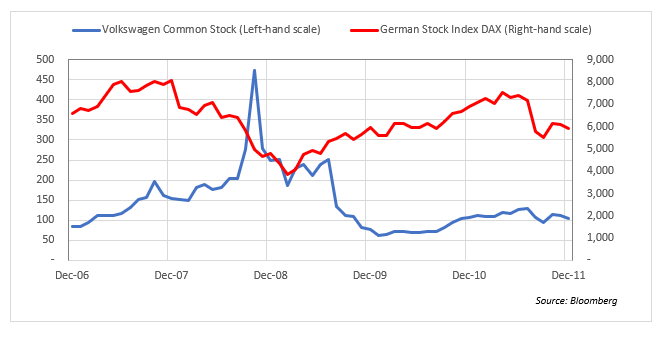 In a year where being long usually meant losing money, traders successfully forced shorts to cover their positions at a large loss to remain solvent. Our point is that speculation is not a new occurrence, and behavior that appears irrational to many is a frequent occurrence in markets.

Nevertheless, minor market tweaks may be needed and now would be a good time for regulators to reexamine market structure before an accident occurs. It may turn out that everything was fine, and markets worked how they should. Alternatively, regulators may discover that more disclosure is required regarding short interest and more capital is needed to hold short positions in heavily shorted names, or there may be some other deficiency. There has been massive growth in fintech products. We do not want to stifle the sector’s growth nor put a crimp on product innovation. Additionally, the advent of “zero-cost” trading has led to a change in order-flow management. Regulators will want to consider additional disclosures. At present, NPP does not think that major changes are required but given the improvement in technology and the rise of fintech, a reexamination of the regulatory framework that was partially created before PCs were invented is probably in order.