The hope was that 2021 would be the year that allowed people to return to normalcy. That didn’t happen, but the economy did boom, as vaccinations accelerated. Easy fiscal and monetary policy put in place in 2020 continued in 2021 and that stimulus was a big driver of growth and employment. Unfortunately, the Delta and Omicron waves prevented a linear recovery. The year also saw inflation accelerate in part due to labor and supply shortages. In response to the rise in inflation, a relative tightening of monetary policies started near the end of the year. The Federal Reserve tapered its bond-buying programs with an eye toward raising interest rates and potentially reducing the balance sheet in 2022.

The S&P 500 powered through all worries to finish the year 26.89% higher. It outperformed most broad-based equity indices in 2021. Smaller and mid-cap U.S. indices lagged the S&P 500, although the S&P Midcap 400 & Russell 2000 still rose 23.21% and 13.70%, respectively. The returns were not as good internationally. The MSCI EAFE index rose a relatively modest 8.78%, while the MSCI Emerging Markets Index fell 4.59% due to low vaccination rates and problems with Chinese equities. Additionally, the Chinese and other Asian economies suffered as rolling lockdowns occurred throughout the year impeding economic activity.

Commodities did very well in 2021. The CRB BLS Commodity Index rose 30.31%. Ample liquidity, supply shortages and speculation all contributed to their strong performance. Oil prices rose 55.01% as economies recovered, and energy demand rose. On the other hand, precious metals prices lagged commodity and energy prices after materially outperforming them in 2020.

Investment-grade bonds were losers in 2021, although their losses were not large. The Bloomberg Aggregate Index fell 1.54% for the year as bond yields rose across the board. The yields on Treasury Securities maturing between two to ten years rose between 0.6% and 0.9%. Investment-grade corporate bonds did a little bit better. The best performing parts of the bond market included Treasury Inflation-Protected Securities (“TIPS”) and non-investment grade credit. TIPS benefited from inflation coming in above expectations, while non-investment grade credit benefited from improving corporate profits and shorter durations. 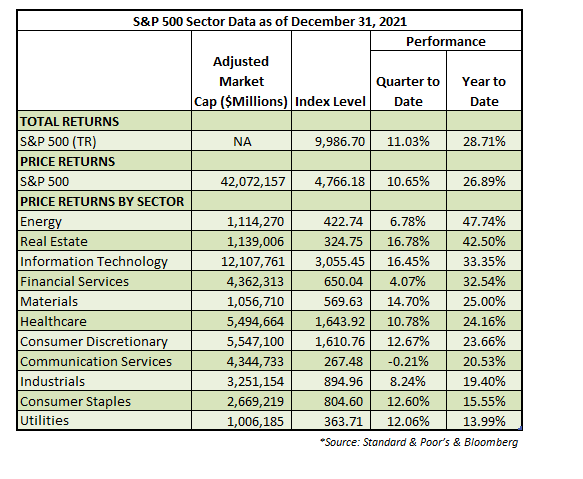 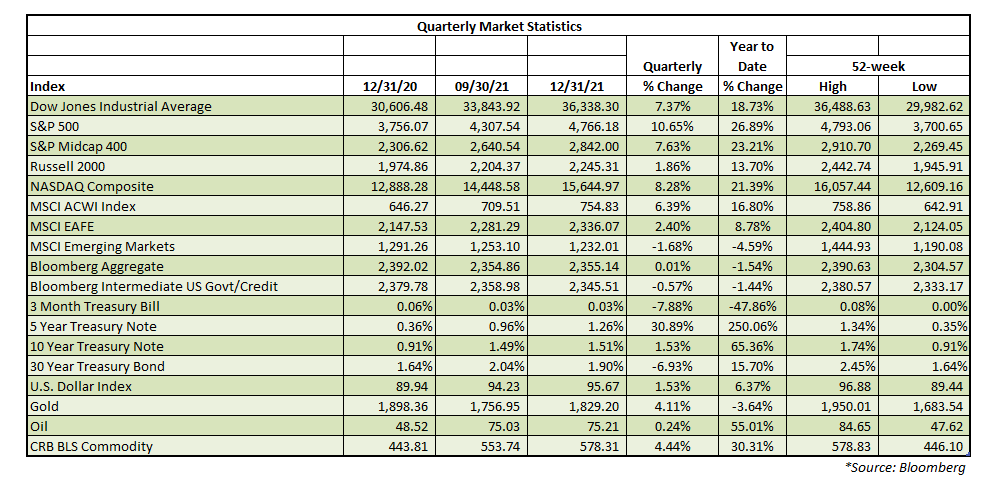 Waiting for the Pandemic to End

We are still waiting to arrive in a post-pandemic world. Hopefully Omicron will usher that in, but we won’t know until we get there. Preliminary data suggests that the Omicron variant is more contagious, but less severe. The Omicron mutation arose in South Africa where deaths have been less, and hospital stays shorter than the Delta variant. However, that does not mean that they will be reduced elsewhere. South Africa was hit severely by the Delta wave and has a younger population. We won’t know if Omicron is the end of the pandemic stage of COVID-19 until we see deaths and hospitalizations stay permanently low and manageable.  This probably won’t be known for at least a couple more weeks.  In the meantime, some hospitals are starting to fill up again and some healthcare systems are stretched.

We are now more than two years from when COVID-19 was identified in China and almost two years from when the first wave initially hit the United States. Since then, more than five million people have died from COVID-19 globally. Economies have drastically changed since the onset of COVID-19. Many people were forced to work from home to prevent community spread while others lost their jobs.

Deaths are still uncomfortably high with the seven-day average death total in the United States at 1,100 a day according to the CDC, but they are heavily concentrated in the unvaccinated portion of the population. Whether or not we have entered the endemic phase depends on your criteria. If it is total deaths, we are not there yet. If it is minimizing deaths and serious sickness for those who are vaccinated, we are close to the end of the pandemic in the United States. COVID-19 is not going to go away, but with shots and therapeutics, it should be very manageable.

The strains caused by COVID-19 have led to worker shortages, supply chain delays and shortages, and higher inflation. Easy fiscal and monetary policy helped stabilize the economy while allowing it to recover quickly from a brief but severe recession. Many of the supply chain strains should reverse in time. The pandemic accelerated certain stresses that were percolating under the surface. The issues that will be answered as 2022 unfolds is what problems are temporary economic distortions caused by COVID-19 and which ones will remain and were brought forward by the virus.

The labor market was extremely tight before COVID-19 hit. The unemployment rate of 3.6% on September 2019 was a level not reached in half a century. Now worker shortages are pervasive throughout the economy. Workers are demanding and receiving significant wage hikes. Many companies are offering signing and retention bonuses to hire and retain workers. Some of this is likely due to transitory reasons including health fears, but other factors may be permanent. The United States’ population has been aging as Baby Boomers approach or reach retirement age. Lower birthrates and immigration levels have contributed too. The labor force participation rate hit a multi-decade low in 2020 before recovering slightly. 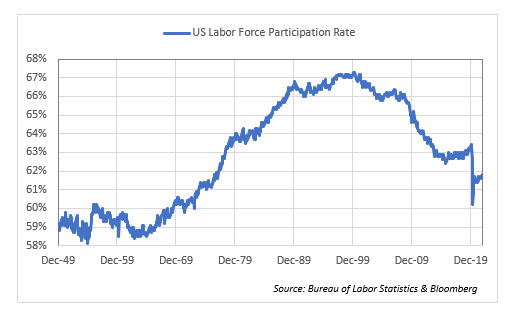 Some of the decline in labor force participation is assuredly due to the pandemic. However, some of it is secular and a result of a gradually aging society. The participation rate had been in a downtrend starting in 1999 before stabilizing in 2015. Our guess is that the participation rate will move higher from here but will stabilize below pre-pandemic levels. The answer to this question will help determine how tight the labor force really is, the risks of a wage-price spiral, and how many times the Federal Reserve will have to raise rates in this tightening cycle.

Global supply chains remain backed up. Cargo ships are accumulating outside of West Coast ports and many goods have long delays. The trucking sector is short workers, a trend that has been exacerbated by COVID-19. Auto production is increasing, but car availability is still low thanks to a lack of semiconductors. This has led to used car prices increasing by almost fifty percent according to the Manheim Used Vehicle Index in 2021. This is unsustainable and bound to reverse at some point. Lumber prices quadrupled from pre-COVID levels before reversing almost all their gains in 2021 before nearly tripling again. For much of 2020 and 2021, consumers were diverting expenditures from services to goods. These are just some of the stresses affecting the economy. All of this has led to a rise in the Consumer Price Index that has not been seen since the early 1980s.

The pandemic is not the only cause of rising prices. Easy fiscal and monetary policies have contributed to inflationary pressures. Some of these pressures will alleviate as the Federal Reserve tightens monetary policy. Additionally, government deficits should fall in the United States as the emergency Covid relief spending ebbs. Still, monetary and fiscal policy will remain accommodative even with rising interest rates and lower budget deficits. Interest rates are way below inflation and will likely remain lower than inflation for the entirety of 2022. Fiscal and monetary policy changes should cause a decrease in the rate of inflation, but it does not look like they will become restrictive enough in 2022 to cause a recession or deflation.

The economy is unbalanced right now. It is starting to normalize but will look differently after COVID-19 moves from the pandemic stage to the endemic stage. Emergency level policies are going away, but some of the consequences may not. It will take a while before we know what the economy will look like in the post-pandemic world. The interplay of these factors will affect inflation, interest rates and global growth and will be fascinating to watch. They will be a key determinant of capital markets in 2022 and beyond.

2021 was a great year for U.S. stocks despite elevated inflation. U.S. equity markets produced double-digit returns despite accelerating inflation which saw the CRB BLS Commodity Index rise more than equities. The S&P 500 rose 26.89%, but it’s earnings multiple fell because earnings are expected to rise over fifty percent according to Bloomberg once fourth quarter reports are released. Traditional fixed income indices fell between one and two percent for the year, although fixed income lagged inflation significantly. Credit outperformed traditional fixed income while precious metals fell despite the high inflation readings.

A frequent investor concern is that higher inflation will lead to lower multiples and equity prices. This fear is warranted based on history. However, it is not inflation that leads to lower equity prices. Higher inflation initially leads to rapidly growing nominal earnings which offsets the losses from multiple compression. What causes multiple compression and lower equity prices is rising interest rates. Central banks raise interest rates to snuff out inflation and when this happens, capital investment slows, earnings growth moderates or declines, and fixed income becomes a more competitive asset class as rates rise. This has not happened in this cycle. The yield on Federal Funds and three-month Treasury Bills are still near zero while the Thirty-Year Treasury Bond yields less than two percent. Equities do not have competition from cash or bonds yet. Equity valuations by many measures are historically high but are reasonable if you compare them to interest rates. Equity multiples will and probably should remain high while real interest rates remain negative.

What we have now is a strange brew of labor tightness, supply-chain bottlenecks, higher inflation, much higher earnings, and only modestly lower earnings multiples all coexisting in a pandemic that is hopefully near its end. How long this can continue remains to be seen. If the Federal Reserve and other developed markets’ central banks remain unwilling to raise rates above inflation for fear of killing the recovery, this market environment will likely continue. We still appear to be in an era characterized by secularly lower interest rates for several reason that we have highlighted in the past. Policymakers have signaled that they will move from very accommodative to accommodative in 2022. NPP thinks precious metals will do better in 2022 than 2021. They still serve as a useful diversifier in an uncertain world. We believe bond yields will rise modestly in 2022, but the broad indices should generate slightly positive returns. NPP expects equity markets to be much choppier in 2022 despite and partially due to the likely end of the pandemic. We think multiple contraction will be offset by earnings growth that should remain robust in 2022. This is consistent with prior cycles and should set up investors for a decent 2022, even if it feels like a letdown after 2021.