Stocks and Bonds Diverge in the First Quarter

Equities recovered from their March 2020 plunge to generate strong returns last year. Bond markets rallied strongly though August 2020 before stabilizing and generating solid annual returns. The first quarter of 2021 saw the returns of the two major asset classes diverge. The equity markets continued to rally based on the economic recovery and the outlook for earnings.  However, bond markets in the US saw declines as interest rates began to normalize back to 2019 levels.

The S&P 500 performed well in the first quarter and ended up 5.77%. The S&P Midcap 400 rose 13.12% while the Russell 2000 Index of small-cap stocks rose 12.44%. The rally was also more broadly based than last year as each of the eleven sectors ended up for the quarter. Cyclical sectors led while defensive sectors lagged. The top performing sector was energy which rose 29.27% but still has further to go to offset the 37.31% drop in 2020. It was followed by financials which benefitted from the steepening yield curve. Utilities, consumer staples and healthcare all underperformed the S&P 500. The information technology and consumer discretionary sectors led the S&P 500 higher in 2020 but rose just 1.74% and 2.94%, respectively, in the first quarter.

Meanwhile, the first quarter was difficult for bond investors. the Bloomberg Barclays Aggregate Index fell 3.37% while the Bloomberg Barclays Intermediate US Government/Credit Index declined 1.86%. Intermediate and long-term bond prices fell due to the rise in Treasury yields. The rise in yields was more dramatic on the long end of the yield curve. Ten-year Treasury yields rose 0.83% while five-year yields rose 0.58% leading to losses for most bond investors.

Gold, which was a safe haven in 2020, fell 10.04% while economically sensitive commodities rose. Oil prices rose 21.93% for the quarter and the CRB BLS commodity index rose 14.17% as the global economic rebound continued. The relative strength of the U.S. economy compared to its developed market counterparts contributed to the dollar index rising 3.66% in the first quarter. 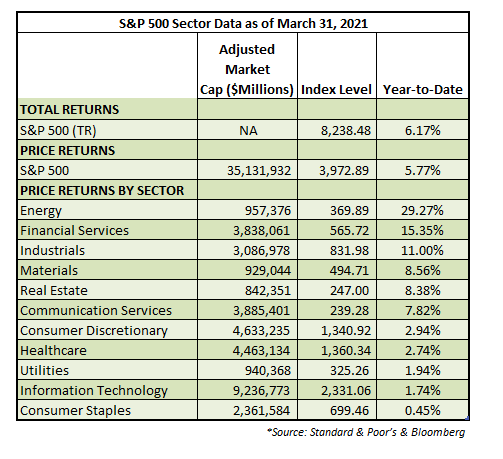 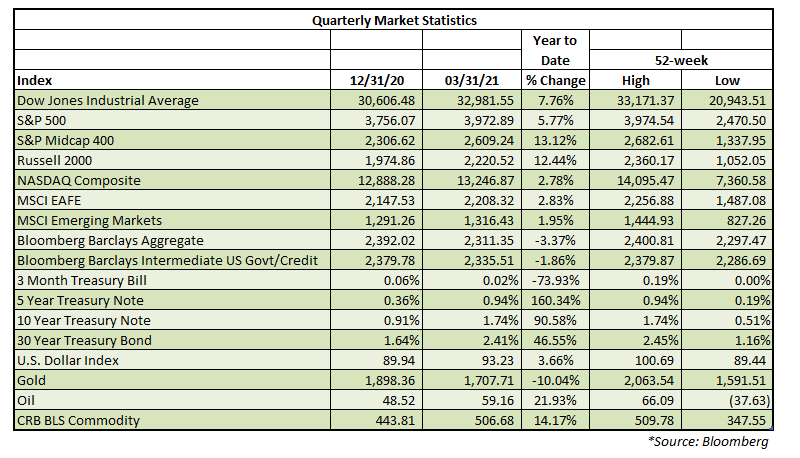 Equity market actions usually dominate the headlines, but the activity in the bond markets has been equally impactful this year. Bond yields have risen, especially on the long end where investors owning long-term bonds have seen significant losses in 2021. Ten-year Treasury yields rose 0.83% to end at 1.74% on March 31st. Short-term rates have barely budged as the Federal Reserve has pledged to keep rates lower for longer. A combination of factors including improving economic data, government stimulus, rising vaccinations, slowing case growth and a reversal of the lockdown/recession trade contributed to rising yields.

The rise in long-term interest rates was quick but has now begun to slow. We expect interest rates to rise on the intermediate and long end of the curve, but the rise will be more gradual. Risks still abound and a swift increase in interest rates absent an immediate reopening would probably hamper the coming recovery.

NPP thinks the greatest long-term threats to the bond markets are higher inflation and budget deficits which may or may not go hand in hand. Additional debt and deficits have not created inflation in Europe or Japan. Indeed, there is some evidence that the higher debt slows economic growth. Both economies are struggling to grow, and inflation has not been a problem. A sustained pickup in inflation would be a problem for bond investors and lead to a rise in yields. However, the current rise in inflation and inflation expectations seems to be short-term in nature. Markets expect somewhat higher inflation for the next year or two before moderating back closer to trend. A broad-based change in inflation expectations would almost certainly lead to sustainable rise in bond yields and a decline in bond prices. It does not appear we are close to that point as long-term expectations are in line with recent economic history.

The bounce after the economy bottomed in the first half of 2020 has been impressive, but it is nowhere near complete. The decline in employment has been massive, but hopefully it will not be long-lasting like the Great Recession. NPP is optimistic that jobs will come back once more people are vaccinated and the virus has started to wane. Unfortunately, we are not there yet although there are early signs of hope. The seven-day average of vaccination doses is up to about 2.83 million and rising, while 29.4% of the population have received at least one shot as of March 31st according to Bloomberg. Infections and deaths have declined significantly but new cases are still high and need to decline much more for a return to the pre-pandemic economy. Cases and hospitalizations have declined and hopefully herd immunity will be reached this summer. It is going to take time for restaurants, movie theaters, hotels, etc. to reach full capacity. They are currently seeing increased business in many geographies, but they are nowhere near 2019 levels. Employment has improved, but employment is still way below peak levels (see chart). It is likely that the service sector will start rehiring employees en masse once a full reopening occurs. We would be surprised if employment stagnates like it did after the Great Recession when an undercapitalized banking system and weakened consumer contributed to years of poor growth. 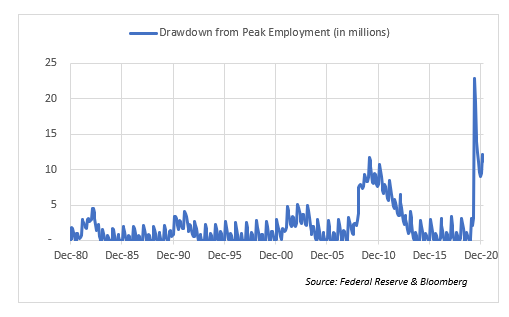 Despite the depressing employment figures, the average consumer is in fairly good shape. Those that are employed have benefited from strong wage growth, while government stimulus programs have helped the unemployed. If you look at consumer net worth or debt levels, American consumers are doing well. More surprisingly, income levels have grown thanks to government stimulus programs and an improvement in average hourly wages (see chart). This isn’t to say that everyone is better off. Employees on the low-end of the income spectrum have been hit harder and it could take them more time to recover. As more of the population is vaccinated, the service sector should recover along with employment. We are starting to see initial signs of this in certain regions. A rapid rise in vaccinated people out and about should lead to a quick rise in employment. Of course, when we say that we expect that the economy and employment will snap back quickly, we do so with a great deal of uncertainty. There are not a lot of historical examples to look to for guidance. The last pandemic was a little over a hundred years ago and it’s possible that virus fears may linger longer. Nevertheless, there are reasons to be positive and hope for a strong and fast economic recovery later in the year. 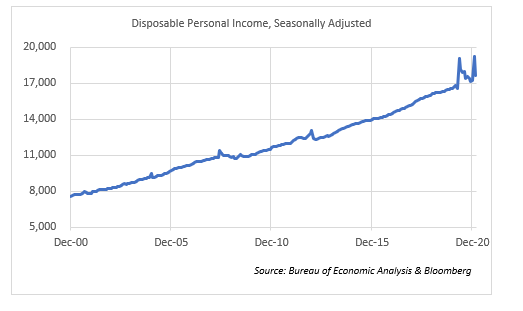 S&P 500 earnings are likely to hit an all-time high in 2021 despite an economy operating below trend. Companies have rationalized their operating structures and were fairly resilient during the pandemic. With GDP growth ready to explode, 2021 and 2022 earnings should rise to all-time highs and help support positive returns moving forward. Earnings estimates have moved higher recently. A compression in PE multiples is normal as interest rates rise, but earnings growth should more than offset multiple compression. 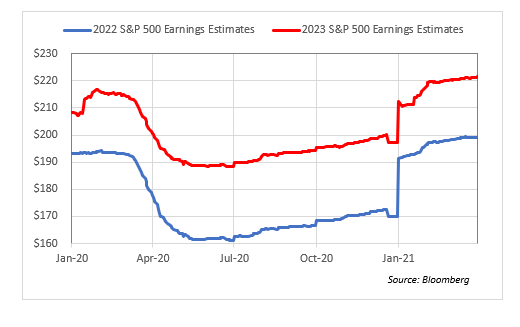 Positive Returns Expected for the Rest of 2021

NPP and market participants are looking for a robust recovery in corporate earnings. While the economy grows and earnings rise, it seems unlikely we will have a durable correction in the S&P 500. We do expect to see a pullback this year, but that should be used as a buying opportunity for those who are not overinvested in equities. Bond yields will likely move higher, but the increase going forward should be gradual and now is a much better time to invest in bonds than when the year started. At this point, inflation is likely the biggest risk to equity and fixed income markets, but we don’t think a sustained pickup is near. As such, we expect positive returns in equities and fixed income for the rest of 2021.